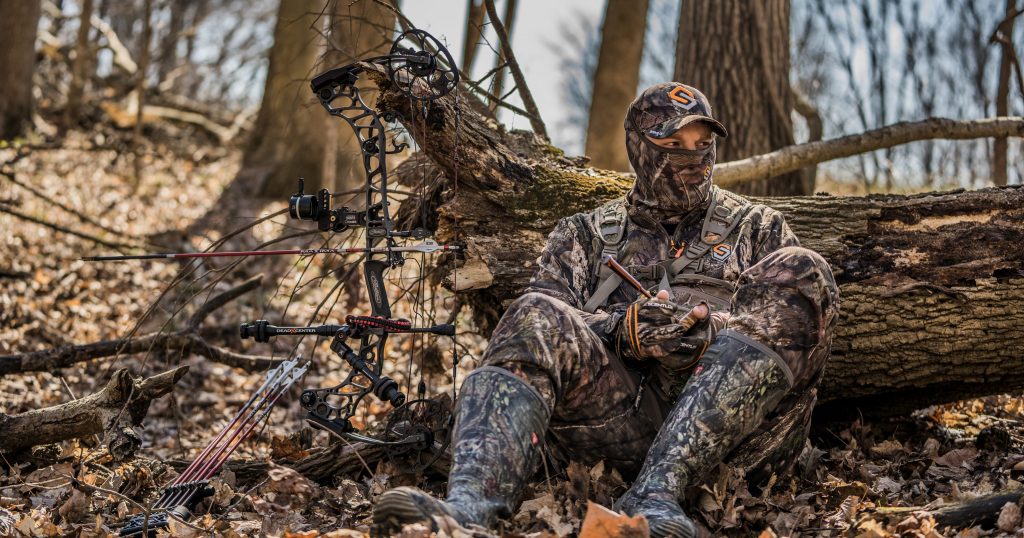 3 Tips To Score A Spring Gobbler With A Bow

Being able to harvest a mature gobbler during the spring can sometimes be a task in itself. Swap a shotgun for a bow, and the challenge increases to a level that few can achieve. Try these three tips to make your next archery turkey hunt go from wishful thinking to reality.

Over the past 30 years of hunting, I have learned that every hunt seems to be a new learning experience. It may be an experience of success, or it could be one of failure.

Several years ago, while participating in a disabled youth hunt, I recall an experience in which I realized that I could do better in my endeavors.

Around 3:00 p.m. on day one of the two-day Missouri youth season, I found myself tucked inside a ground blind positioned near the edge of a green pasture. With a couple of decoys in place a mere 20 yards from the blind, I began sparingly making a few yelps on an H.S. Strut diaphragm call.

As the evening began relatively slow, the first turkey entered the field. A lone hen began feeding towards our blind. As I continued to make a few soft yelps periodically directed towards the lone hen, to my surprise, I caught the attention of a group of nearby gobblers. For thirty minutes, a group of three gobblers and five hens worked their way into sight of our decoys. Gobbling all the way, the flock of birds made their way within steps of our blind. What seemed like an hour, the flock of hens and mature toms flogged our decoys, then moved on past the blind. Unfortunately, we were filming the hunt and never could get a tom, the camera angle, and our youth hunter in line to take a shot. The turkeys moved on without any harm, except to our pride.

On that specific hunt, the primary purpose for sitting in a ground blind was to keep our movement concealed and keep our youth hunter comfortable. The same goes for our decoy set up; they were in place to attract turkeys to our specific location and keep the attention off in the blind.

We eventually had success the following day with our youth hunter, the boy harvested his first turkey within the first hour of light. Yet, after recalling the hunt, lessons learned from the first-day evening hunt have helped me succeed going forward when bowhunting turkeys.

The youth hunt itself had nothing to do with bowhunting turkeys; after all, it was a hunt with shotguns that we were partaking in. Yet, it was the method in how we could get turkeys within close range without being seen that had my attention.

The hardest thing to achieve when bowhunting a turkey is to keep needed movement concealed enough to draw and shoot at a gobbler. Necessary movement is why using a ground blind can be effective.  During the youth hunt, needless to say, we had a lot of movement going on inside that blind with a nine-year-old boy, his father, and myself, yet we never got busted, even with turkeys a mere three to five steps away.

I still like to hunt turkeys with my bow from the ground without any cover. However, I will be the first to admit; one can get by with a lot of movement inside a suitable blind. 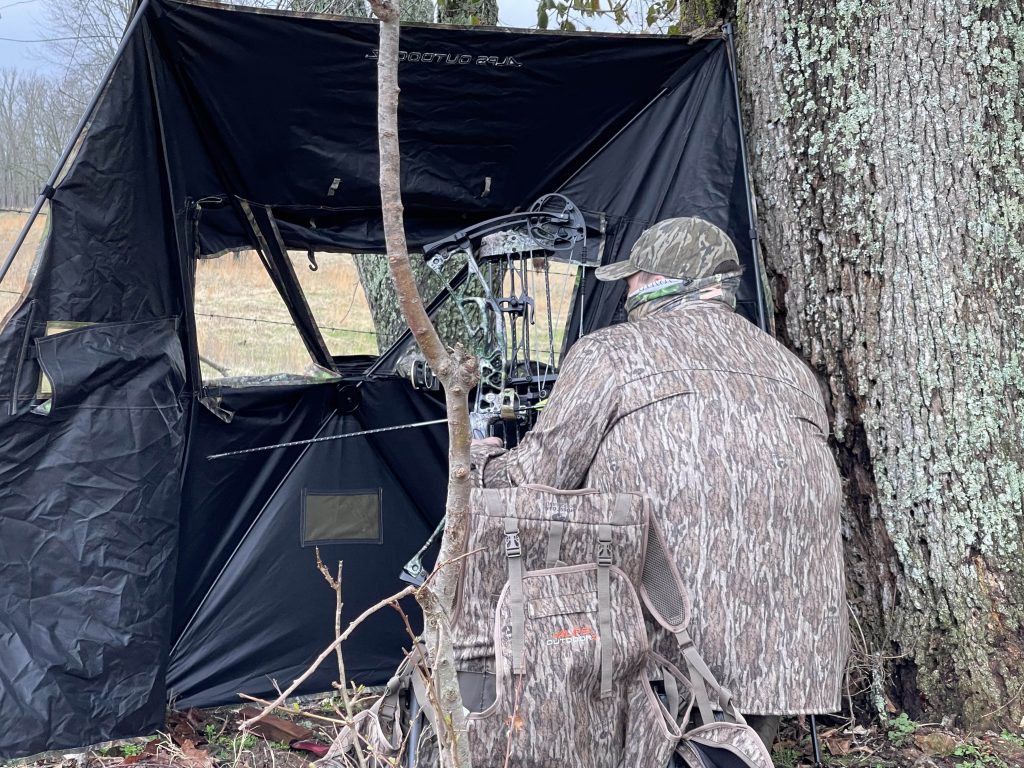 When bowhunting turkeys, a ground blind can be the secret factor that plays into the ability to successfully harvest a mature gobbler. For years I have used pop-up style blinds when hunting in or near fields and open areas. A blind offers the ultimate concealment to be able to draw your bow when a gobbler is within range. It also allows for the use of a box call or slate call, whereas usually, it would not be a possibility due to the risk of being detected by the approaching gobbler.

The only fault in using a ground blind when turkey hunting is the waiting game. It is ok if you are hunting near strutting areas or near a roost area, where you know turkeys will be. However, I love the run and gun style of hunting. Run and gun means calling, locating, and moving closer to be in a better situation before sitting and trying to call into shooting range. New technology in blinds makes it easier for this hunting style. However, many companies make smaller blinds portable. They are made for a fast setup and fast disassembly to tailor to the mobile hunter. ALPS Outdoorz is making a new blind called the Dash Panel Blind. The Dash Panel Blind is a single hub style blind that is a 3-panel constructed blind designed for the mobile turkey hunter.

When a hunter wears a complete camouflage setup, including head-to-toe coverage, especially a face mask and gloves, paired with new technologies like that of the Dash Panel Blind, bowhunters can run and gun and still have the ultimate concealment from the 3-panels. The bowhunter now has an unlimited amount of room to draw his or her bow without hitting the sides of the blind or feeling restricted, resulting in a poor shot.

Early mornings have always been my favorite time to hunt turkeys. Being born and raised in Missouri, I have become custom to hunting only mornings because of the daily cut-off time of 1:00 for legal shooting hours. During the earlier mentioned youth hunt that I had partaken in, legal shooting hours are extended for the two-day youth season to thirty minutes before sunset.

Being able to hunt all day during the youth portion of the season opened my eyes to late mornings and evening hunts’ success. While sitting in the ground blind with the youth hunter that I was mentoring, I witnessed how a wait-and-be-patient style of hunting can be highly successful during the latter part of the day. 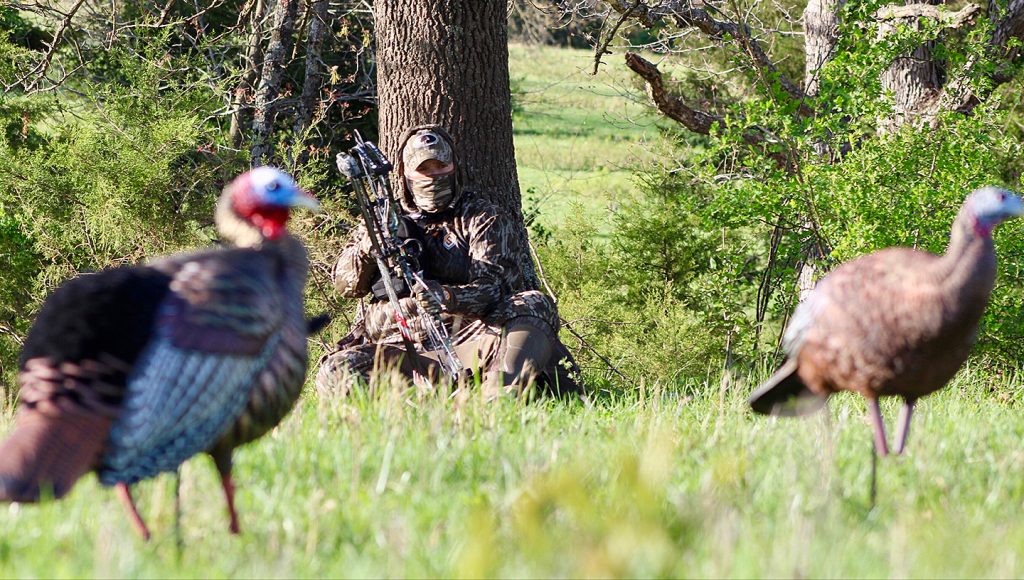 During the spring season, mid-mornings can be effective because hens leave the toms to go to their nest. Once a gobbler gets a little lonely, he will begin to respond to calls better than when hens follow along close by. The reason lonely gobblers are good for bowhunters is that when hens go to nest, toms go to areas where they can strut and show off to try and attract any hens who have not yet been bred. These areas are referred to as strut zones and are usually in a green pasture or open area where hens can see them from a distance. If one can find these areas by scouting before hunting, a ground blind can be in place days prior, and when ready to hunt, the hunter can sit and wait.

While on the youth hunt, I made mental notes of how one can wait patiently in a blind during late mornings or evenings. Suppose one will get in place and wait comfortably; the action that happens an hour or two before roost time will move you to the edge of your seat because of what occurs between gobblers and the hens who come back out before sunset.

#3 Use Multiple Decoys To Attract And Distract

A must for every hunter who wants to try their hand at bowhunting turkeys is a noticeable decoy setup. When I say noticeable decoy setup, that means not putting a lone hen in place and calling it good. The whole purpose of decoys is to take the attention off of the hunter. When trying to pull a bow back, decoys can be lifesavers. When bowhunting from the ground with or without a blind, I prefer using at least three decoys. My favorite decoy setup is two hens and a half-strut Jake. 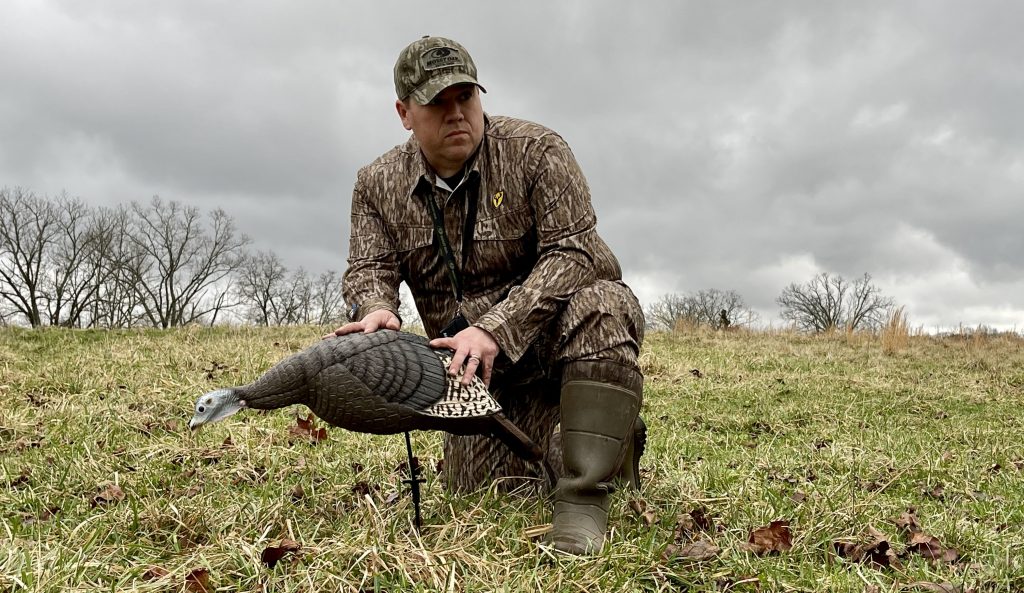 When placing my decoys while bowhunting, I place an upright hen decoy close to the half-strut jake, to add to the attractive set up, I place a feeding hen about 6 to 8 feet away from the other two decoys.  The feeding decoy adds a bit more to the eye of a distant gobbler. It sounds simple; however, a gobbler is more likely to pay more attention to a flock of three turkeys than only having one or two decoys in place. The third decoy feeding posture symbolizes that the area is safe from any nearby danger, making the tom feel comfortable enough to come to check out what is going on.

When I know that I must conceal more movement, whether it may be a kid hunting or bowhunting myself, the more distractions you can provide to keep the attention away from where the shot will be made, the more successful you will be.

While harvesting a mature gobbler during the spring with a bow seems daunting at first, this intimidating mission can quickly become a feasible achievement if the proper steps are taken. 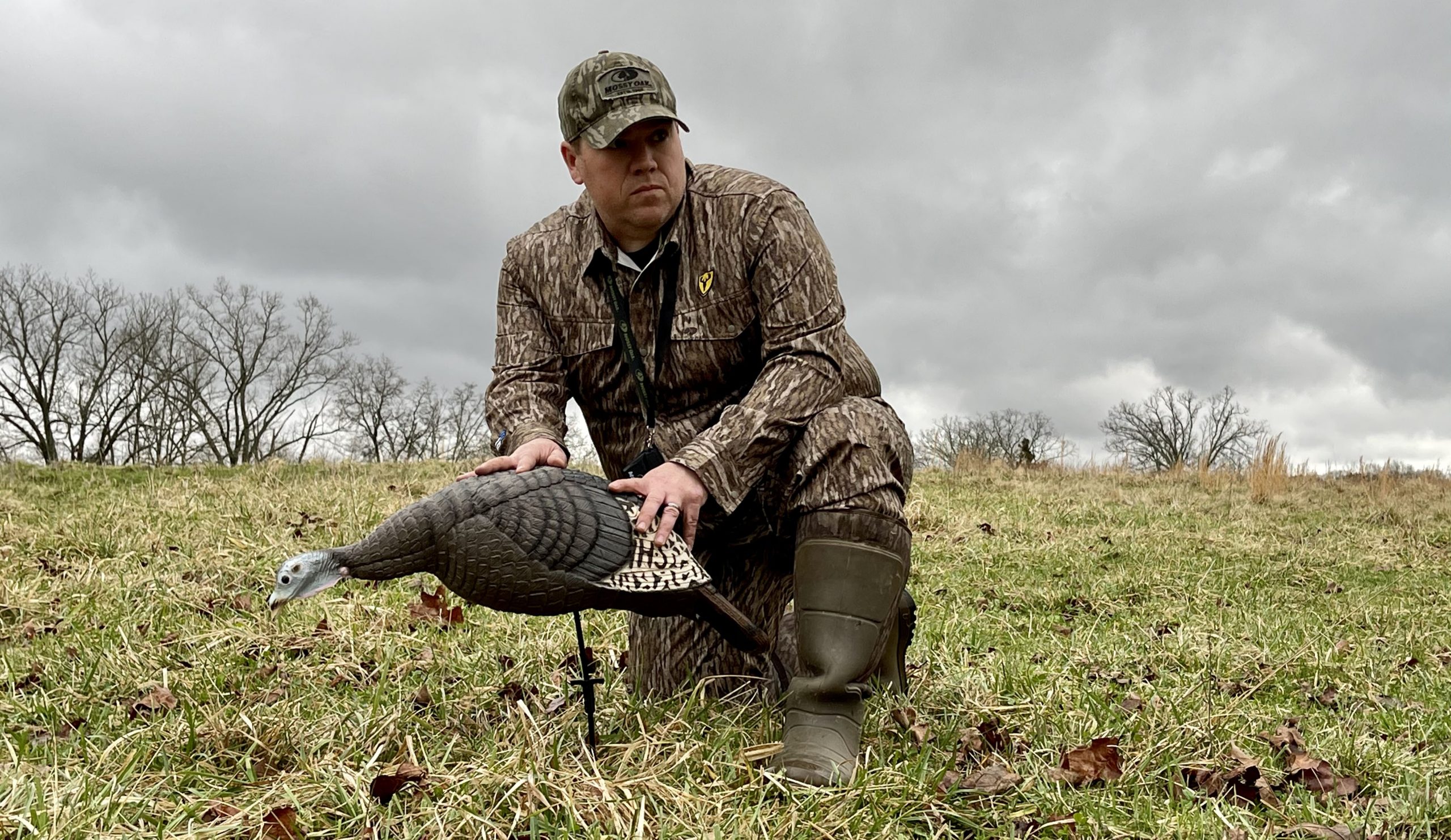 Heath Wood resides with his wife Faron and their son Carson in Mountain View, Missouri. His writings have been published in many major hunting magazines such as Predator Xtreme, Bowhunting World, Gun Digest, Turkey Country, and Game and Fish. As well as several websites and blogs for over 15 years. His favorite topics include, but are not limited to deer, turkey, and predator hunting. Wood is a member of the Mossy Oak pro staff where he can often be found sharing tips and stories through his writings on MossyOak.com. He has also appeared on Bass Pro Shops Outdoor World TV, Hunters Specialties The Stuff of Legends, Hunters Specialties popular DVD series Cuttin' and Struttin', and NWTF's Turkey Call TV. Heath loves helping introduce newcomers to the sport of hunting and working with the youth in any way possible. Wood also enjoys serving up delicious wild game recipes and trying to master his favorite BBQ dishes, many of which have been featured in hunting and fishing publications. This outdoor cooking passion has lead to Wood serving on the Traeger Grills Outdoors Pro Team.
All Posts