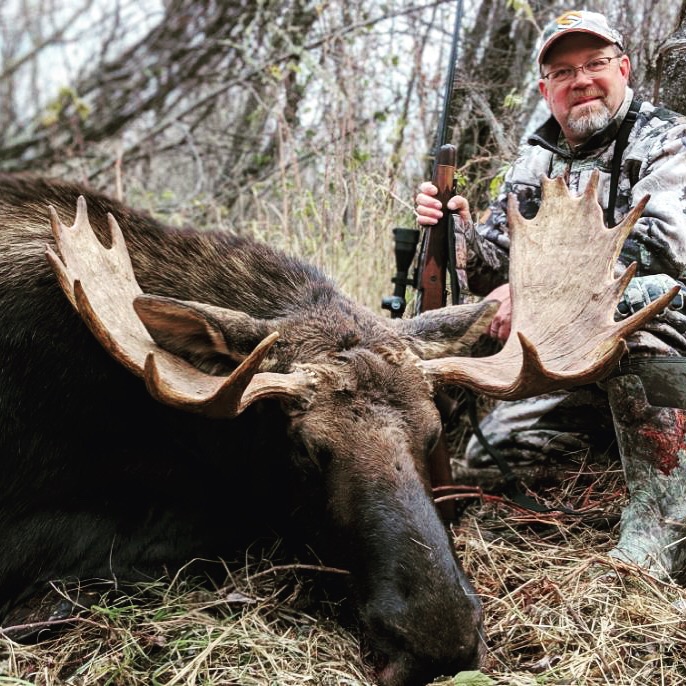 After years of waiting for an early-season moose draw, I was back in the forest to hunt the largest member of the deer family. The first week of October was set aside with plans to call a bull in close and fill the freezer with some of my favourite protein.

We walked about a kilometre into the forest and set up to call near a wallow we had located. You could smell moose, and the excitement of the hunt was building fast. A couple of long, love-sick cow moose bellows resonated through the tall aspens, and seconds later, the unmistakable clunking sound of a bull raking his antlers was heard. My heart rate doubled at the thought of coaxing a bull out on the first night of our hunt.

A second bull called from farther down the line, and we worked on drawing one of them near, but it didn’t happen. As darkness started to cloak the forest, we snuck out quietly with plans to return in the morning.

The alarm went off at 4:50 am, and after a quick breakfast, my thermos was filled with hot coffee. We set out to work on the bulls we had introduced ourselves to the night before and drove a series of roads and access lines to get in place before sunup. We hiked the last kilometre to keep noise to a minimum, and as legal light arrived, we were sitting near the wallow ready to call.

A series of cow calls permeated the calm, morning air. My ears were on high alert for a response, but it was my eyes that caught the bull cutting across the line at 330 metres. The bull stopped for a second to look in our direction but didn’t hang around for a formal introduction. We called and tried to coax the bull back, but he had vanished into the abyss of the big forest. We hunted hard for the rest of the day and never saw another moose.

Day three started at 4:50 am, allowing us to walk into a different spot to try calling. The warm sun didn’t help us, and after four hours of calling, it was time to go exploring. Looking for fresh sign and rutting activity is always time well spent. Moose are normally solitary creatures, but once the rut kicks in, they congregate in what I refer to as “rutting arenas.” We were finding small wallows and rut holes, but no serious sign where the entire area was torn apart.

Day four, the winds started blowing, making our calling efforts less effective. Moose have lived and survived in the forest for centuries and have always been able to locate each other even when it is windy. The keen ears of a big bull are enhanced by the antlers that work like radar dishes to capture sound and provide perfect triangulation to the source of the sound. Hunters are handicapped, not being able to hear the low, guttural sounds of an approaching bull over the wind. The fact that most moose circle downwind, means they get human scent long before they appear in the open. Strategy was required, and calling locations were chosen to draw a bull across a line to get downwind. The extra planning and sight location were all in vain, as the woods were silent, and the moose didn’t seem to be talking.

Moose hunting can be seconds, minutes, hours, and days of extreme boredom and frustration, but if a hunter can ride out the journey, the moose will eventually cooperate. Many of my moose hunts have been endurance tests to see if I could stay focused and withstand the pain of sitting in a spot for hours on end, hoping to eventually get a response. Bulls often don’t show up for days, but they know where the calls are generated. There is always speculation whether the bulls have cows or are just fired up for the rut.

Day five brought stronger winds, and the taunting of ruffed grouse along the trails led me to pack my 20-gauge over-and-under. Shooting a few birds made the lack of moose much more tolerable. The grouse were safe when we were calling but traveling to new areas meant any grouse was fair game, as it wouldn’t impact the success of the moose hunt.

The boreal is a productive region with ruffed and spruce grouse. Alberta also has some ptarmigan in the forest areas, but not where we were hunting. Ducks Unlimited reports that Canada’s boreal forest produces up to 40 percent of North American breeding waterfowl. There are 85 species of mammals, 300 species of birds, and 130 species of fish. The productive nature of this forest is home to up to 3 billion migratory birds during the breeding and nesting season. The boreal is a powerhouse for producing wildlife, and I was hopeful that it would provide a moose to add more excitement to the hunt.

Day six started out calm, and the area chosen was littered with fresh sign. Huge moose tracks pocked the mud, and I sat on the ground and ate low-bush cranberries sweetened by several bouts of frost, keeping my ears tuned for moose. Unfortunately, the wind picked up and made calling next to impossible. The wind gusts were fierce and forced a change of plans for the evening hunt.

We walked an overgrown cut line with short openings to provide a line of sight. With any luck, we’d spot a moose on the line or call one into an opening at close range. The wind continued to howl, and as the sun started to set, snowflakes flew in horizontal streaks. As we headed back to camp that night, we spotted a bull moose crossing the road in the dark. It gave us a starting point for the next day.

Day 7 had me feeling exhausted. Long days in the field and short nights of sleep were starting to catch up. The temperature had dropped drastically, and the wind continued to blow. We drove to a line that would intersect the country the bull had entered the night before. We drove in about a kilometre and started a slow walk up a line overgrown with alder. The further we got down the line, the more moose sign there was. A moose trapline was set by calling at a spot for half an hour then moving another kilometre into the forest where we’d call again. Over several hours we worked our way into an area littered with moose beds, rubs, wallows, and fresh signs. It was one of the moosiest spots I’ve ever found.

To work the trapline, we started back out and called at the spots we did earlier. We hoped to have brought a moose in from the original call and have it close by when we called again. We called at our last stop, and I stood still to listen for moose. Within seconds I could hear an animal walking close by, and then the faint grunt of a bull grabbed my attention. Seconds later, the bull produced a deep guttural grunt that left no doubt it was coming like a freight train. The bull’s antlers clattered against the alder limbs providing sound to track the advancement. In less than a minute the sounds were right on top of us, and I had to scurry around some thick tangles of brush to try and locate the bull. The bull had his head down swaying his antlers back and forth at 25 metres. I had to get on my knees to find a shooting window through the dense vegetation and quickly found the bull’s shoulder and squeezed the trigger.

After seven days of hunting, my moose hunt had finally come to an end. The days of boredom and frustration were replaced by minutes of excitement and exhilaration. I was able to get my Can-Am Defender 6X6 to the bull and winch the whole animal into the box for the drive to camp. The boreal forest provided one of its creatures as the bounty that will be enjoyed for months to come.