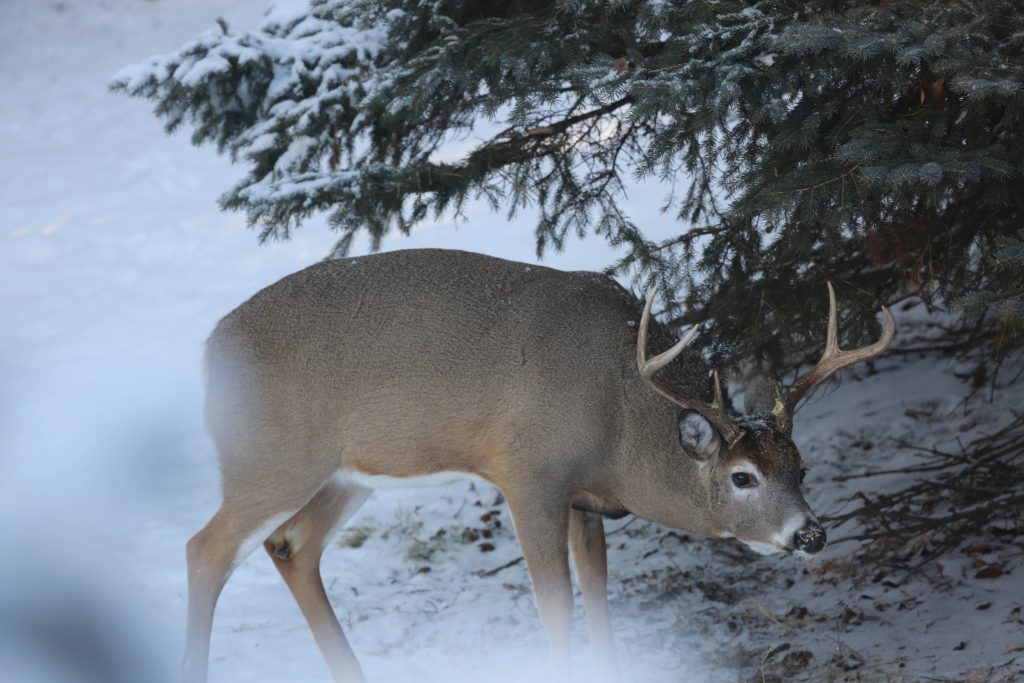 When I first laid eyes on the buck, my heart raced with excitement. The beams stretched out past the deer’s ears, andthe dark colouration made them took huge. I slowly lifted my binoculars to my eyes and locked onto the buck to get a point count. I shook my head as though it would clear my vision and looked at the deer again. The long main beams sported G1, or brow points, and G2s that were only average in height. The real surprise was that there were no other points. The buck was basically the biggest two-point or forky I’d ever seen. 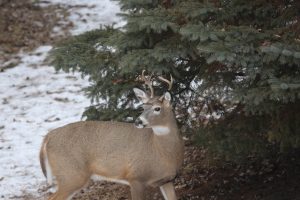 I dismissed the buck and let him chase does with a younger buck. They raced back and forth through the dense cover, sending the local does into a tither over their unsolicited pursuit.

I saw the buck several times and nicknamed him Forky the Pig. He had a big mature body and looked darker in colourthan the younger bucks he was running with. The hunting seasons closed, and I ran into Forky several times crossing the road or cutting through the backyard. He acted as though he was the dominant buck in the area and wasn’t afraid to fight with other bucks, even those with bigger headgear.

I thought about Forky lots during the winter and wondered if he was the buck doing most of the breeding with the local doe population. I normally scoff at the notion of deer management in Alberta, as Mother Nature seems to have her prescription with ugly winters that can set numbers back quicker than anything. I have passed on bucks hoping to see them the next year, but never seem to find them again. However, I was questioning my decision to pass on this particular buck, as I had several licences and could’ve easily removed the deer, and the forked-horn genetics. After all, we enjoy venison, especially the homegrown variety and the buck would have provided plenty of protein for the freezer.

I checked my trail camera photos and could tell that Forky had been a busy boy over the years. Several bucks have a basic two-point frame, and they never seem to get any bigger. One of the forkhorns I nicknamed Lump, as he had a bad case of lump jaw, causing a huge protrusion on the side of his face and into his neck. Lump certainly carries the genetic traits of Forky, and there must be some blood relation between the two.

My first encounter with Forky was three years ago. He was a mature buck then, and the following year his headgear looked exactly the same. His belly had swayed a bit, and his back was starting to droop, but he appears to be one of the dominant bucks in the neighborhood. 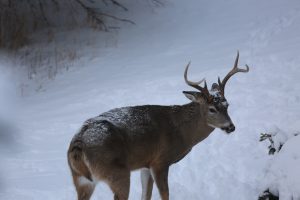 I decided to harvest Forky if given the opportunity and was willing to give up one of my tags to put him in my freezer. I wasn’t willing to call him a cull buck, as a big mature whitetail is a worthy adversary no matter where you find him. The old boy ran the woods with regularity but never gave me a chance for a clear shot during the archery season. I was confident I’d find him in November when I had my trusty smokepole along.

One of the things Forky is known for is running with other bucks. I don’t know if the younger bucks are attracted to him, or if he tolerates them, but there always seems to be an entourage of antlers wherever Forky shows up.

I was in my stand and caught sight of the wide, dark antlers I knew so well and prepared myself for the shot. I nocked an arrow and as I watched him close the distance, a second buck came into sight. My attention quickly switched to the newcomer, who sported five points on each antler. I could tell the ten-point was younger than Forky, but his antlers were big enough to change my hunting plans. Forky got a pass, and my antler greed cost me the opportunity to use a tag. The ten-point, like most younger bucks hanging with Forky are always nervous like they’ve been beaten up once or twice. Although I could keep track of the antlers, the body was never in a place where I could thread an arrow.

Forky survived another season and taunted me with regular sightings. I talked openly at home about taking the buck the first time I see him during the next open season. It was as though Forky had thrown down the gauntlet and challenged me to try and harvest him.

Season three started with Forky photos at his regular scrapes. I don’t know exactly where the old boy lives, but it has to be close by, or he changes up his pattern depending on the rut and other things that pressure a deer. Forky looked the same as he did the other two seasons. The antlers never grew or shrunk an inch. They looked like the same antlers from the previous years, as though he never dropped them. I likely could’ve convinced myself of the silly notion but saw Forky after he had dropped his antlers the previous winter. 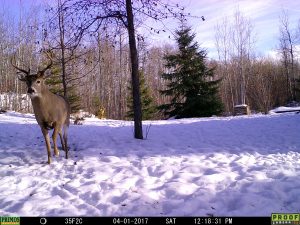 The rut seemed to come early, with lots of deer activity in the backwoods. I was in my stand and enjoying the opportunity to watch a few does feeding when the boys showed up. It was Forky and a smaller buck, and they wasted little time putting the run on the does. Deer were darting in and out of the woods, and before I knew it Forky chased the biggest doe over a hill, and I could hear them crashing far away. I was prepared to shoot Forky but once again was not given the opportunity.

I thought my hunt for the day was over when I heard crashing in the bush. The big doe was running directly down the trail in front of me and seconds later Forky appeared hot on her trail. I bristled with excitement and prepared myself for the opportunity I had been waiting for when it happened again. A much bigger buck came over the hill behind Forky and after getting one glimpse of the antlers I completely switched gears. Deer ran in and out of dense cover. Bucks chased does. Bucks chased bucks. It was a show like I had never seen before and when the big deer stepped into the open, I squeezed the trigger on my Traditions .50 caliber muzzleloader. When the smoke cleared, all the deer were gone, except for the big boy I was about to tag. 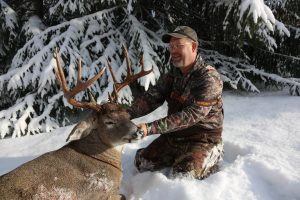 When this year rolled around, I was certain I’d get old Forky. He has been taunting me for four years, and I’d have to say that luck is the only thing that has saved him. There weren’t as many deer around this fall, and the ones I did see didn’t generate much excitement. I knew old Forky was around and the photos showed him looking like a grandpa with a swayed belly. Perhaps Forky is on to me and where I like to sit and watch? Perhaps seeing one of his buddies get shot was enough to make him more invisible?

I hunted the entire season without a chance at Forky. It seemed a little strange and made me wonder if one of the neighbors had shot him, or if he just found a better habitat to hang out. The season closed, and I felt cheated not seeing my old adversary, but I should’ve known he’d get the last laugh.

I was working in my office the week after deer season and looked out the window to see a doe darting through the trees. Seconds later, Forky appeared, hot on her heels. The old boy was up to his old tricks, and all I could do was watch. I chuckled to myself and bowed with respect to the old whitetail buck. I sure hope old Forky makes it through another winter to provide me with more entertainment and challenge next season.