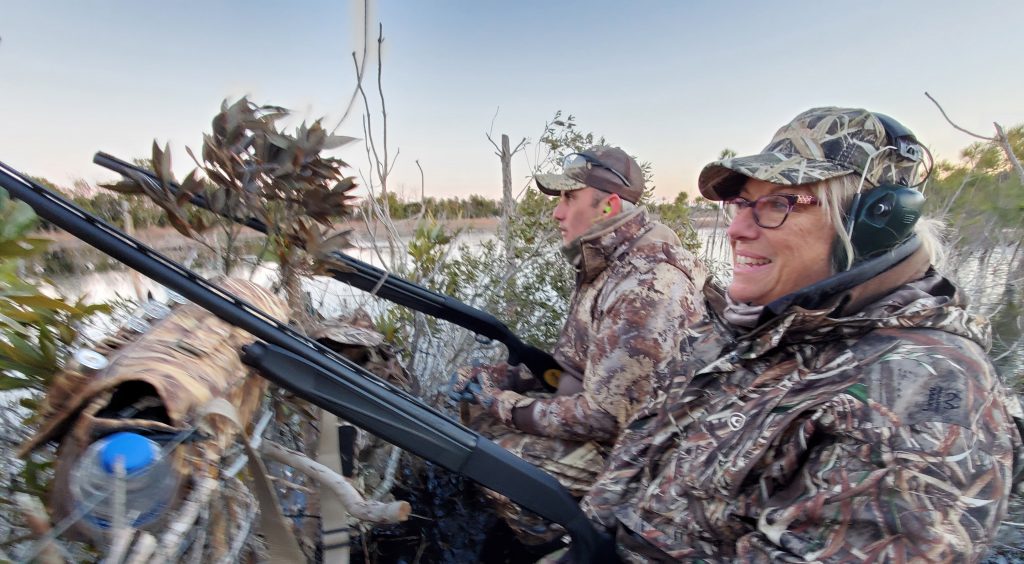 I love waterfowl hunting, but to be clear, I don’t think of myself as the world’s greatest duck and goose hunter (I am a turkey hunting legend in my own mind). The rugged Appalachian Mountains that I hail from is not exactly considered a waterfowl mecca. We have some ducks and geese, but it’s a drop in the bucket compared to what other states have for waterfowl numbers. So, you can see why I was thrilled to be on a waterfowl hunt in North Carolina, near the fabled Outer Banks. We were there in late January, and it was cold, I mean way colder than you would expect in the southern state of North Carolina, but it’s duck season, right?

I glanced over at Linda Powell and fidgeted in my waders. It was cold, not Arctic Circle cold, but twenty degrees with a stiff wind is chilly. I was dressed for it and not in bad shape other than a nagging feeling I might have a small leak in my right wader. Along with outdoor writer Brad Fitzpatrick and our guide Robert Manning, Linda and I were sitting in a partially submerged duck blind near Engelhard, North Carolina. Ducks were flying, our shotgun barrels were sometimes warm to the touch, and I was happy to be there on a day most duck hunters dream about.

When twenty green-wing teal come screaming in low over your blind to hit your decoys, they make a sound that is hard to describe. Their wings cutting the air makes more than a swish but less than the blare of a jet. This sound makes duck hunters hunker lower in the blind, and Labrador duck dogs roll their eyes as they shiver and wait. Our guide Robert keeps up welcoming chatter on his duck call and finally says, “Ok, take ‘em!” Linda, Brad, and I rise as one and start banging away. I keep up my streak for the morning by missing three times. Teal may be the fastest ducks around, and these guys have a significant tailwind. It’s like shooting at bees in a hurricane.

Cold ducks and chilly weather aside, I am thrilled to be here. Along with Brad and Linda, we are here to put the new Mossberg 940 Pro Field Autoloading Shotgun through its paces.

Linda Powell is the Director of Media Relations at Mossberg. She had us booked with Dare to Hyde Adventures at Swan Quarter, North Carolina. We are staying at their Lake Mattamuskeet Outpost. Dare to Hyde Adventures offers a wide variety of hunting, fishing, and wildlife viewing opportunities in this area. They may be best known for their world-class duck hunting and guiding their clients to the largest black bears in the world. This area has vast crop fields of corn, soybeans, and wheat, with many almost impenetrable swamps all around. The local habitats make for a bear smorgasbord with plenty of nearby cover. As I understand it, these bears do not hibernate, so they basically can stay up all winter and eat, unlike the mountain bears in my state. All of this adds up to bears reaching a monstrous size, and Dare to Hyde reported their average bear taken this past season was over 500 pounds!

We are here for the ducks. However, on our first day in the blind, we are not disappointed. Robert, the guide, keeps the duck calls going, and we keep the Mossberg 940 barrels warm. I am shooting a lot of Kent Cartridge shotshells but not reducing the local duck population as much as I would like. Fellow outdoor writer Brad did a very unselfish thing in the morning by missing the first duck so we would not feel too bad when missing later. I really appreciated it! 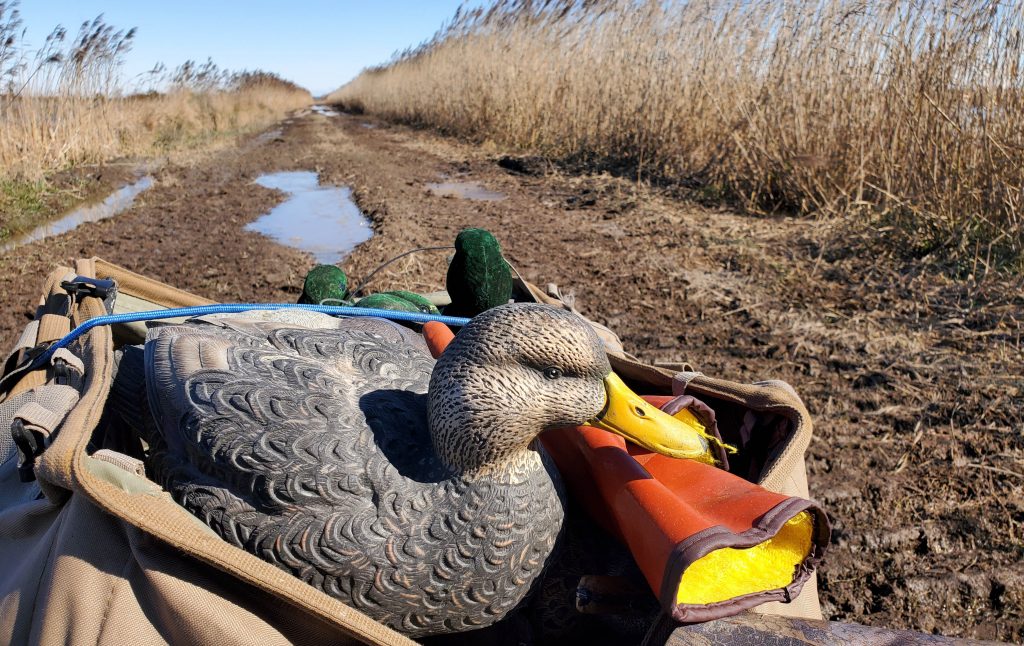 Even with these temps, when the ducks are flying, we don’t seem to notice it. Robert never stops scanning the sky, he keeps the duck chatter going, and when they come barreling in, we keep the barrels on the 940’s hot. It’s a mixed bag of several teal (surprising to me, this late) gadwalls, widgeon, and some ringnecks. The Mossberg shotguns perform without a hitch, we continue to bang away, and as more ducks come to visit, I don’t think as much about that leaky wader.

As always, our stay in this beautiful part of North Carolina was much too short. We had great food in the evenings with the guides and staff at the Outpost, where we were made to feel like family. The hunter’s banter around the table with this bunch of young guides made you want to stay and visit much too late, but duck hunting mornings start really early. It all went by way too fast. My family and I visit the Outer Banks almost every summer, and I often look across Pamlico Sound and think, “Wonder what is over there?” Well, I found out, and I like it. I will be going back, for the ducks, maybe the bears, and the beauty and wildlife of this wonderful place.

The 940 has descended from the Mossberg 930 line of semi-auto shotguns, which I have had some experience with. I took a Mossberg 930 to Gunsite Academy in Arizona a few years ago and went through a grueling shotgun course. The 930 did nothing but eat ammo and shoot for three days in the desert sand. In truth, I didn’t see much room for improvement with the 940 model, but Mossberg did it.

Working with world champion shooter Jerry Miculek, Mossberg gave the 940 a redesigned gas system that can run upwards of 1,500 rounds before cleaning. In the semi-auto shotgun world, that is impressive.

New design features include an oversized bolt release and charging handle (great for hunters with bulky gloves), an oversized, beveled loading port with a redesigned elevator, and shell catch for efficient and consistent loading. A slimmer profile forend is used. The length-of-pull can be adjusted from 13 to 14.25 inches for a completely adjustable stock system. All of these features are great, which you will see when you grab a 940 Pro Field. 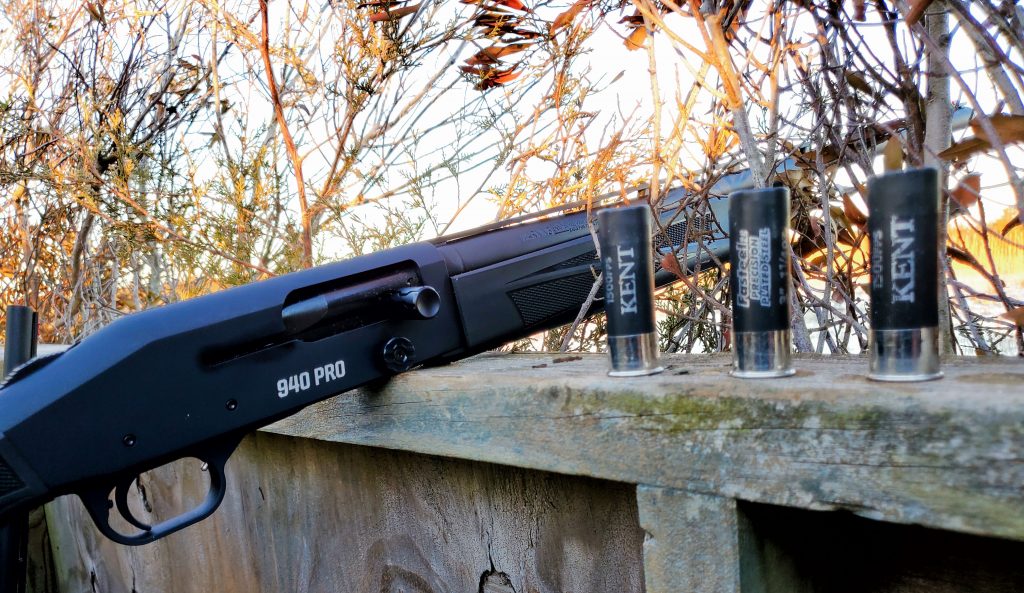 A problem with many shotguns is that they do not shoot where they look. That is, the point of aim (PIO) does not match the point of impact (POI). Many of us don’t know this because we never pattern a shotgun on paper. Mossberg engineers worked to design a new barrel-making process for the 940 that ensures the consistent production of a platform that will allow a user to maintain an accurate point-of-aim/point-of-impact when utilizing quality factory-made ammunition.

The internal components of the 940 Pro gas piston/rings, magazine tube, hammer sear is nickel boron-coated, and the return spring plunger is hard-anodized aluminum. Combined with the self-draining stocks, the 940 autoloaders are corrosion-resistant, reliable functioning autoloaders. This is important. No other shotgun gets the abuse a waterfowl gun does. Rain, snow, ice, mud, goose blood, and Labrador slobber are all part of a typical day. This shotgun will also be offered in a camouflaged/Cerakote waterfowl model and snow goose model with an extended magazine.

Some of the 940 Pro Field specs include a 28-inch vent rib barrel equipped with a fiber optic front sight and includes three AccuChoke choke tubes (full, modified, and IC). Completing the package is an aggressive Mossberg signature texturing on the forend and stock; sling swivel studs; 5-round capacity; drilled and tapped receiver; and the convenient Mossberg ambidextrous safety, right under your thumb on the back of the receiver, where it should be. This is a lot of shotgun for an MSRP of $866 (as always, street price will be less) 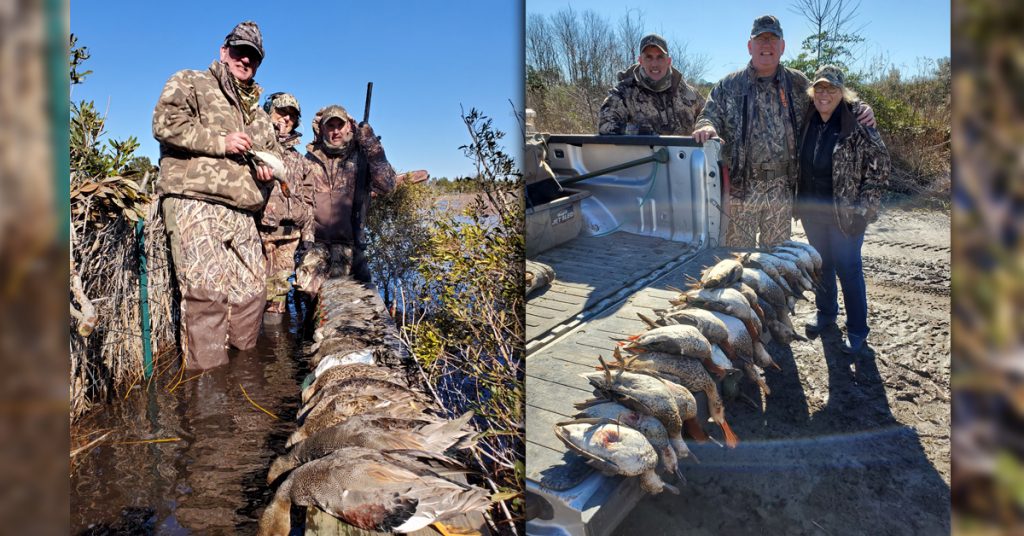 Mossberg launched several new 940 models in early September 2021 that include two, besides the Pro Field, that waterfowl aficionados will appreciate. Both were designed from the 940 JM Pro platform used for competitive shooting. The new features and improvements described above for the Pro Field area are also in the Pro Waterfowl and Pro Snow Goose, but there is more.

The 940 Pro Waterfowl is a workhorse under any conditions waterfowlers face. The 28-inch vent rib barrel is equipped with a HIVIZ TriComp fiber optic front sight with interchangeable pipes, self-draining stock, and a chrome-lined barrel. Patterns are controlled with an AccuChoke, or compatible X-Factor ported choke tube. Waterfowl enthusiasts will love the Patriot Brown Cerakote finish on metal surfaces of the receiver and barrel, which pairs visually with the TrueTimber Prairie-camouflaged stock. The 940 Snow Goose is a performance-driven shotgun for reliability and consistency under any conditions. MSRP: $1,050

The 940 Snow Goose features a 28-inch barrel and extended magazine tube that can load up to 12 rounds of 2 3/4-inch shotshells, plus one in the chamber. The Snow Goose model also sports the HIVIZ TriComp fiber optic front sight, and extended X-Factor ported choke tube, which is fully compatible with other AccuChoke tubes. This new 940 would not be complete without a Battleship Gray Cerakote finish on the receiver and barrel. The stock is finished in TrueTimber Viper Snow camouflage. Covering all of the bases, the Snow Goose has a self-draining stock and chrome-lined barrel. Serious snow goose hunters will love the specialized features for white geese in the fall and spring. 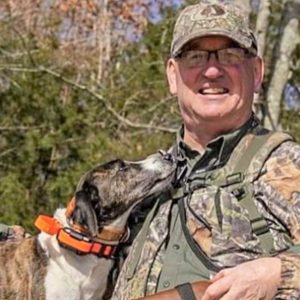 Larry Case hails from the mountain state of West Virginia, and has been a shooter, hunter, and outdoorsman his entire life. Larry served 36 years as a DNR Law Enforcement Officer, retiring with the rank of Captain. Although he leans toward shotguns, he enjoys all firearms and any kind of hunting. He owns too many dogs, not enough shotguns, and is forever looking for a new place to hunt. Larry loves to mentor new shooters and hunters, especially those who have been misinformed by Frank Melloni. You can catch more Larry's entertaining perspectives at GunsandCornbread.com.
All Posts