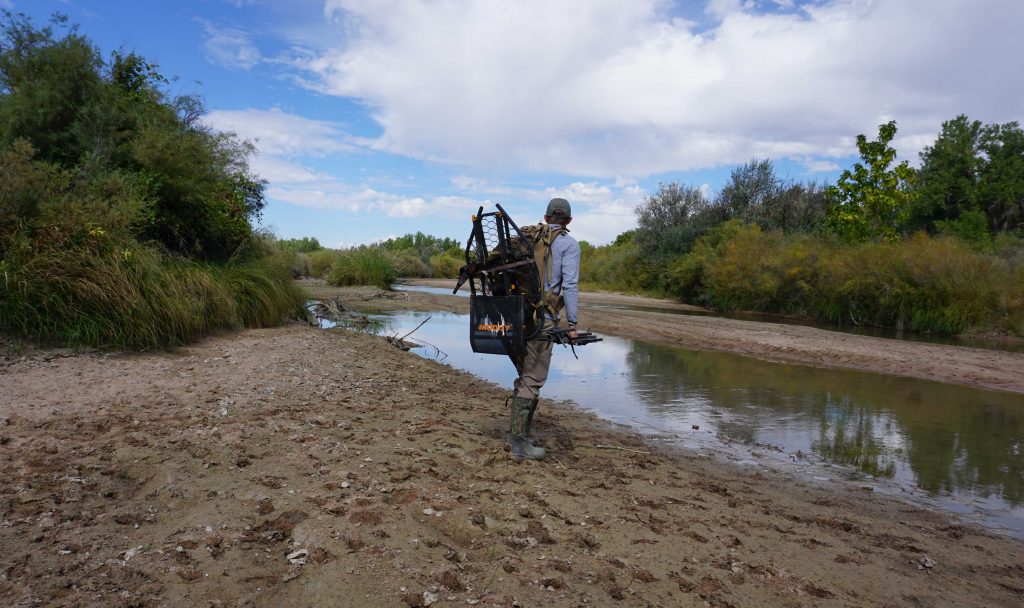 Muddy’s Boss XL Hang On Is A Hang-On Win

A worthy hang-on that’s sizeable, quiet, comfortable, and built like a tank, Muddy’s Boss XL Hang On is worth putting in your favorite kill tree.

I have an affinity for treestands. One could call me a collector. Since I fell head over heels in love with the whitetail game ten years ago, I’ve been hunting for the perfect stand.

There is a large shed in my backyard, and lock-on, ladders, and climbers take up a chunk of its square footage. 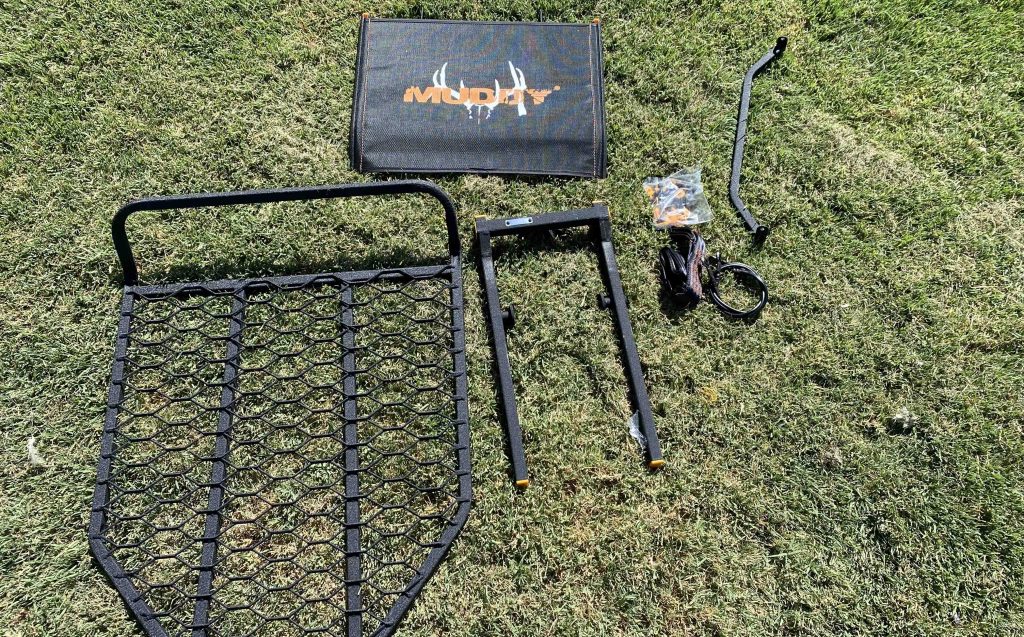 What I have learned is that I’m a lock-on guy. I don’t care for climbers, not because they don’t serve a purpose, but because there aren’t many straight trees in my hunting areas. Ladder stands are pretty sweet, and I like the concept, but I wouldn’t say I enjoy hauling all the pieces to off-the-beaten-path trees. Plus, I never feel like I can get in a tree high enough after losing a foot or two to angle the ladder, and I hate feeling like I’m climbing straight up. The worst thing about ladder stands is that one of the ladder rungs will pop or creak at some point, and it’s just too much metal for me.

Enter my go-to, the all-powerful lock-on treestand. These things come in all sizes and weights. Some are heavy, and some weigh less than 7 pounds. Some will go in trees that look like they don’t have a single straight branch, and others need a perfectly vertical section. Some have seats that remind me of a La-Z-Boy recliner, and others are like concrete. As I mentioned, I’ve been searching for the perfect lock-on for a long time.

I want something durable, sizeable, quiet, lightweight, comfortable, and one that features adjustments to get in any tree I find. That’s not too much to ask, right? 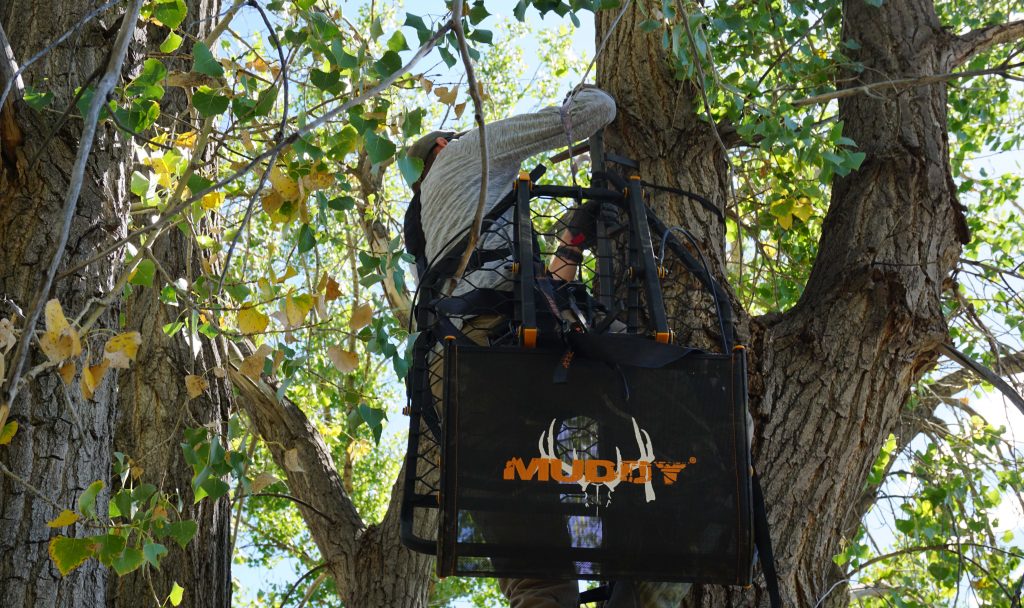 Muddy’s The Boss XL looks like a typical lock-on until you pull it from the box and inspect it. Jumping out at me from the get-go was the coating. I wasn’t sure what it was called at the time, but I loved it. It had some texture, making it gritty, and I knew that would help with grip. Plus, I figured Muddy added the coating for a reason, likely to weatherproof the steel, prevent rust, and ensure seasons of flawless use. I also assumed the layer would keep the stand hushed and avoid game-spooking metal against metal.

Muddy calls it Fiberguard, and it’s brilliant. My next significant notice was that I wouldn’t have to hire someone with an engineering degree from MIT to put it together. The stand comes assembled chiefly; all that’s required is the attachment of the seat, under-seat bracket, and the coated wires that run from the seat frame to the platform. The platform, including the fixed footrest, comes assembled from the factory.

I had the stand assembled in less than 20 minutes, and while my battery-powered Milwaukee with a 5/16 nut driver would have sped the process up, I chose to enjoy the sunshine and use a wrench and a ratchet/socket set. This thing is a breeze to assemble. The only thing to ensure is you use the appropriate number of plastic orange washers, which will be located in a sealed plastic bag along with the nuts and bolts. You’ll find exactly how many to use and where to use them in the instructions, and it’s essential to get them in the right places so the stand pivots appropriately and there is no metal-on-metal contact. 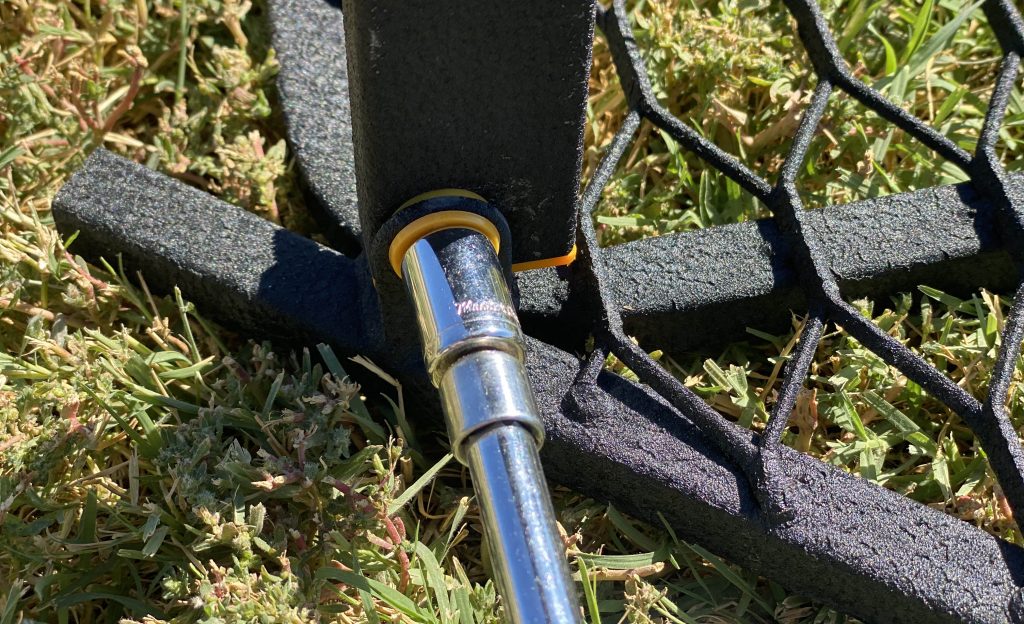 Once assembled, the stand has a classy look, and I love the Muddy brand smeared across the Flex-Tek seat. I was also a fan of the one-piece fastener system — a 1-2″ Silent Slide Buckle Strap with looped ends that slide over a pair of extend-out-from-the-seat-frame knobs.

Weight was an initial concern; the stand pushes the scale to 19 pounds, and when I wander public-land dirt, that weight rating is a bit much for me. However, when hunting my close-to-home Colorado lease, and the walk from the truck to a likely stand tree is usually around 1/4-mile, I figured the weight would be fine.

The platform is a gem. It measures 25″ wide by 34″ deep and, as previously mentioned, is fitted with a fixed footrest. I love a sizeable platform; it gives me stand-and-shoot confidence and is what you want when making that all-day November sit.

Of course, I’d digested plenty of literature about the Flex-Tek seat, which looked super comfy. I appreciated that the seat flips back and out of the way and doesn’t fall or creep forward once in the upright position. I credit this to the stand’s design and those orange washers I referred to earlier in the piece. 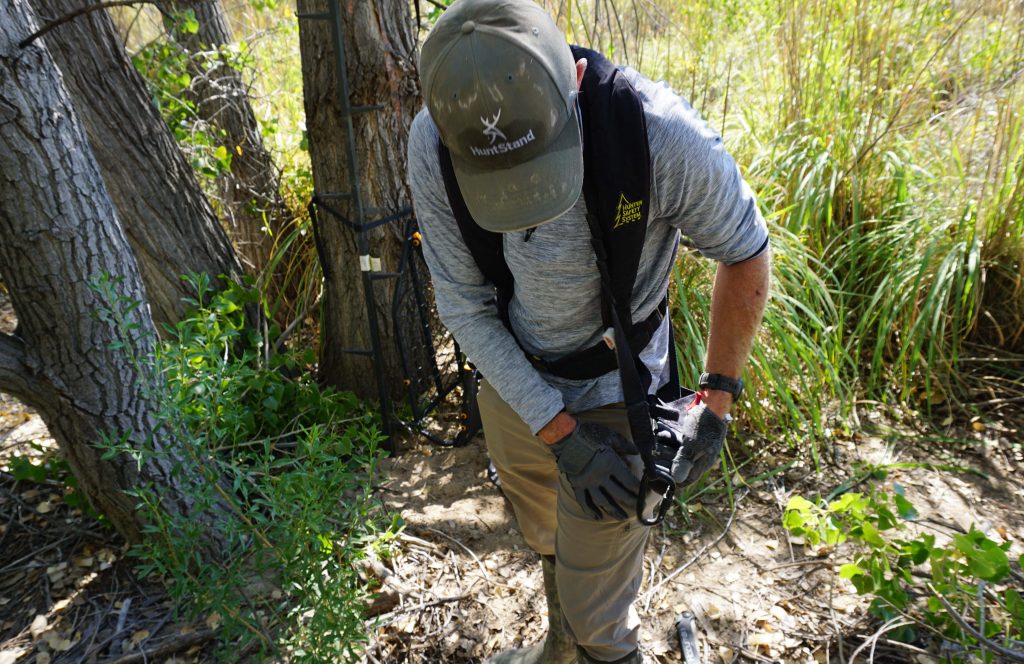 After lashing the stand to my ALPS Hybrid X along with a few climbing sticks, I was ready to get The Boss XL in a tree. I was surprised how well the 19-pound stand and sticks felt on my back, and while the stand was sizeable, it hooked up to the pack and toted easily.

Muddy’s Boss XL will fit trees with a minimum diameter of 9 inches, so it’s not designed for toothpicks, but the branch I chose was just a tick over 9, and it snugged up wonderfully. The Silent Slide Buckle Strap was easy to manipulate, and the stand was up in minutes. Though the platform is significant, I was surprised at how maneuverable the stand was in the tree. After setting my Hunter Safety System’s Lineman’s Belt, I was able to hang hands-free and get things exactly how I wanted them.

Once set, I stepped on the stand, and my body’s weight set it firmly. The frame didn’t wiggle or move, and the all-steel construction gives it a great under feet and under butt feel. As for the Flex-Tek seat, I will haul the extra weight to sit on a cushion that feels like a cloud. If you’re like me, you put long hours in a whitetail stand, and when your butt goes numb, and the back starts to ache, the mind starts thinking about getting down. 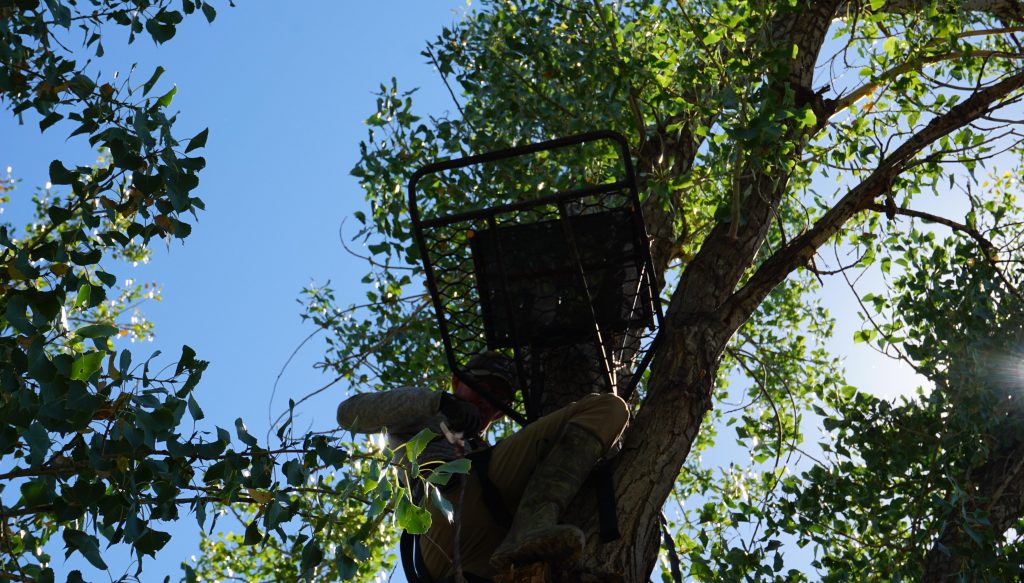