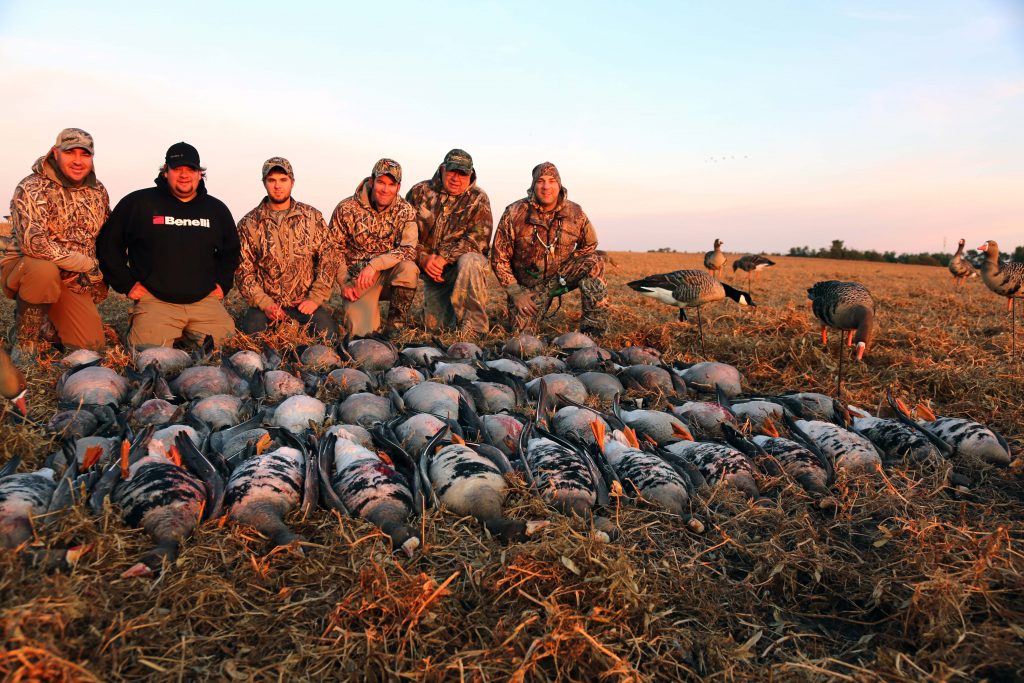 We had watched the harvested pea field four days, and the number of birds enjoying the high-protein feed just continued to build. I was hunting with several friends who had never shot a specklebelly goose, and their excitement was impossible to hide.

When hunt day arrived, we rolled into the field, and I opened my waterfowl trailer to set up a wide array of decoys. Most of the birds in the field were specks, but there were enough Canada geese and ducks to make us pay attention. It took about 40 minutes to place decoys, brush in our blinds, and sit back to watch the eastern sky turn orange, signaling a new day was dawning.

Anxious to feed, juvenile specks circled the field in the dark. It was a clear day with a slight breeze, and we knew if we didn’t hit the birds early it was only going to get tougher as the day went on.

When the magic minute hit to load our shotguns, it didn’t take long for the first shots to ring out. Flocks of eight to 15 birds converged on our decoy spread and winged into range with vigor and excitement. Most were family units fresh from the north and anxious to build fat reserves before heading farther south. The birds were vocal, and the distinct three-syllable call made the birds sound anxious to get a morning feed. With well-seasoned shooters hidden in standup blinds, it didn’t take long to put birds on the ground. Shotguns roared, and excited hunters giggled with enthusiasm.

A flock of 11 birds decoyed as though they were being reeled in on a string. When the dust settled, only one bird flew away. In just 28 minutes we shot 56 geese and were arranging them for photos as the sun broke the horizon. It was a magical morning.

Adult specks are beautiful birds, each one having unique markings on their breast as individual as a human fingerprint. With a pinkish-orange beak haloed by a white ring, the heads are unmistakable. The specks or bars on the breast range from tiny dots to solid black bars. Occasionally, a bird will have a solid black breast where the specks blend to form on large marking. These brown-coloured geese travel to the high arctic to nest each spring and quickly raise a brood to return south before freeze-up. Specks are early migrants and often show up on the Canadian prairie in late Augustbefore the hunting season opens.

Speckle-bellied geese, also known as white-fronted, are early migrants. They head out of the high Arctic late summer to get ahead of winter. Their early arrival means there are plenty around for an opening day hunt on September 1st. And, the good news is they build in number quickly throughout the first month of the waterfowl season.

The hunt we had early in the season was extremely productive, as the birds hadn’t seen much hunting pressure, the majority were juveniles, and they came to the field in family units instead of huge migrating flocks.

We found another shoot a few weeks later and enjoyed a spectacular hunt with cooperative, decoying birds. The specks poured into our decoy spread along with some snows and Canada geese. The sun had barely cleared the horizon when we called the hunt finished and gathered our prized possessions for photos. We had some real beauties in the game bag, and several of my hunting companions latched onto birds that they wanted to take home for mounting. Specks are a trophy bird in the waterfowl fraternity, and with their limited range, most North American hunters never get the opportunity to hunt this impressive bird. Besides their outstanding beauty, specks are the absolute best table fare of any waterfowl I’ve hunted. Having a few specks to take home is always a bonus.

Our hunt was typical of an early-season foray in the parkland region, and I was pleased we were able to get on some specks before they headed farther south. The window of opportunity can be short, depending on the year and weather conditions. September is without a doubt the best month to target specks on their long journey south for the winter. In many ways, we are spoiled on the Canadian prairies, as the first shotguns arctic birds see is in our neck of the woods. Every time specks encounter hunters, they get warier, and their social structure quickly starts to change.

The first couple weeks of September see birds migrating and heading to the fields, where they feed, in family units. Two adults and three to six juvies are the norm. As adults get shot, and more birds arrive from the north, they start to stage in larger groups. Their family ties remain strong, and even though birds start to travel in groups of 50 to 200 by late September, the family units often separate once back on the ground. Like many Arctic birds, they seek safety in numbers when pressured. The adage of safety in numbers isn’t true, but it remains the birds’ defensive strategy.

Working specks to a decoy spread successfully is both an art and science. They will come into Canada goose decoys set up in a standard “U” or “V” pattern, but once the sun comes up, they get hesitant fast. I always pay attention to how birds spread out in a field when naturally feeding. When spotting a shoot, pay careful attention to how the birds congregate or spread out amongst the flock. There is usually a group that leads the pack to the best feed, which is normal for most geese, but where specks differ is how they spread out upwind of the main decoy spread. You will see adult pairs sitting 100 to 150 yards away from the main group, and family units of four to eight birds off on their own. Duplicating this pattern is imperative to success when placing decoys and the closer you simulate how they are comfortable in a field, the better your success will be.

Specks regularly feed with Canada and snow geese. A mixed decoy spread can be helpful, and, in many cases, several hundred snow goose decoys funneled around and ahead of the specks provides confidence to incoming birds.

Having speckle-bellied goose decoys makes a significant difference for consistent success. All arctic birds use their eyes extensively when coming in for a landing. It isn’t uncommon for the birds to slow down in flight and scan their heads back and forth as they look an entire decoy spread over with deliberate scrutiny. If they don’t like what they see,they flare off and don’t return. The first decoys that incoming birds should see in a decoy spread are specks. The full-bodied and shell decoys work— show the birds what they want to see. A couple of dozen speck decoys set in pairs and family groups work as a runway for the birds wanting to join the others on the ground.

Specks are not as vocal as snow or Ross’ geese, but they are used to communicating with their own. If you want to finish specks in your spread, you’ll have to learn to blow a speck call. Some of your buddies can be honking in the background, but you better be speaking the language to set the stage to entice incoming birds to the ground. I always have a mix of Zink calls to change things up on any given day. Specks are more apt to come to a snow goose call than a single Canada. The important thing to remember is these birds are social and used to communicating. Silence or a lack of calls can cause birds to be alarmed or suspect trouble. So, keep the welcoming committee talking loud and clear to finish birds quickly.

We’ve had some incredible days on specks when targeting snow geese. With a big spread of white decoys and an electronic caller filling the air with happy and content goose noises the specks are just as apt to join the party as any white goose. Make sure to check the regulations on using electronic calls, as some jurisdictions have restrictions on decoys used. That is, only white decoys can be used when running an e-caller.

Over the years, I’ve noticed a pattern with speckle-bellied geese. They are always hungry and more excited to get out to feed in the morning. It isn’t unusual to have birds show up well before legal light. On the magical mornings, a group of hunters can shoot limits before the sun clears the horizon. However, the problem with hunting mornings is the birds come out in big bunches. We’ve spotted fields with thousands of specks and tried to shoot them in the morning. The first flock usually gets hit hard by the guns, but with birds staggered across the sky all the way back to the staging wetland, it often brings an end to the hunt. The rest of the specks head for a new field, and everything else follows.

September is usually a warm month with pleasant daytime temperatures and geese loafing on a wetland during the day stay content and happy into the evening. They are much more staged coming out to feed in the evening, making it easier to decoy several flocks without alarming everything in the sky or on the day roost they’ll be coming off. If you’re getting frustrated by specks, target them in the evenings and see if your success rates don’t go up.

Specks migrate when they want to, and not necessarily based on environmental conditions, which can make them extremely frustrating to hunt. Last fall we watched a field with over 6,000 specks feeding for days. We set up on the third morning only to find most them had migrated out the night before. The weather hadn’t changed, there was still plenty of feed around, and the roost sites were anything but crowded. That didn’t change the fact the birds got the urge to move on, and that’s what they did.

When you spot a speck shoot, make plans to hunt it as soon as possible. Specklebellies can get flighty or change food preferences so get after them when they are still excited to be in a specific field.

We are often treated with late-October specks, but there are usually just a couple flocks left in any specific area. Every year is different, and if mild weather extends through the fall, some specks will hang around.

The one thing I’ve learned over the years is that you need some specialized equipment to score regularly on these wary arctic birds. Specklebelly decoys and calls are a must to target these birds with consistent success. It also helps to have hunting partners with the same passions you do. September will always be speck month for me, and with the best success rates, there’s no better time to be in the field.