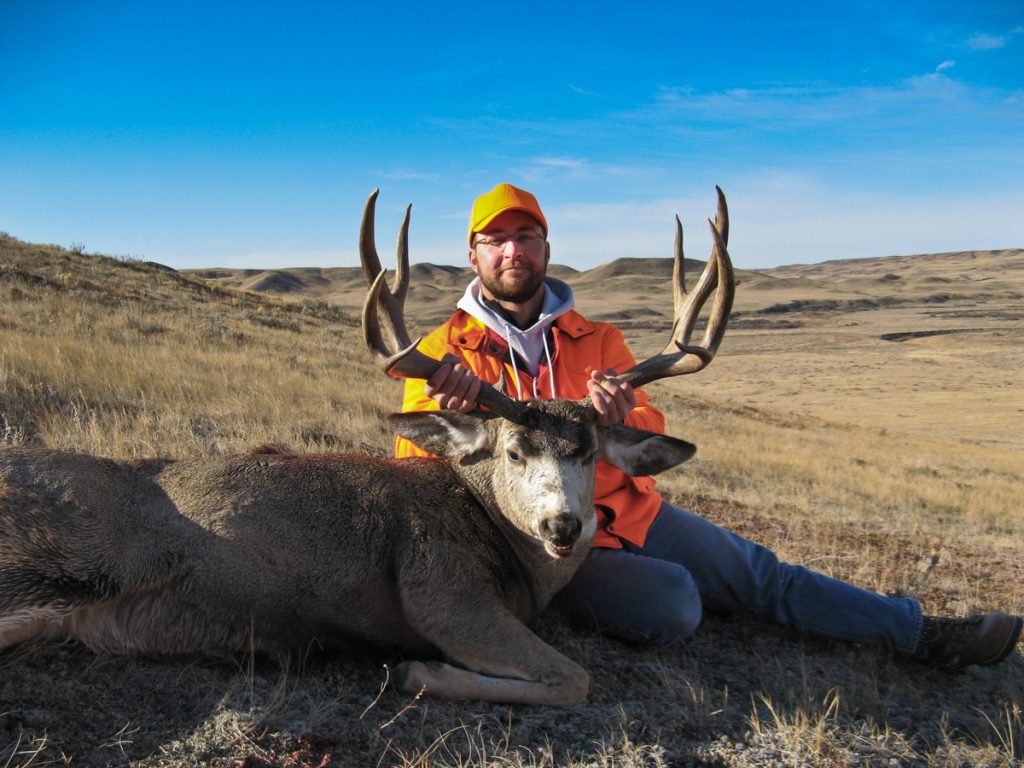 Steady-Up: A Primer on Field Marksmanship and Shooting Rests

Cresting the ridge, I spotted a group of mule deer bucks on the far side of a big coulee. A surge of adrenaline pulsed through my veins. Buck fever had set in! My heart pounded, and my hands shook. I tried in vain to steady my rifle for a shot while the band of brothers trotted up the draw and out of sight. I hurried along the ridge, hoping for another look and solid shooting rest. I soon caught up with the bucks. This time I was poised and ready, lying down peering over the crest, rifle steady on my bipod. A solid rest and the prone position made all the difference; I took the shot, and the buck stumbled forward and toppled.

Accurate field shooting comes from the combination of marksmanship and, particularly for longer shots, a solid support. Hunting adds its challenges like excitement, wind, and the gamut of weather mother nature throws at us. Today we’ll explore the skills and gear that improves success on the hunt.

There are four ways to hold a rifle while taking a shot. Each position has pros, cons, and scenarios where they work best.

The standing position is the least stable; however, it does allow the extra height needed for shooting over obstructions. Target shooters know this position well and, using specialized jackets and techniques, master it for precision shooting. Some hunters reliably make off-hand shots to 200 yards or more, but for most of us, this position is best for snap shots at close range. Shooting sticks improve stability and increase a hunter’s effective range while standing.

By dropping to a knee, a hunter improves stability a little. An advantage of this position is that the supporting hand is braced on the knee, bone-on-bone, which dampens some up-down rifle movement. Kneeling allows shots from cover that’s too high for sitting or prone. And it is a relatively quick position to adopt.

Shooting from the sitting position is useful to practice. Sitting shots include blind or tree stand chair shooting or with your butt on the ground. I use the sitting position in the backcountry when shooting downhill in steep terrain. This position is comfortable and more stable than kneeling. It allows me to adjust the shooting height simply by changing my knee position. However, it’s not practical in some terrain and habitats. 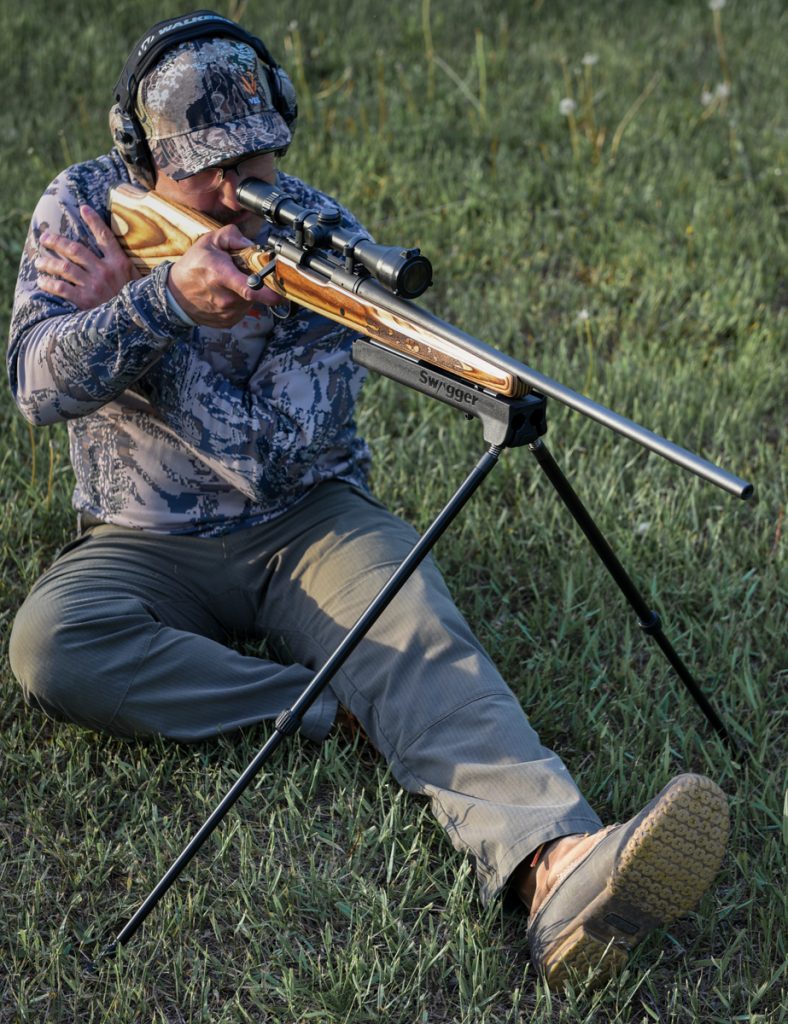 Prone shooting is the most stable. It minimizes rifle movement and is the preferred position for extra-long shots. Shooting rests like bipods add the most stability in this position, but it’s surprisingly stable, supported with arms only. 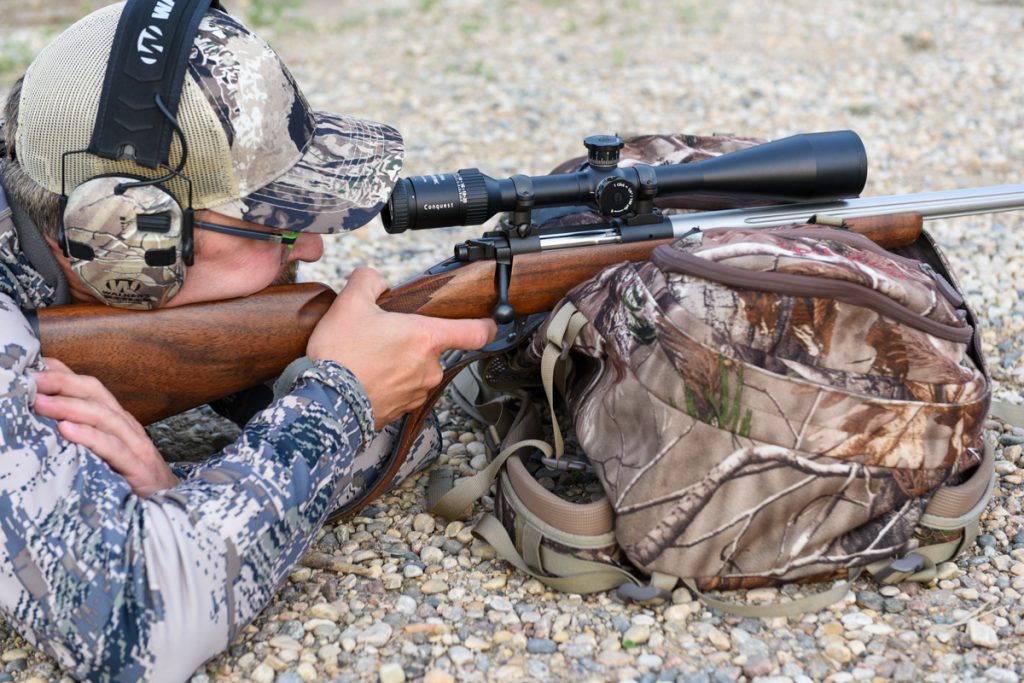 Hunters come in all shapes and sizes. Some of these positions may not be comfortable for certain people and quite comfortable for others. With each trip around the sun, a hunter may find shooting from the prone or sitting an increasingly arduous task. Understanding and practicing different shooting positions at the range builds confidence in the field.

The fundamentals for a good shoot start with some basic principles. It’s also important to note that following these rules is crucial as the distance to the target increases.

The marksmanship principles take practice to perfect. However, one of the easiest ways to improve shooting accuracy is using a solid shooting support. A shooting rest or support can be anything from a tree stump to a high-tech carbon fiber tripod. 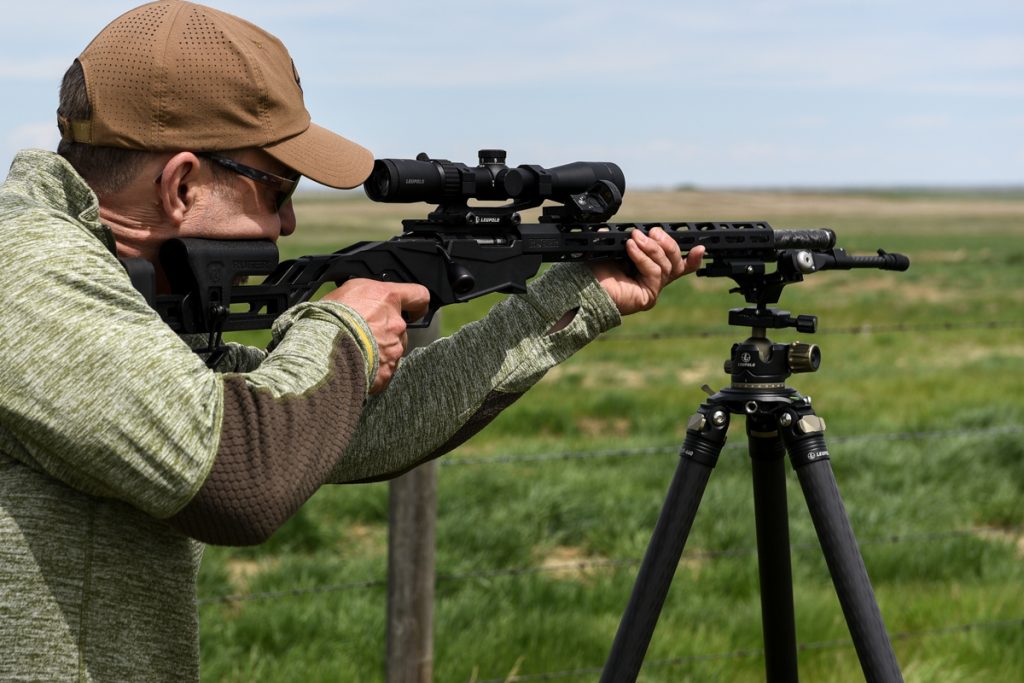 All supports have one thing in common; they reduce the rifle movement. It tips the odds in favor of a solid first-round hit. For hunters on the move, weight is often a consideration, so shooting sticks and small bipods, especially those made of lightweight materials, work well. A backpack loaded with gear becomes an expedient field rest, something I’ve used on many hunts.

A rifle sling is an excellent arm brace in standing and prone positions. I recommend pre-adjusting its length for proper tensioning before heading afield! Slings have another quirk. Because they pull from the supporting arm side, they torque the stock, possibly changing the barrel harmonics and point of bullet impact. This phenomenon is most evident in flexible injection-molded stocks, so test at the range to see if sling shooting affects your rifle. 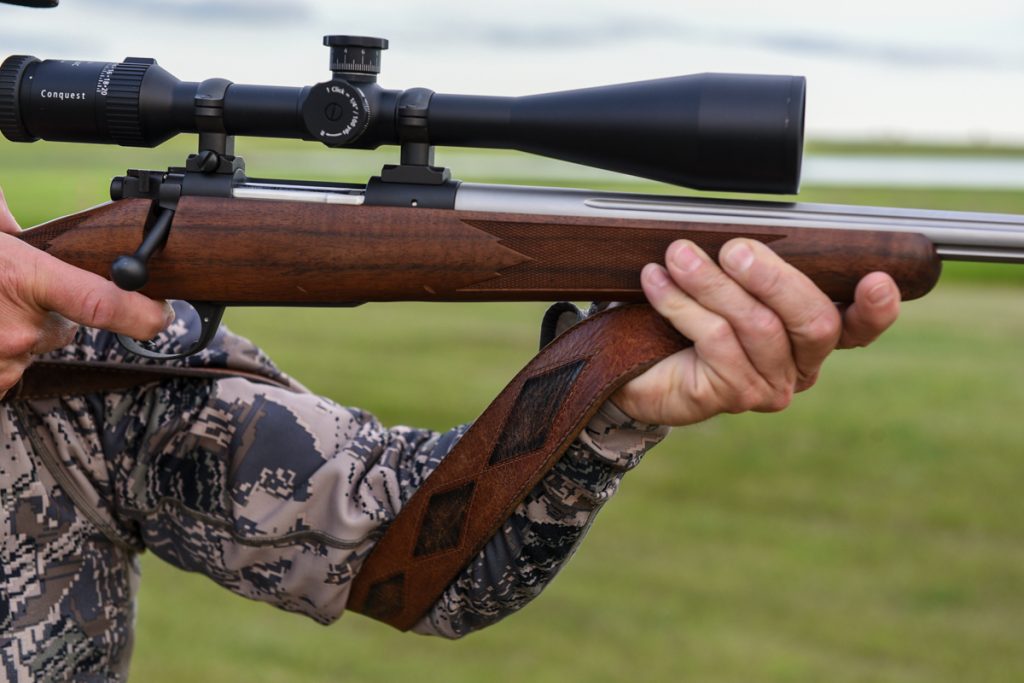 Monopods are the simplest support, and while lightweight, they still allow a lot of barrel movement. Some designs include feet at the bottom of the tripod, which dampens the side-to-side wobble.

Rifle bipods are probably the most versatile support, varying in height (for different shooting positions) and design. Bipods with tilt and pan allow shooters to follow an animal through the scope without needing to reposition. Bipods add extra weight to the forend, so some hunters choose quick-detach bipods for all-day carrying comfort. 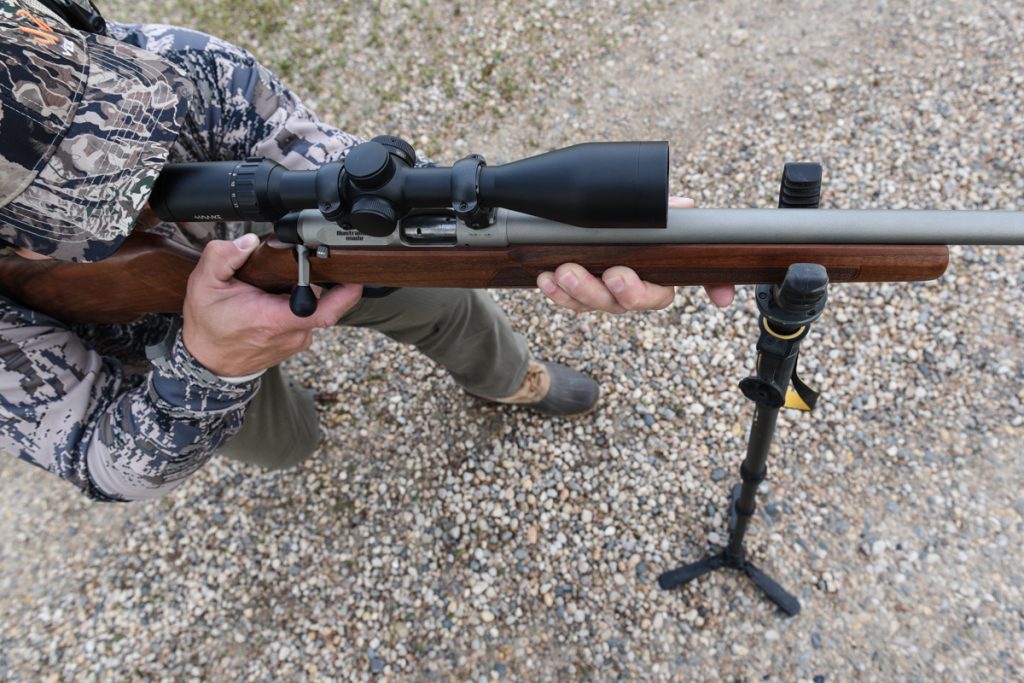 Most tripods are extremely stable, with high-end models now used in long-range shooting competitions. While some tripods are more than the average hunter needs, they provide great stability and build confidence for shooting. In a blind, tripods work awesome! Young and inexperienced shooters love tripods, too. Because hunting jitters can cause missed or poor shots, a shooting tripod may be the right tool for the job.

What is an ethical range for a shot? The answer combines many factors, but it’s safe to say the hunter’s shooting skills and gear play a large role. Determinator Targets makes a unique product called Effective Range Targets, which are super easy to use. A hunter aims at the bullseye on a game-animal-shaped target from a field position and shoots five shots. The score ring that contains all the shots, identifies your effective range; for some hunters and gear setups, that range may be 100 yards, for others, up to 300-yards, and for sharpshooters, 500-yards or more. The targets are an inexpensive and effective tool to measure your skills. Know your limits. 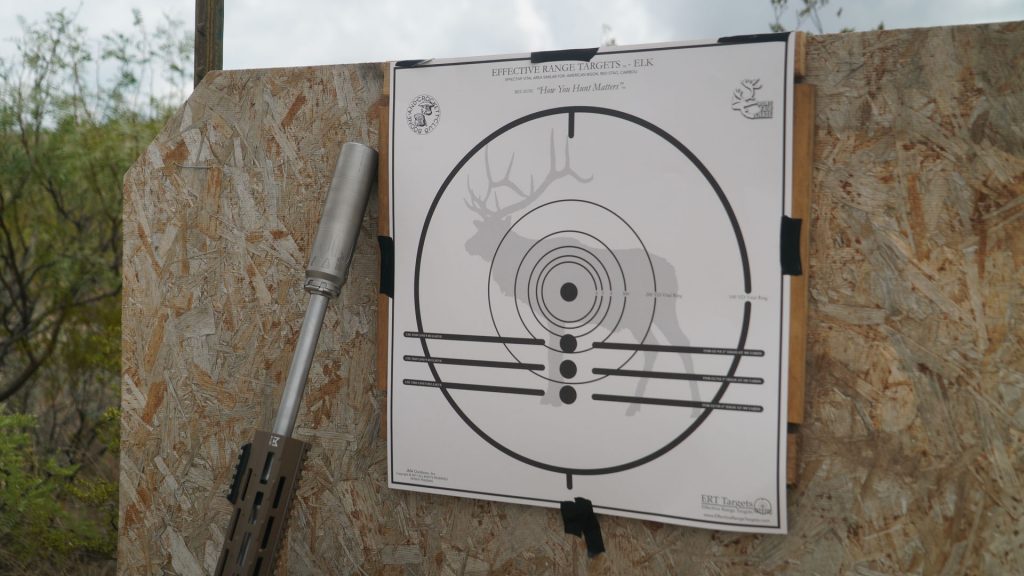 As hunters, we owe it to ourselves and the game we hunt to make clean, ethical shots. I practice shooting from various field positions and different rests. However, I practice freehand shooting the most. Shooting rests can become a crutch that impacts my overall abilities. However, when I use a rest after freehand shooting, it feels incredibly stable—like I can’t miss!

Carry the gear you need to succeed. After my first epic mule deer hunt, I’ll never hunt big game without a bipod or other shooting support in tow. 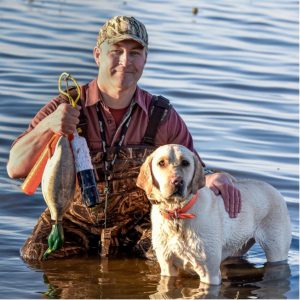 Lowell Strauss is an international award-winning writer, photographer, and avid outdoors adventurer. His love of hunting started with jump-shooting ducks and spot-and-stalk deer hunting in his home province of Saskatchewan. And he’s been chasing waterfowl, upland game birds and big game ever since. Strauss shares his passion for the outdoors by mentoring new hunters, instructing hunter and firearms safety courses and teaching wildness skills to the next generation. Each day, he trains with his faithful hunting partner, Bella, a yellow lab who is always ready for a hunt.
All Posts