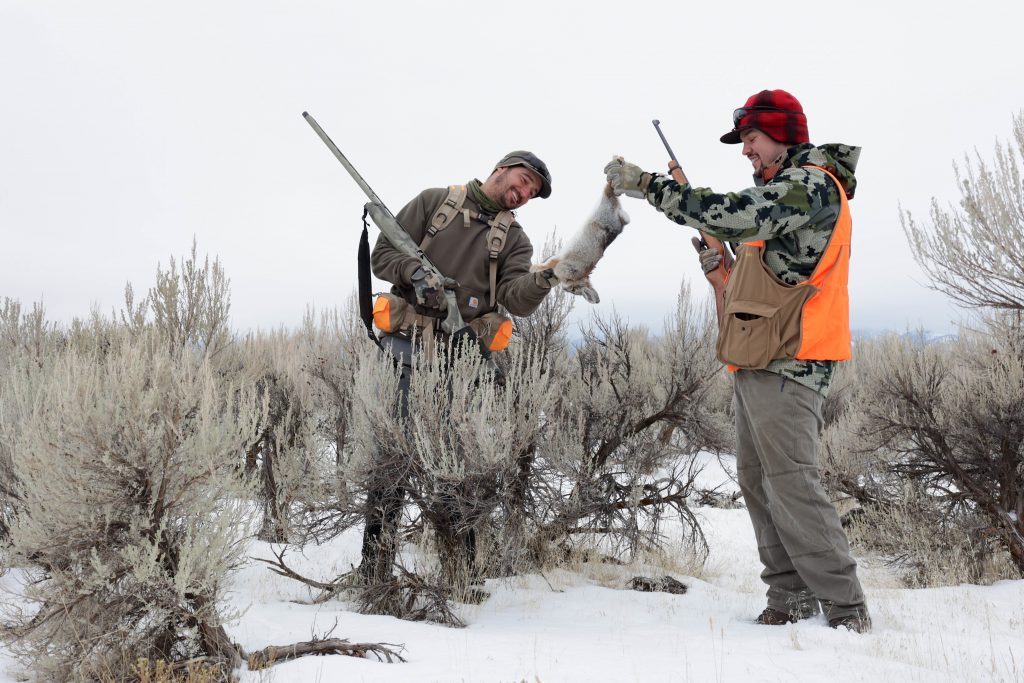 My brother and cousins and I were winter “big game” hunting many years ago. Each of us carried the most powerful rifles we owned — .22 rimfires. Our farmland rabbits were in trouble.

The rabbit obligingly stopped, gray and plump against the snow. I imagine it assumed its quick dash had carried it safely away from Bob and Karen, who were still-hunting the far end of our snowy woodlot. Kelly aimed and aimed, and I feared our quarry would hop away before he finally pulled the trigger. And then the bunny did hop. Straight up and over in a reflexive move signaling “dead rabbit” to any experienced cottontail hunter. 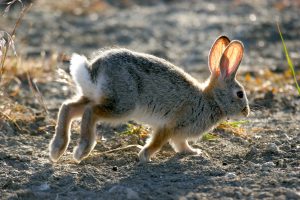 “Don’t move. More coming. Wait’ll they stop and take the one on the right. I’ll take the left.” Two gray runners squirted through the powdery snow along the edge of the woods, ducked back in no more than 15 yards in front of us, and sat obligingly. Kelly’s rifle cracked. My cottontail flinched but didn’t bolt, so I applied the final squeeze to my trigger. Two more trophy rabbits for the pot.

Obviously, my cousins and I were not truly hunting anything “big” except fun and adventure. To young hunters and even older novice hunters, pursuing cottontails is as exciting and fulfilling as hunting whitetails, elk or anything else. The objective is the same: search for game. Find that game. Get close enough to make a sure shot. Celebrate your success. And once you’ve eaten tender, delicately flavored cottontail, you understand why it’s a trophy.

My first few cottontail hunts are so far in the rearview mirror that I can’t clearly see them anymore, but I can remember the anticipation, excitement, and satisfaction of the whole program. Cleaning the rifle. Choosing just the right cartridges. Zeroing. Training to hit soup cans at 10, 30, 50, even 75 yards. And then, finally, slipping into the wilds, the weedy, brushy woods, the farm field edges. The haunts of unknown but anticipated beasts of all stripes. Sure, rabbits were the prey, but a skunk, raccoon, red fox, or coyote — maybe even a bobcat! — might pop up anywhere.

And we were licensed and armed to take them.

To a kid, a .22 rimfire is akin to a magnum pellet gun on steroids. A real gun. A firearm, not just an air rifle. The idea that we were being trusted enough to handle such potent “long-range” tools gave us an uncommon pride and bond with the adult hunters who were inducting us into their world. Our goal was not just to handle ourselves and rifles safely, but to behave, chip in when there was work to be done, and aim for precise, clean, one-shot kills.

Throughout this process, throughout all the golden autumns and muffled snowy winters, cottontail hunting never failed to fulfill its promise. The search for bunnies lured us ever deeper into the wide, wild world. Even though that world was often the remnants of failed farms and ranches abandoned a few decades before we were born, it was nonetheless new to us, empty and mysterious. Why, we might well have been the first hunters to prowl those old woodlots and crumbling buildings in twenty years. Maybe even thirty, which was as long as forever! The fact that we routinely found cottontails in those same places confirmed our suspicions. We had found a pristine hunter’s paradise, a secret spot unknown to mere mortals. 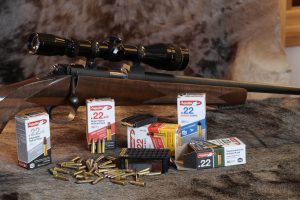 Despite the stacking of years, the passing of seasons filled with wilder adventures in true wilderness where elk, moose, sheep, muskox and grizzlies eclipsed cottontails, the lure of a rabbit hunts still tugs. The feeling is different now. Less mystery, less adventurous. But just as satisfying. Snowy thickets pocked by bunny tracks and sprinkled with dark pellets prove that Nature continues to provide, to fill her niches with riches. Sampling those riches with a well balanced 22 rimfire that stacks its bullets one tightly beside another, no recoil, no ear splitting boom…

It’s a stress-free hunt, too. There are no expensive licenses and tags to buy, no preference points to win, no trophy units to identify. The clock is not ticking on a short season. You don’t have to count tines, estimate spread, and beat all the other anxious hunters to the best of the best. It’s just rabbits, one as big as the next. None requiring a tag or even a drag. If you don’t find them today, try again tomorrow or next week. In most jurisdictions the season stretches for months, sometimes all year. There’s no need to slog out in the rain or endure a 30-mile-per-hour wind. Wait until conditions are prime. Take your time. Listen to the quiet echoes of the winter woods, the expanse of the prairies, the cloistered security of the forest. Enjoy the day.

Another delightful reality about cottontail hunting is that no one’s leasing up the best areas. You don’t have to beat every other hunter to the punch. Once the big game seasons are over, most landowners will give polite, responsible sportsmen permission to rabbit hunt.

Shotguns as well as rifles are used to bag bunnies in most places. The only downside to shotguns become obvious when you’re picking pellets and hair driven into the meat. But if you wish to get your game, scatterguns are your best option in habitat where cottontails are usually spotted only after they’ve bolted. Rifles are best where rabbits can be seen before they run.

A traditional tactic is to run rabbits with beagles. The dogs sniff them out, jump then, then chase them in a big loop that generally brings them round to the original jump site. Wait there with a shotgun and you often get a shot.

Another shotgunner’s tactic is to flush and shoot much as you do for pheasants. Two or more hunters walk abreast in good cottontail habitat, shotgunning bunnies that jump and run. Just be sure where your compatriots are and only shoot rabbits running to the front. 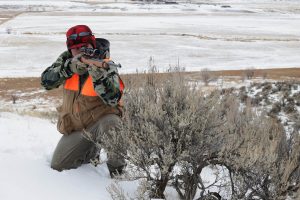 Still-hunting with a rifle is great training for deer hunters. While tiptoeing carefully through cottontail woods, scan carefully for your quarry. Look for sunlight reflecting from an eye or glowing pink through ears. At dusk and dawn you’ll often discover rabbits moving out to feed, but during most daylight hours they crouch in their forms or under some type of cover, so they’re difficult to spot. A binocular is a big help. Use one to study potential hiding places as close as 10 yards. Sometimes you see just a small patch of bunny through the cover.

The easiest rifle hunting comes on a sunny morning after a big snowstorm. With most of the world white, gray cottontails stand out like exclamation points on a page! They like to sit at the edge of escape cover to soak up the sun. All you have to do is scan the edges of woods, thickets, brush piles, rock piles, and manmade junk such as farm implements, barrels, pipes, post piles — anything that provides hiding places for rabbits. Aim at the base of the ears and you’ll collect a perfect carcass.

A deer, elk, or moose rifle can be used to take rabbits. They are seriously overpowered, but if you place shots in the head… Ideally you should build reduced loads using the lightest bullets in your caliber. The Speer Handloading manuals list recipes for many of these. For example, they describe a .308 Winchester load that drives a 100-grain plinking bullet just 1,569 fps. That’s only about 300 fps faster than a typical high-velocity .22 Long Rifle. The bullet, however, is 60 grains heavier. It carries a lot more energy, so stick to those head shots. Reduced loads have minimum recoil. They let you hunt with and become intimately familiar with a rifle that might otherwise sit in the safe 11 months of each year. And shooting your own custom-built ammunition adds another element of satisfaction to an already satisfying hunt. Hop to it. 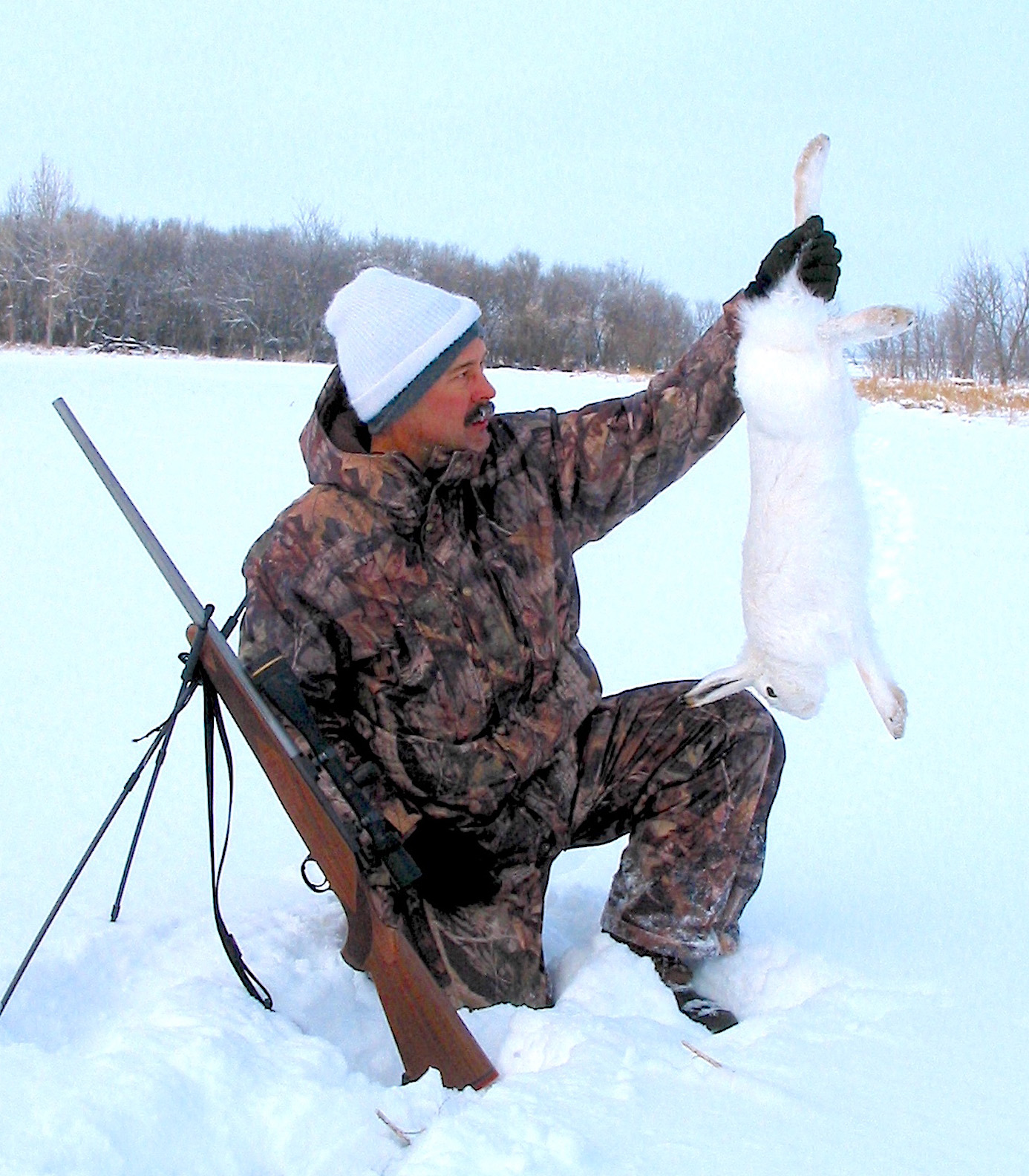 Ron Spomer grew up a Great Plains country bumpkin with a love for the hunt and writing about all things outdoors. He's hunted around the world for everything big and small but still enjoys a good old fashioned jackrabbit hunt on the Great Plains of his youth. He and his wife live off the grid on a small western ranch.
All Posts