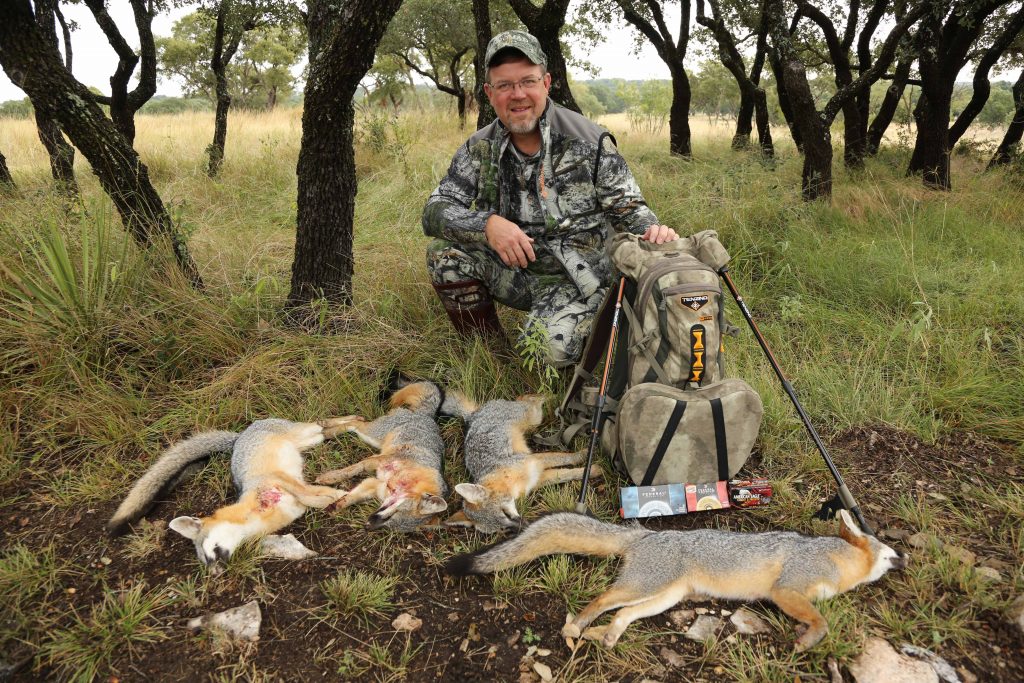 Some hunting buddies thought that heading to Texas in the middle of the deer rut was crazy. However, it meant zero competition in the camp when it came to predator hunting. The talk around the dinner table focused on deer, antlers, and the rutting behavior hunters observed from their blinds. My longtime hunting buddy, Mario Friendy, just smiled silently, knowing the next couple of days would be a predator hunter’s dream.

I had never hunted gray fox and was looking forward to any encounter. Our first set was early afternoon, shortly after arriving in camp. Mario ran our Flextone FLX 500 e-caller upwind about 80 yards and tiptoed back to where we would set up and watch. We started with a juvenile jackrabbit in distress. The sounds are hideous, and the call had been running five minutes when Mario elbowed me and said, “there’s a fox at the caller.”

Having never hunted gray fox, or their habitat, I didn’t have the sight image required to pick up my quarry as fast as needed.  By the time I got the target in my crosshair, it had jumped over our caller and was gone. The brief encounter changed how I would play the game, and I knew the next fox to show up would be in big trouble.

Little did I know that the second fox would show up a minute later. My crosshair locked on the fox’s chest in a split second, and I squeezed the trigger. The “whack” of my bullet finding its mark was unmistakable.

Getting the first fur on the ground seemed to take the pressure off, and we headed down the road to squeeze in another set before sunset. The wind had died off, and you could hear birds singing from hundreds of yards away. We set up our caller, and it took less than a minute to have a fox come running into our distress calls of a jackrabbit in big trouble. Mario wasted no time anchoring the big gray the second it put on the brakes. 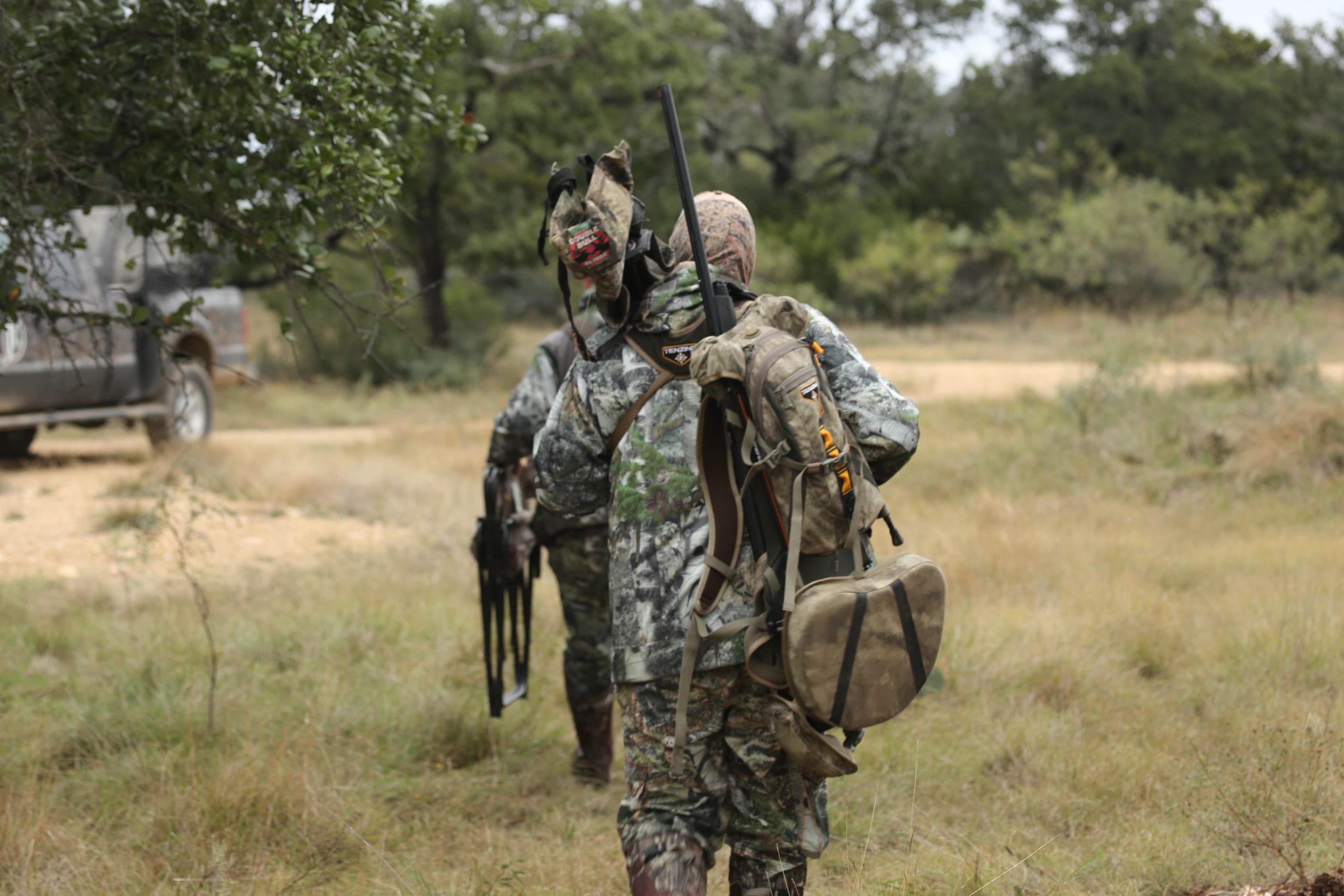 We were off to a great start and moved farther down the road to try our luck one last time. We set up on a fence line adjacent to a long meadow. The tall grass reduced our ability to see into the distance, but we knew the foxes would come close if active. Mario set up about 60 yards to my right so that we could watch a greater area. The caller ran for about five minutes before Mario switched up sounds from a jackrabbit to a cottontail. A mere 30 seconds later, a fox ducked through the fence and stopped on the two-track. My rifle barked, and the fox backflipped into the long grass.

To say our first afternoon was successful would be an understatement. Every set we made, foxes died. We headed back to camp for dinner, with plans to sneak back out for a hunt after the sun went down. I had a Cyclops Varmint Light mounted on our scope and was itching to try it.

It was my first-ever night hunt, and I quickly saw how it could be incredibly addicting. The glow of green eyes running at you through dark space is an adrenaline rush. Locking a crosshair onto the right part of an animal’s body is challenging when deciphering things with a hunting light. The first fox we called up came running through the tangle of thick brush. It stopped at about 80 yards, looked over its surroundings, and was knocked to the ground with a well-placed bullet. I knew I would not be getting much sleep on this trip.

The next morning, we drove 10 minutes from camp and set up on the edge of a large meadow, with the road at our backs. We set out the Flextone, and Mario hit the jackrabbit in distress to try and repeat our success from the previous day. Not long after, the movement behind Mario caught my eye, and I could only hope he could sit still when the big gray wandered less than 10 feet in front of him. In his Mossy Oak Country, the fox came right past Mario and headed straight upwind towards the caller. Mario played things perfectly, waiting for the fox to create a space from his rifle’s end before he anchored the big male. 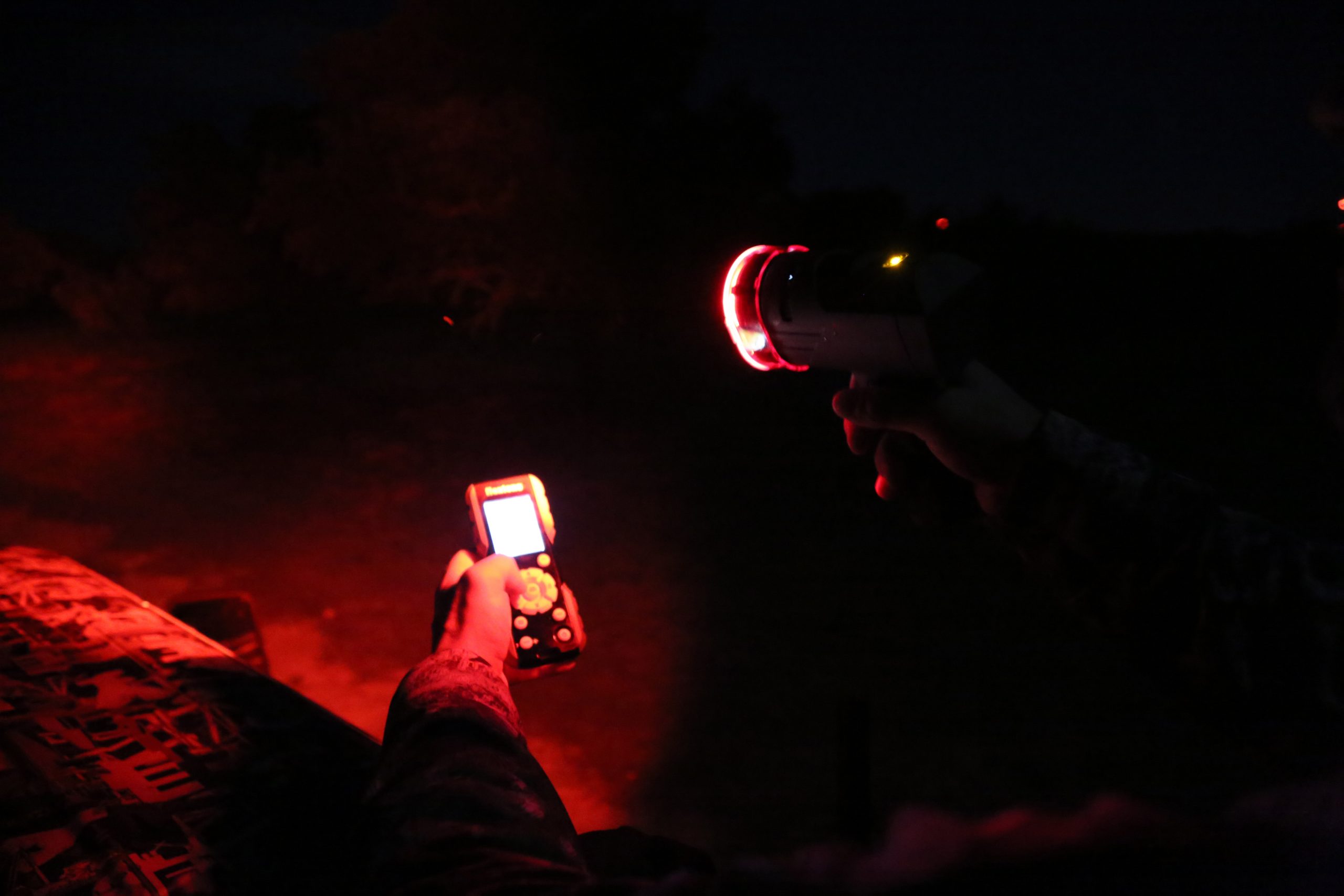 We had discussed trying to shoot multiple foxes from the same set. At the report of the rifle, Mario immediately changed the calling sequence to a cottontail screech. After about 10 minutes, I was hand signaling Mario to wrap it up, so we could head to a new spot. I could see my hunting partner pick up the e-caller control when a fox came sneaking through the brush beside me. I tracked it in my Bushnell scope, hoping Mario would not stand up. The fox stopped, and I gently squeezed the trigger giving Mario a mild heart attack, but we had two foxes on our first set to start day two.

We only traveled five minutes down the road before setting up in a large L-shaped meadow. We were jacked up from our early success and put the caller out 60 yards in front of us and let the screeching begin. I was looking in the opposite direction when a fox showed up at the caller, and Mario crushed it on the first shot. We left the caller squealing and turned the volume up slightly. A second fox showed up as though on cue, and Mario quickly added more fur to the pile. We tried not to giggle out loud and left the caller running, and to our amazement, two more foxes showed up on the treeline. I tracked the closest one in my scope, and when it came to a stop, I added the fox required for our tripleheader. The action was hot, but two more foxes ran through our sight window and did not provide an opportunity. Just one hour into our hunt and we had five foxes in the truck.

We shot a double and a single on our next two sets before calling it a morning.

There was lots of discussion about the full moon, warm temperatures, and the weird hours most of the predators were being shot. Driving to the afternoon set location, there was plenty of discussion over what calls to use. The jackrabbit in distress was the clear favorite, followed closely by the cottontail and then several birds. Hunting the brush country of Texas, there were plenty of rabbits and birds to imitate under distress, and mixing it up was often the key to success. It appeared some foxes would sneak close and watch, and when the distress calls changed, they came racing in.

We shot more foxes in the afternoon, but the action was not as crazy as in the morning.

Our time in the field had gone fast, and before we knew it, we were on our final night hunt. We set up on a large meadow and put the FLX 500 back to work. My Cyclops Revo spotlight with 1100 lumens picked up movement across the meadow. As I tracked the glowing yellow eyes in my scope, I waited for it to stop moving. At close to 150 yards, I put the first fox of the night down, and that’s when things got crazy. I was shooting a Savage 110 Predator rifle in .222 and had it dialed in perfectly. A minute later, Mario shot a fox off the back of the truck with a shotgun. At the report of the second gun, one of the male foxes got severely annoyed. 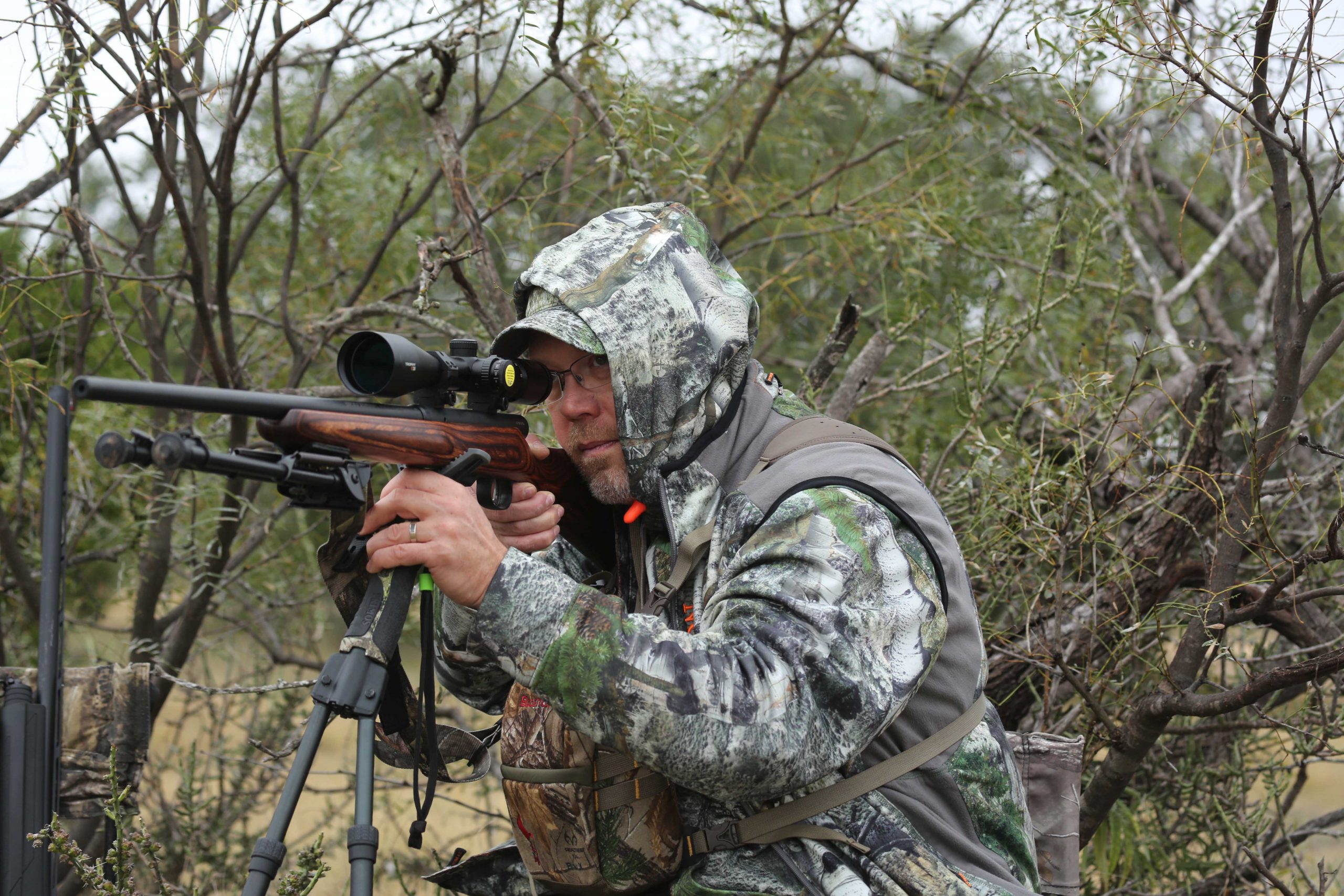 The big male gray barked and howled at us, making noises that sounded evil and demonized. The bushy-tailed fox trotted out of the brush and headed across the meadow in front of us, bemoaning our presence the entire way. I honestly think he was coming out to challenge us. Following the slender outline darting through brush and rocks, I had trouble getting the crosshair locked on fur for the shot. It didn’t help that the truck kept moving with my hunting partner squirming in the back seat. I was bemoaning their movement, like a parent with a restless kid in church, but what I didn’t know was a fox had come in behind us, and Mario was trying to get on it but was waiting till I shot first. When my crosshair did settle on the fox, I squeezed the trigger and added the third fox of the set to the pile. Seconds later, the shotgun from the back roared, and Mario just started giggling as he had several foxes come and go as he politely waited for me. We had four foxes in one set and had a total of seven show up.

We squeezed in one more sequence before calling it a night. It had been one of the best predator hunts either of us had ever experienced. We had both shot well over a dozen foxes in two days, and the multiple-animal sets will remain embedded in our minds forever.

Using the ScoutLook Hunting app provided the major and minor wildlife movement times for the day. It was extremely accurate. We had struck it lucky with our first attempts and set up during one of the best time frames of the day. Fifteen minutes elapsing on the clock was the difference between seeing predators in a “major movement” and seeing none. To become a more successful predator hunter, try the ScoutLook Hunting app and pay attention to the moon phase and major and minor time movements for game. Enter your successes in log to quickly show you patterns that work. For more information, go to ScoutLookWeather.com. 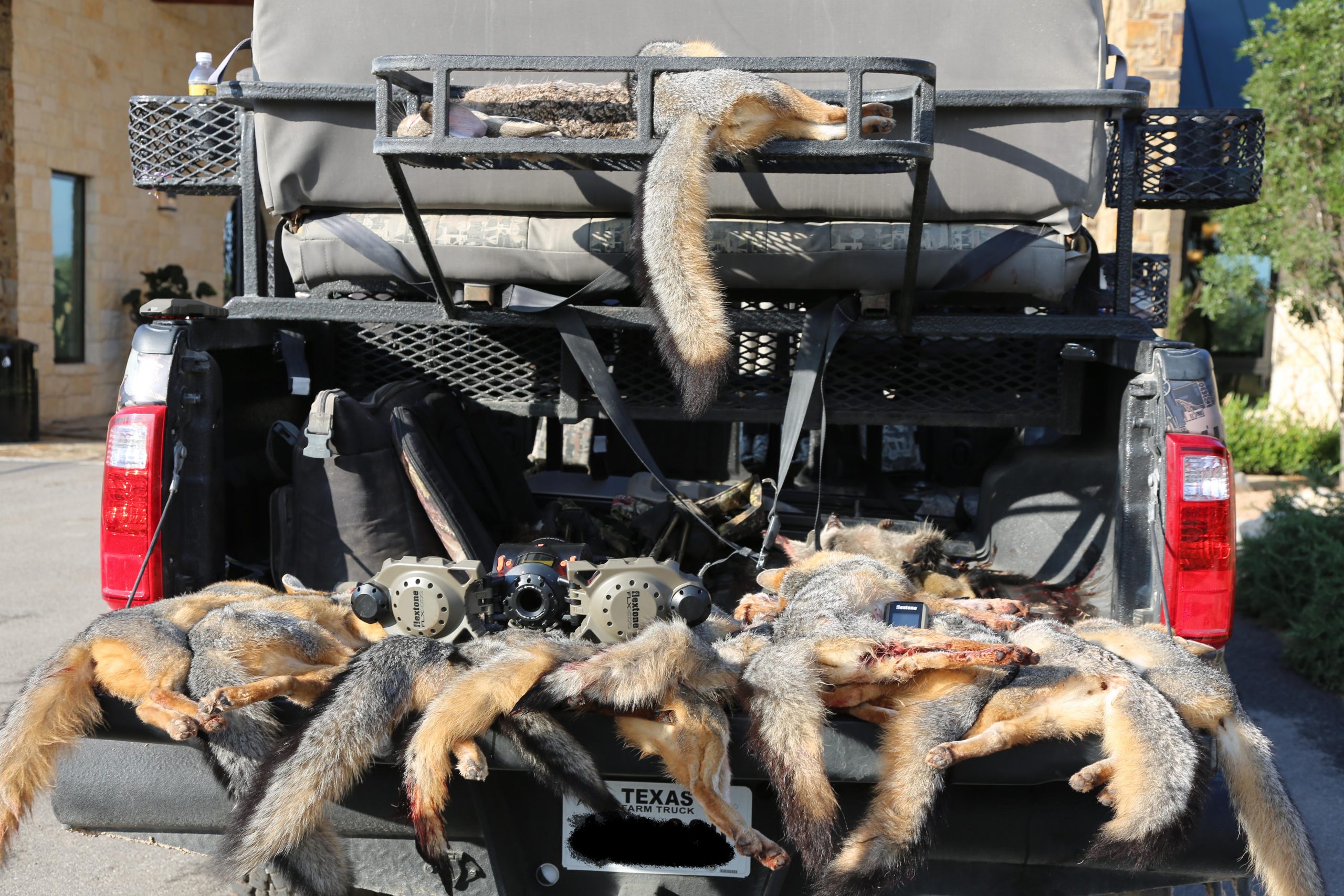