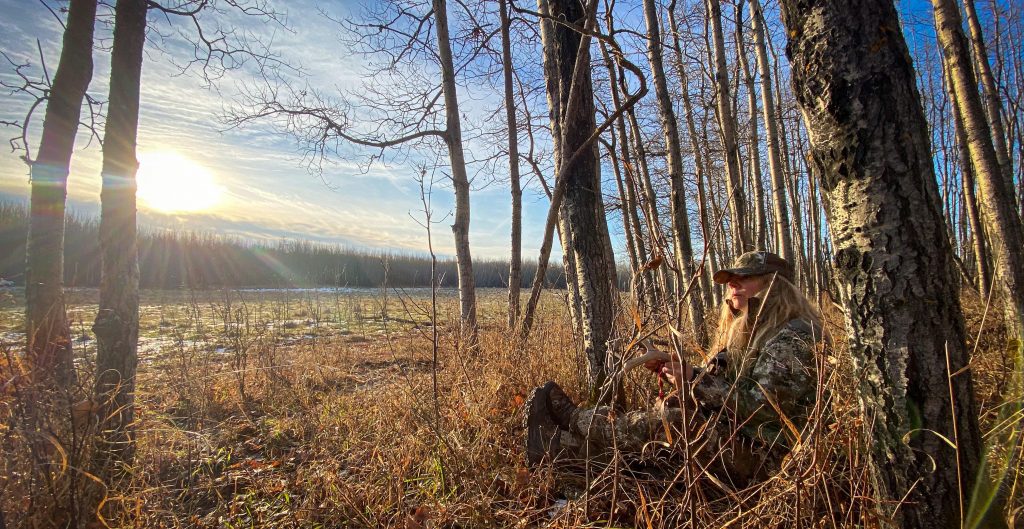 On the Trail of Alberta Boy: A Journey from Disappointment to Determination

My phone chirped, letting me know there was a new picture from my trail camera. I opened the app, and there he was, the healthy white-tailed buck I had named Alberta Boy.

My obsession with this buck started four years earlier when I first spotted him on my Spypoint trail cameras. He was young, but he had a good frame that supported his wide and tall antlers. Each year, I would witness him getting stronger and putting on more mass than the year before. However, he would never stay more than a couple of months before disappearing deep into the woods. There was something different about this buck, and I knew if he could make it through a few hunting seasons and our cold, harsh winters, he was going to be something special.

I hadn’t seen Alberta Boy since the previous hunting season. He had put on weight, and his five-by-five velvet-covered antlers were impressive, with his G2s (second antler) looking to be about nine inches long and the main beam stretching at least 20 inches. This was the year to focus all my efforts on this strapping white-tailed buck. 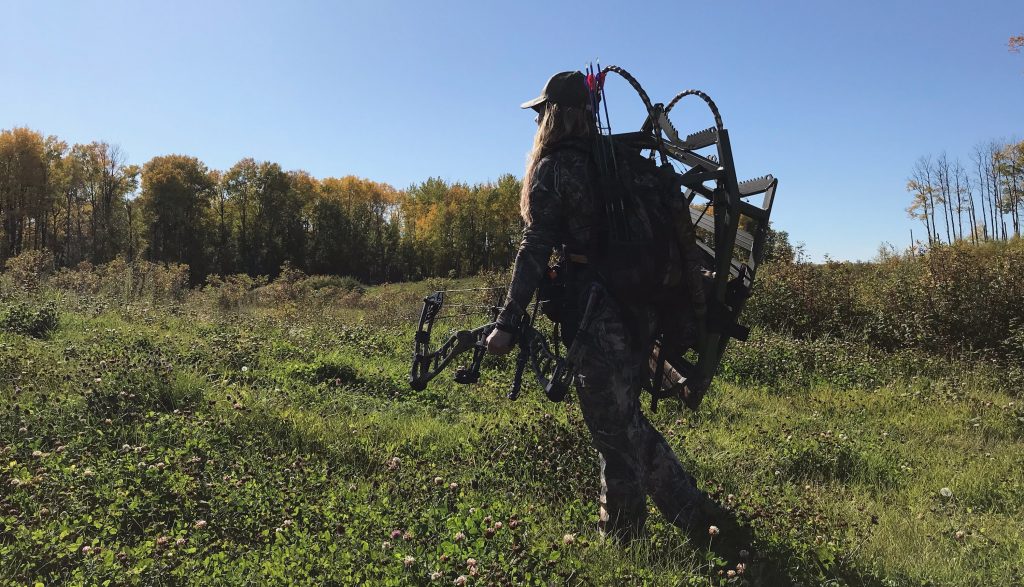 The thousand acres of hunting land is nestled in the boreal forest of Alberta, Canada, with a dominant canopy of aspen and spruce, combined with farmland. The white-tailed bucks travel freely among these acres, throughout which I have ten trail cameras positioned. I know I’ve correctly judged the quantity and placement of the cameras if I see different bucks showing up at independent locations. Although, Alberta Boy likes to travel, even the neighboring properties have seen him on their trail cameras — but only at night.

The data I gathered from my cameras showed the bucks travel pattern was mainly late afternoon, early evening. Based on this information, I set up three tree stands, two based on the prevailing wind pattern in the area and the other in case the wind changed. I was ready.

Archery season opened. I drove to my land, changed into my hunting clothing, and snapped on my full-body safety harness. With my Hoyt compound bow in my left hand, I started walking the one hour to my tree stand through the lush green grass, listening to the leaves rustling in the wind and taking in the smell of that autumn afternoon.

Thirty feet up, I climbed. My heart was pounding, mind racing, as I settled in and started glassing the area. The wind was blowing gently from the southeast, the songbirds singing their mating melodies, and I was content: staring off in the distance, allowing my mind to wander and feeling so thankful for the journey. 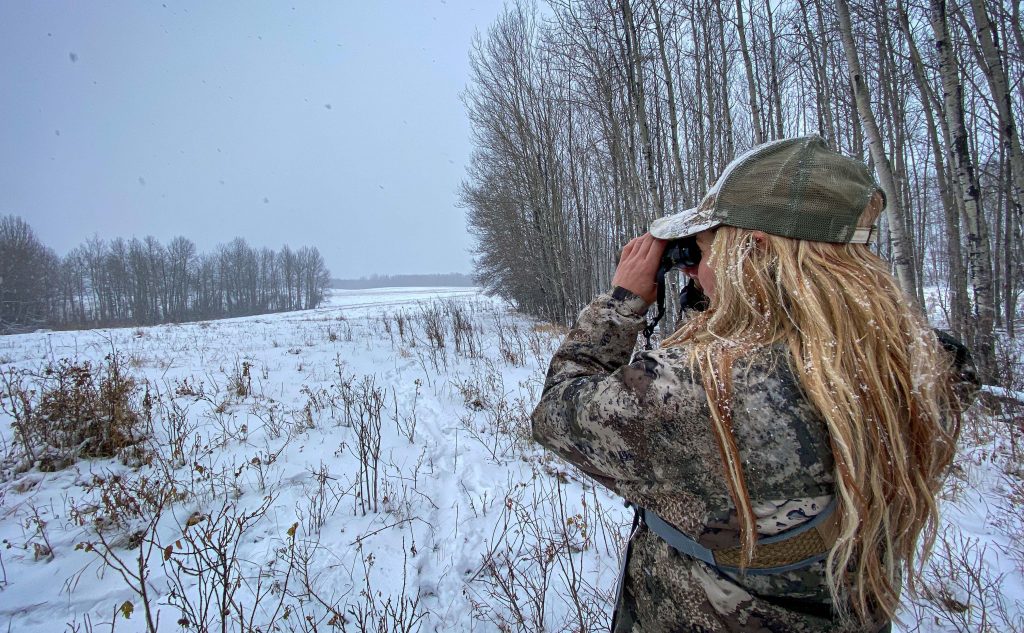 My eyes came back into focus; standing in front of me was the impressive buck, Alberta Boy. I could feel my heart hammering through my chest, and I am sure he could hear it. I took a moment to respect his stature, as he stood there broadside like a show horse. My legs started to shake and then my hands. Alberta Boy was more spectacular to see 16 yards in front of me than on any trail camera. I took a deep breath, seamlessly drew back my bow, then everything went silent. The world stopped, then flashed forward — my arrow on the ground and my bowstring off the cams.

Tears fell from my eyes. How? What? Why? Alberta Boy had no idea of his close call, and he sauntered off into the woods. I sat in the tree stand until dark trying to make sense of what happened. I had let myself down.

I spent the following week packing for my hunting trip to the mountains to pursue antlered moose and mule deer buck. However, Alberta Boy was not far from my thoughts, nor were the questions: would he show up again, and would I get another chance? The day I left for moose camp, I heard the chirp of my phone. I held my breath; Alberta Boy was back. Everything inside me wanted to head north for another chance, but I turned my truck south for my mountain hunts. 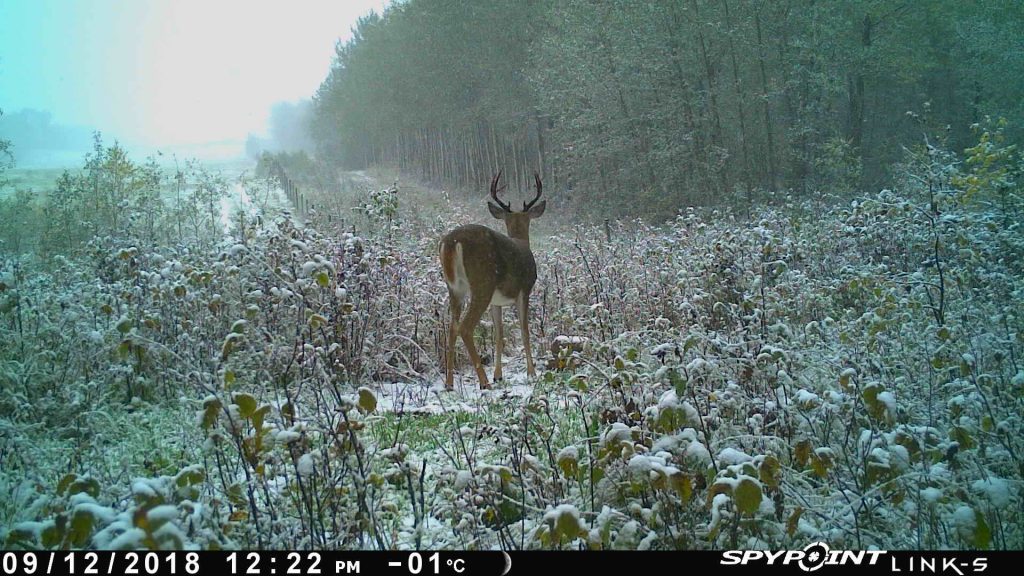 The days passed into November, and with every breath, I felt the crisp cool air in my lungs. The aspen trees’ colorful blanket of leaves had fallen to the ground, painting a vibrant collage that reminded me snow would soon arrive. I changed into my hunting gear, binoculars hanging around my neck, and spent the day moving trail cameras, exploring different bedding and feeding areas, watering holes, and game trails, all in search of Alberta Boy. His travel pattern had changed, and I needed to find where he was hiding.

Fifteen straight days of hunting with my bow through high winds, snow, rain and 5°F temperatures, and still no Alberta Boy. I took the next day off to get some work done around the yard. One of my adjacent neighbors to my hunting property stopped over for a visit. He was so excited to show me the buck he took with his rifle on this land.

He took his phone from his pocket and handed it to me. I stared at in disbelief. There was Alberta Boy. A flood of emotions came over me. How could he? Didn’t he understand my relationship with this buck? I mean — congratulations! As outdoorsmen and women, we are here to support each other — right? He must have seen the look on my face, combined with my silence, and asked if everything was okay. I quickly shook his hand and congratulated him on his success.

He shared the stats; Alberta Boy was a 10-point, 171-inch trophy buck with his G2s 10 and 11 inches and his main beams 22 and 23 inches. I wanted to be genuinely happy for my neighbor, but it was hard. I took the rest of the day to walk the land and express thanks for a four-year journey with a buck I called Alberta Boy.

A week later, the temperature had dropped to minus 10°F, and the ground was covered with a blanket of snow. I decided there was no reason for me to quit hunting, and, in fact, I wanted to finish the season strong.

With multiple layers, quality winter boots, and gloves, I slung my rifle over my shoulder and started walking the thousand acres, scanning for game trails, till I found what I wanted. By the size of the track and length of its stride, I decided I was going after this buck. An hour before dark, I saw him cross an open corridor. I made the decision to build a natural ground blind where I believed he would walk out the next day. With a knife and a small hatchet, I cut down willows and spruce bows, picked up dead fallen trees, and got to work. By 8 p.m. the ground blind was built, and I had a two-hour hike back to my truck. 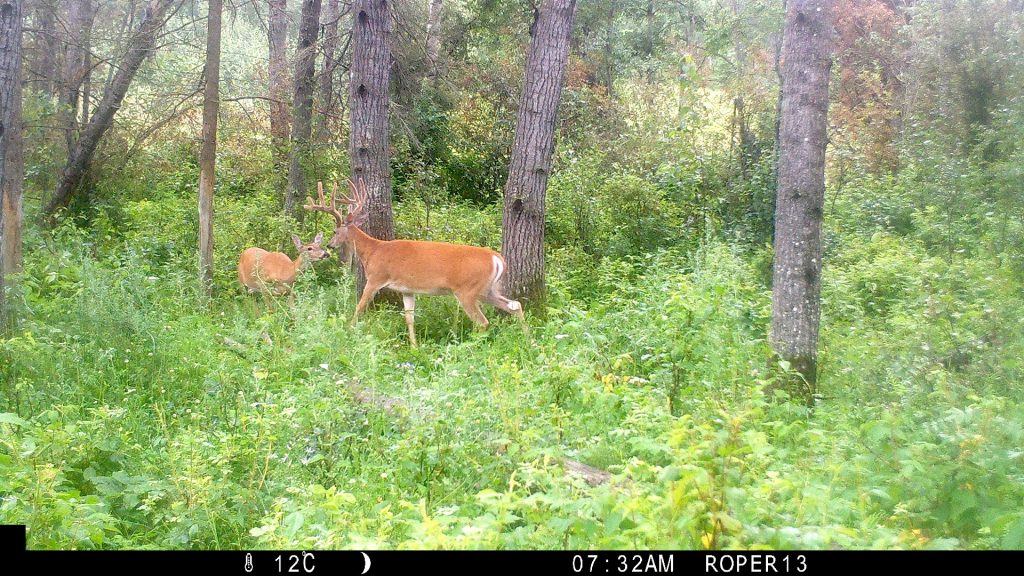 I woke the next morning, not sure I had slept, eager to settle into my blind before sunrise. It was so cold; the wind was whistling right through the tree branches, and I knew it was going to be a long day. As each hour passed, I had to remind myself why I built this ground blind and to enjoy the journey.

I was into my seventh hour of sitting and extremely cold, my feet and hands numb, but I was not quitting. I took out the last of the heat pads and inserted them in my gloves and boots, and told myself three more hours until legal dark. I heard a muffled crack to the north, and then it faded away. Glassing through the trees, I tried to pick up movement but couldn’t see any. As I lowered the binoculars, my peripheral vision tracked something to the south. Cautiously, one step then the other step, the buck moved forward, taking time to look around. I had already shouldered my gun with the crosshairs on the buck. I just needed him to take a couple more steps. My finger slid down to disengage the safety, the buck took two more steps, and I squeezed the trigger. He bolts into the south forest, and with a confident smile on my face, I knew this buck was down. 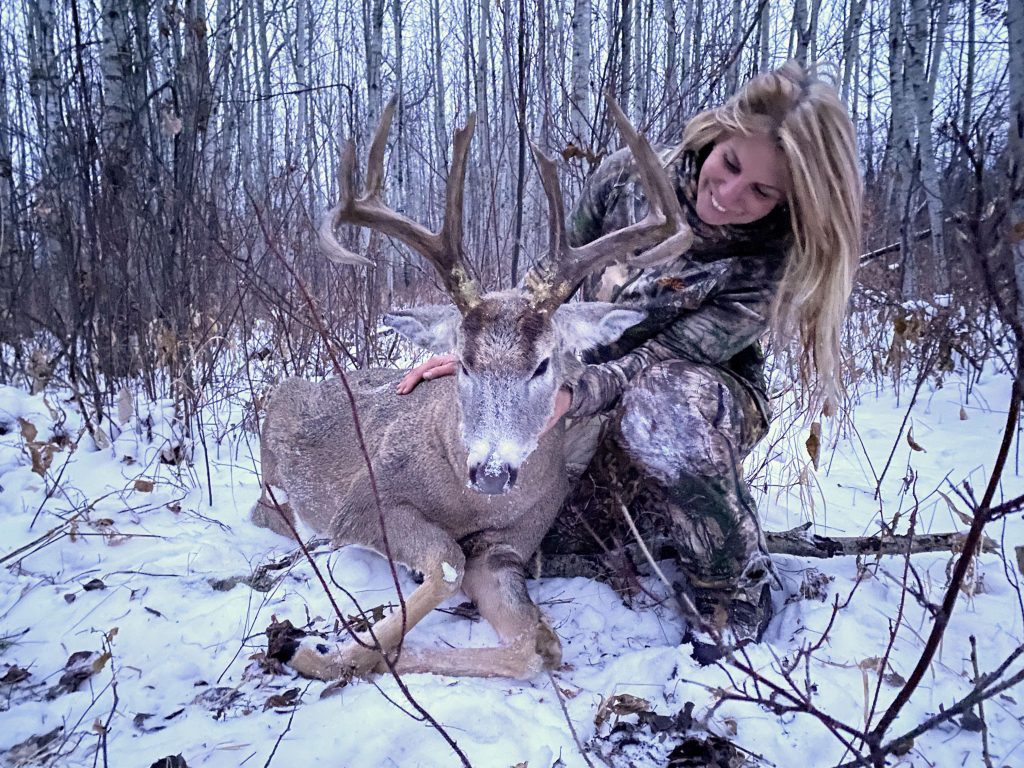 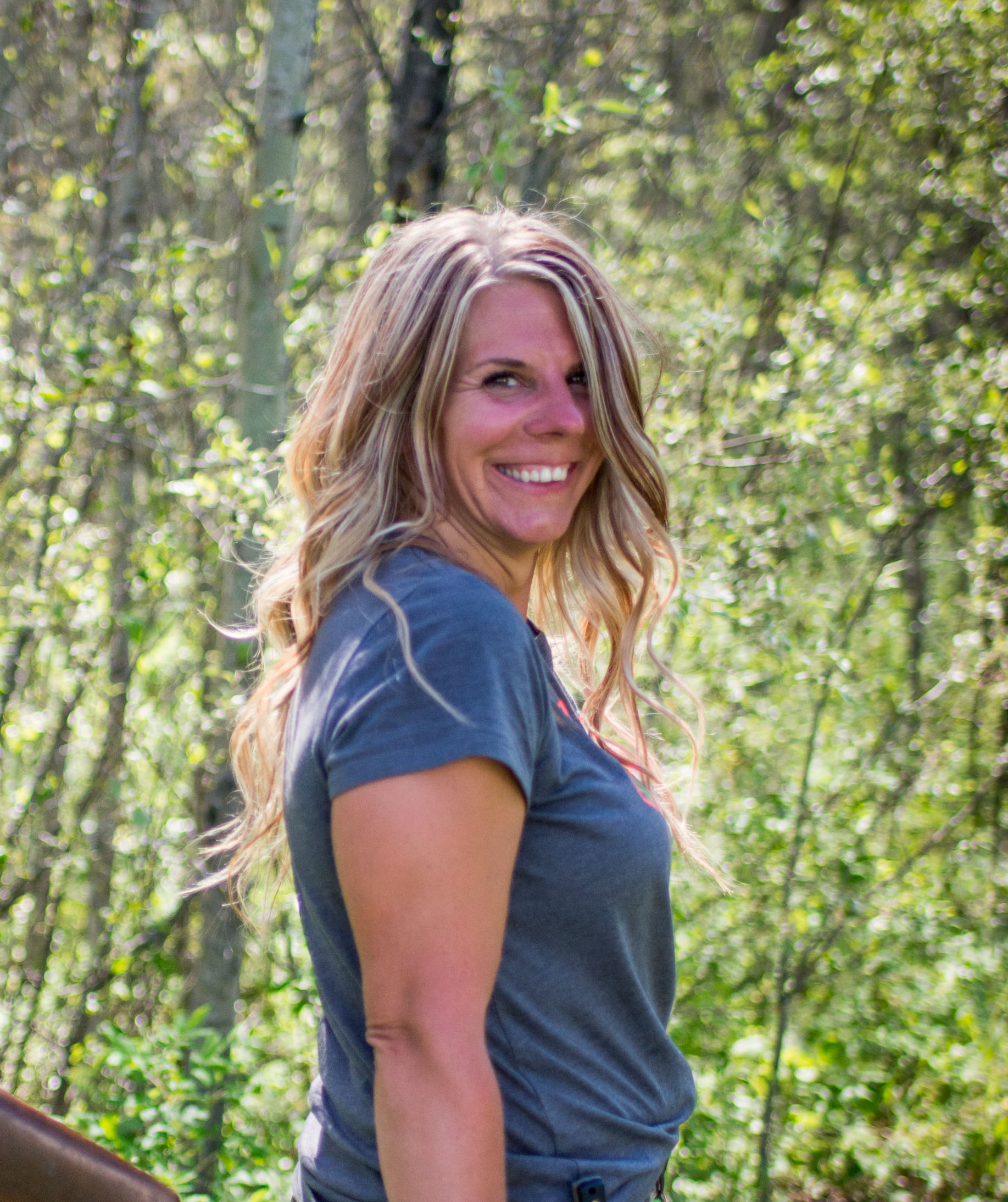