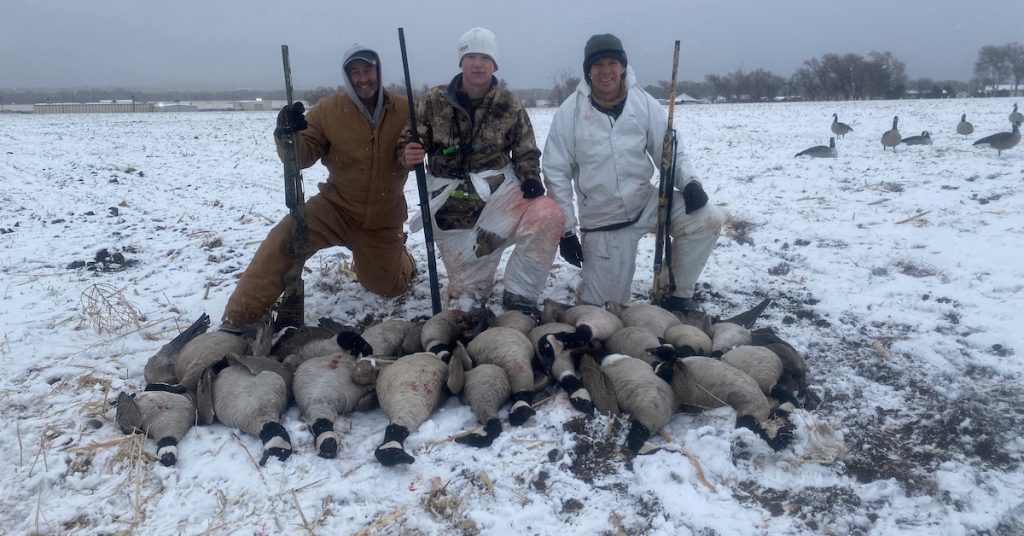 Goose hunting is hard work, and you owe it to yourself to tote a shotgun that will hunt as hard as you do to the field. Mix that shooter with a quality choke and our shotshell recommendations and you’ll bag more birds.

I tend to overthink things. I always have and likely, always will. Whether I’m studying maps looking for an off-the-beaten-path elk nirvana, or fine-tuning a piece of hunting gear, my brain is always going.

I’ve been on the hunt to find and customize the best goose gun for the past few years, and this year, all the pieces of the puzzle came together, and I can’t wait to share what I found.

I wanted a durable semi-automatic capable of quickly cycling 3- and 3-1/2-inch loads. The shooter needed to boast a robust build and be capable of handling Mother Nature’s worst moods. Then, of course, it needed to stand up to day-to-day abuse that comes with chasing migrating Canada geese.

I’m not vain, but I wanted the shotgun to boast a racy eye appeal, have a fiber-optic front bead, and be loaded with comfort and grip-enhancing features. A top-tier trigger was a must, as were come-with-the-shotgun extended choke tubes. I wanted the best and wasn’t going to settle for anything less.

Goose hunting, especially public-land goose hunting, is hard work. Each season, I spend thousands of dollars following geese from their roosts to their fields of choice. Most areas I hunt are Walk-In Access, which means they are private lands leased by the Division of Wildlife for hunting. Walk-In Access means no trucks or fancy-to-do trailers. We use Shappell Jet Sleds to drag dozens of decoys to the middle of large agricultural fields where other hunters are reluctant to go. 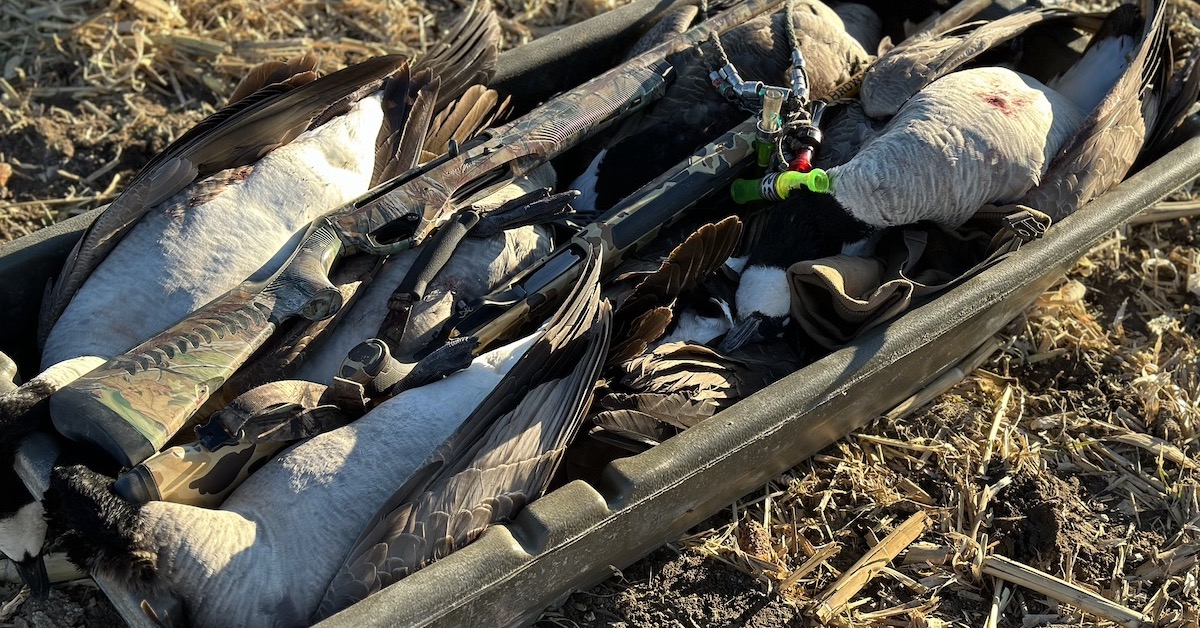 A great decoy sled is worth its weight in gold, and it serves a dual purpose when the hunt is over, and you have a pile of honkers to haul out.

Not to stray from the point of this article, but this is a killer tip for any public-land goose hunter. We love hunting large circle pivot or dryland fields and getting in the middle of those fields. Doing this gives approaching geese the entire field to let the air out and get down low, and during the late season, when birds have been pressured, they prefer large fields where they don’t have to swing over ditches, canals, and farm roads. You’ll kill more geese this way.

I’ve gone the budget shotgun, choke, and ammunition route for goose hunting, which is a terrible idea. You work too hard and put in too much time to have your goose wrecker fail during the moment of truth. I’ve used lesser semi-auto builds during my goose tenure, only to have them jam, freeze up in the cold weather, and abuse my shoulder. I’ve tried throngs of pump-action guns that work well for a bit, and then unless cleaned regularly, get dirt and junk in the slide ports, which makes pumping a spent round out and chambering a new one difficult. After putting in many hours scouting, setting decoys at 2 a.m., and getting on an X, I’d have trouble with my shotgun. Sound familiar? If so, make this change. 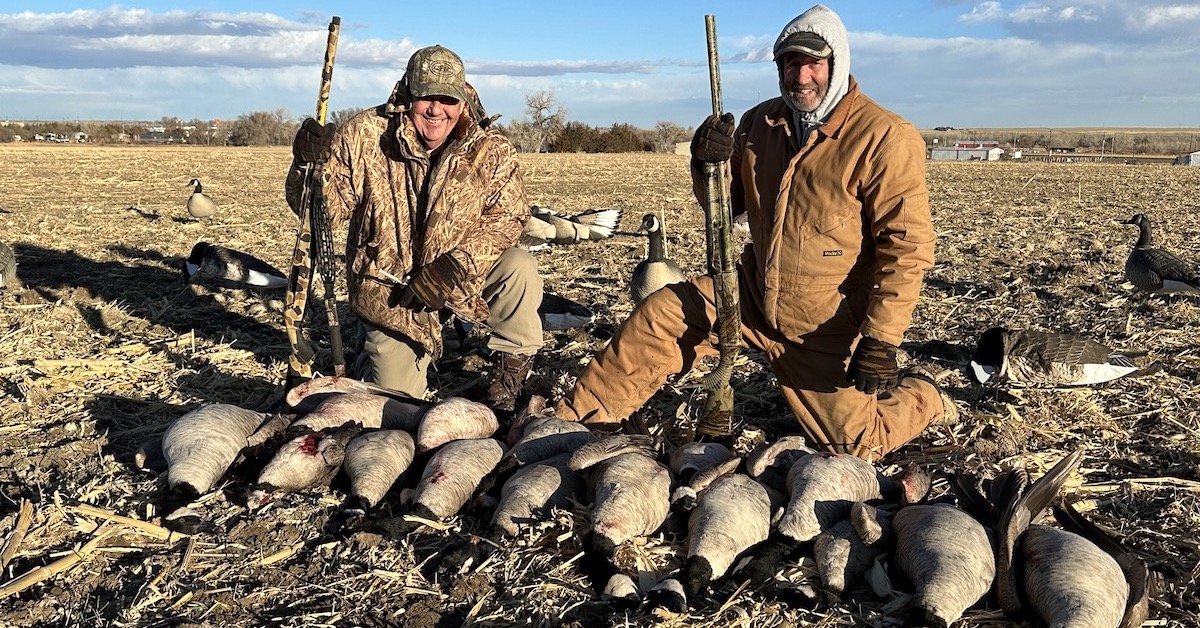 I’m not saying this is the best goose gun ever crafted — I haven’t tested every make and model out there — but I’ve been using Browning’s Maxus II for two full seasons, and it’s hands down the best goose killer I’ve ever used.

Available in barrel-length options of 26 and 28 inches, I opted for the 28-inch barrel to help extend my effective range. Overmolded rubber panels on the stock’s grip and forearm feel excellent in hand and reduce slippage in snow, sleet, and rain, which are common when chasing honkers. The Inflex II Recoil Pad is a cushion for the shoulder (more to come on this), especially for those wanting to shoot 3-1/2-inch shotshells. I also applaud the Maxus II’s SoftFlex cheekpiece. The design welds the cheek and promotes a level of comfort that will be appreciated by those that shoulder this innovative shotgun.

I’ve yet to experience a jam or loading issue with the Maxus II, and over two years, I have put over 1,200 goose loads — 3 and 3 1/2 inch — through it. Chalk the cycling brilliance up to Browning’s tried-and-true Power Drive Gas System, which promises lightning-fast operation and reduced recoil. Browning engineers have perfected the gas piston inside the Maxus II to be ultra-reliable in all conditions. The 20 percent longer stroke means the shotgun will kick out light 1-1/8-ounce payload shotshells as well as larger magnums.

Speed Load Plus is another must-mention Maxus II win. This patented feeding system puts the first shell loaded into the magazine directly into the chamber, and unloading is just as easy. On many auto-loading shotguns, unloading the magazine requires working the action back and forth to eject shells one at a time. With Speed Load Plus, you can empty your magazine without having to work the action over and over, and  you can reload the chamber quickly and repeatedly.

I spent a fair amount of greenbacks testing custom waterfowl chokes from the lesser shotguns I used. When you go with Browning’s Maxus II, you get a trio of chokes that pattern as good or better than any “custom” waterfowl chokes I’ve used. Branded the Invector-Plus choke tubes, goose goers that purchase the Maxus II get extended, non-ported tubes in Full, Modified, and Improved Cylinder. My goose go-to is the Invector-Plus Modified, and the tube is branded with an M on the gridded extended port. This gridded metal portion of the tube ensures an excellent grip and makes starting the threading process easy. I love the stainless-steel construction and black oxide finish; minimum gap geometry plus a high-resolution RMS finish reduces plastic build-up in the bore. When paired with a quality goose load, the modified choke produces excellent patterns, and I’ve tested it all the way out to 60 yards. More than once, and I confirmed this with a rangefinder, I’ve dropped giant Canada geese beyond 60 yards with 3-inch bismuth and tungsten loads. 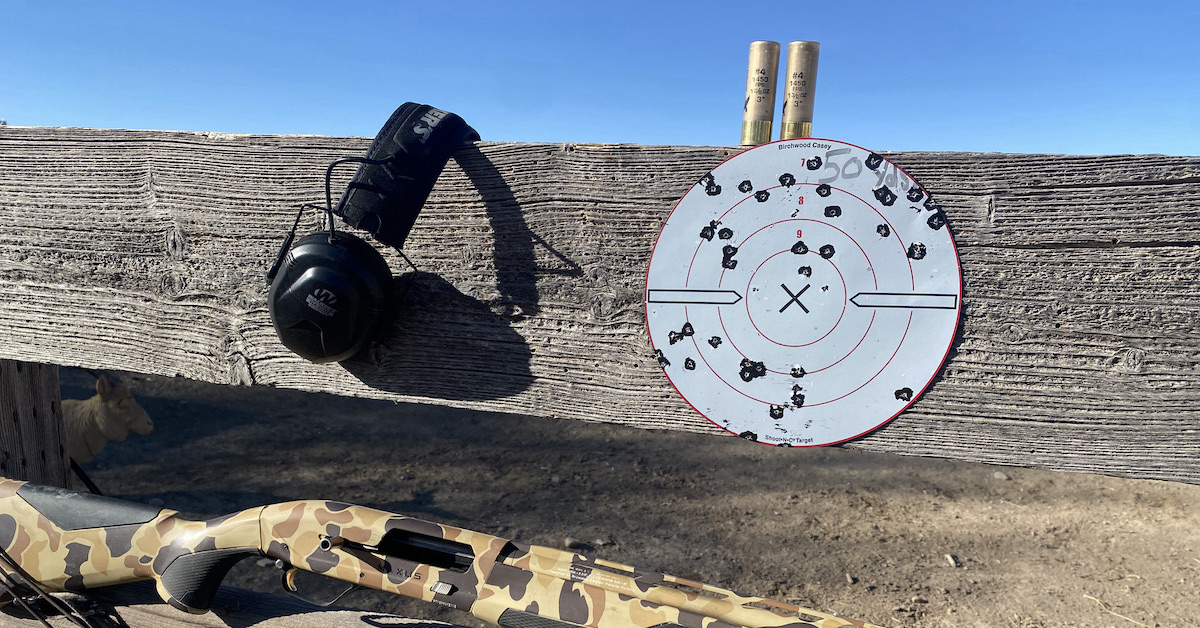 Browning’s Invector-Plus Choke Tubes are the best I’ve used, and I’ve patterned lots of shotshells over the years between 20 and 60 yards.

You can have the best goose shooter on the market, which I firmly believe the Maxus II is, and pair that shotgun with crappy steel loads, and you won’t kill many geese. That’s a fact. I realize shotshells are expensive, and finding 3-1/2-inch BBB steel at Walmart for under $25 per box is appealing, but these cheap loads won’t get the job done on big geese. If you grab your steel shotshell and it feels like a paperweight and the shot rattles like a baby’s shaker toy, you need to get a better load. Not only do these shotshells create horrible patterns, but they also cripple geese. Nothing is more frustrating than wounding giant honkers at point-blank range.

The cost of top-end steel and, my personal favorite, bismuth, and tungsten loads can make the heart beat faster, but I’ve found that because these loads pattern better and hit with absolute lethality, I shoot fewer of them than I do inexpensive steel loads. For example, you can spend $25 per box on poorly made goose shotshells and shoot a full box per hunt, or spend $38-$50 per box on top-end shotshells and kill your limit with fewer shells. 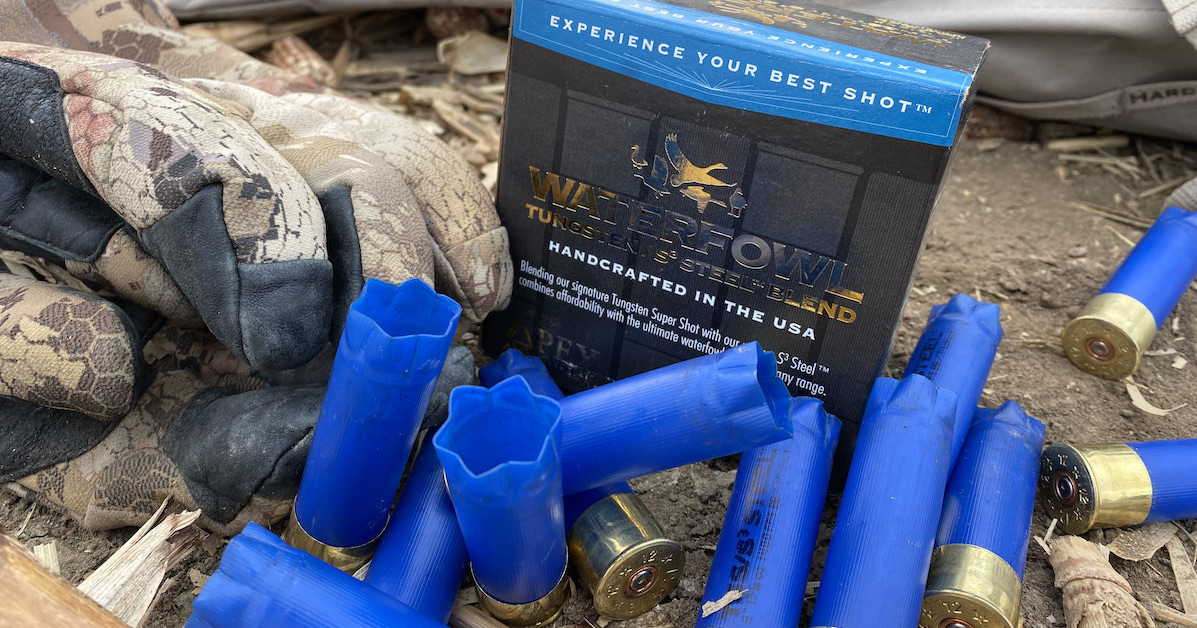 Earlier this season, our goose crew had a terrific cut cornfield filled will giant and lesser Canada geese. The weather was perfect — a stiff northerly wind gave our fakes movement, and the low cloud bank kept the birds on the deck. They fell into the decoys, and it didn’t take four of us long to kill five geese (a limit) a piece. I shot a total of seven times. Our fifth shooter, a budget shotshell shopper, shot 38 times and killed three geese. We could see the pellets hitting the birds, and most of these geese were under 30 yards, but the low-grade steel bounced off them like tiny rubber balls. Over a two-week period, I killed four limits of geese (five birds per hunter) and shot a total of 32 rounds.

Like shotguns, I’ve tested lots of goose ammo over the years. Here is a top-tier foursome — each has proved its salt time and time again in the field.

Giant Canada Geese Over Decoys: We get many of the giant subspecies in my locale. They are my favorite bird to hunt, and they decoy better than other species of Canada geese. When you can suck big geese over decoys and shots are between 20 and 35 yards, my go-to is Boss’ 12-Gauge 3-inch Mag #2s. Loaded with 1-1/2-ounces of copper-plated bismuth, these shotshells spread 150 pellets perfectly, and the custom hull and hot primer boost functionality in cold weather. A box of 20 will run you $39, but if big geese are the menu for you often, I recommend a $350 case of 200. 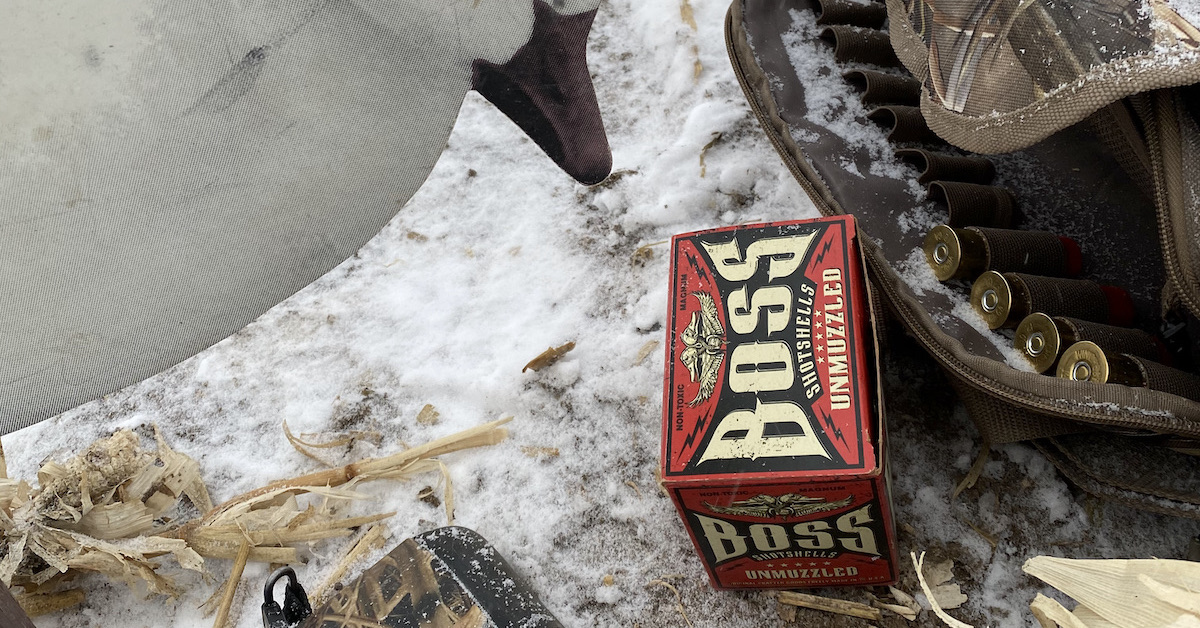 Lesser Canada Geese Over Decoys: When hunting lesser Canada geese, save your shoulder and throw more pellets with Fiocchi’s Golden Waterfowl Bismuth #4s. No, #4s are not too small for geese, especially small geese over decoys. These 3-inch shells provide a heavy 1-3/8-ounce payload and leave the muzzle at 1,450 fps. These shotshells are lesser wreckers, and the high density 9.75g/cc bismuth is precision loaded and moisture resistant. The sealed hull ensures remarkable performance every time you pull the trigger. Gold Waterfowl Bismuth comes in boxes with a 10 count, and at $32 per box, Fiocchi is awfully proud of them, and they should be. 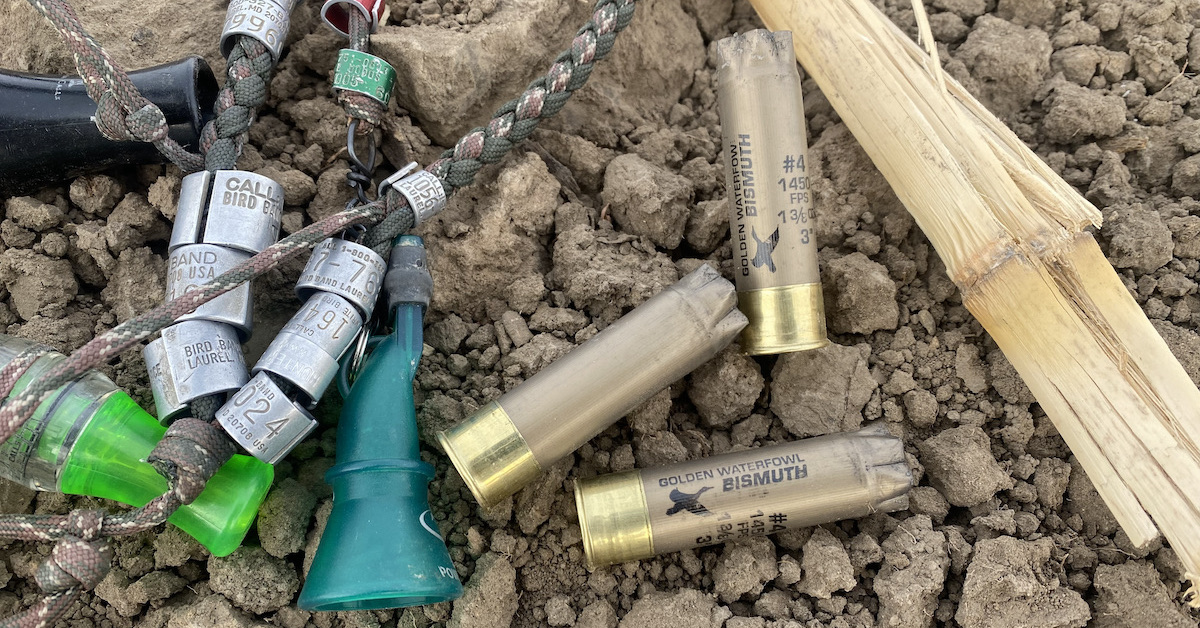 Canada Geese Over Decoys — Mixed Subspecies: Often, a good goose shoot is a mixed Canada subspecies bag, and more often than not, my Maxus II is loaded with Federal’s Black Cloud FS Steel 3-1/2-inch BBBs. This is the best steel shotshell I’ve found, and you can save some pennies by going with the 3-inch ($42.99) offering. It’s important to understand that a 3-1/2-inch shotshell is not more potent than a 3-inch shotshell. Instead, the 3-1/2-inch ($51.99) shotshell has more pellets, giving you more steel killers in the air. These innovative shotshells feature the rear-opening FliteControl Flex wad, which creates the best patterns I’ve ever seen. The mix of 40 percent FliteStopper steel and 60 percent Premium steel pellets quickly drop geese — bigs, mediums, and smalls. 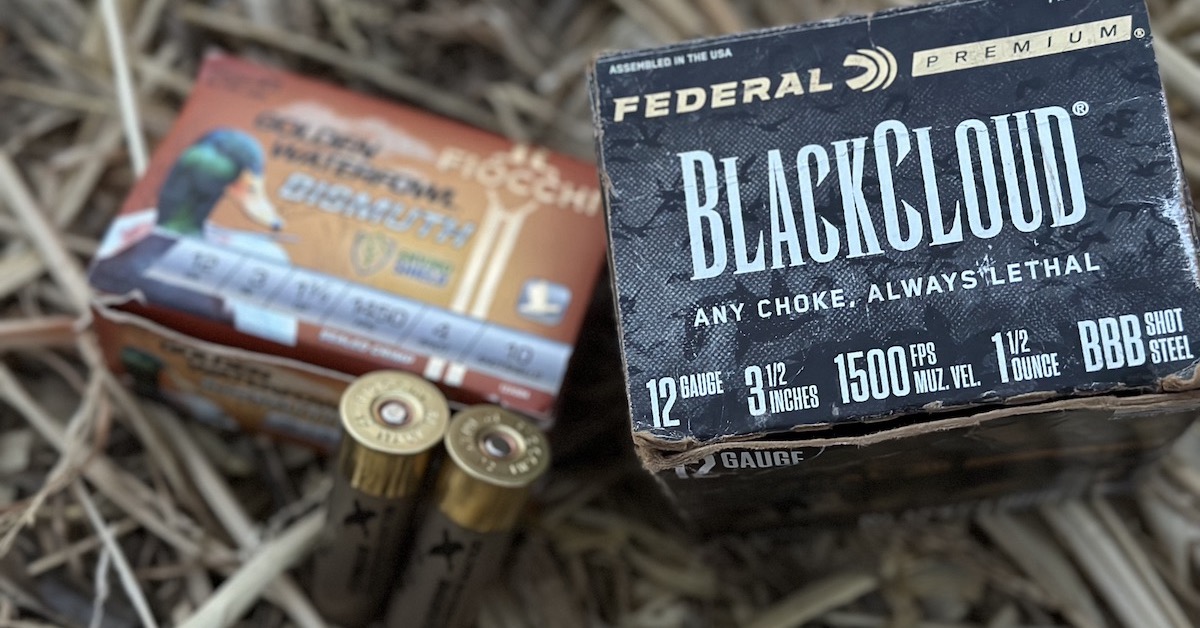 Canada Geese Over Decoys — Mixed Subspecies: Few do it better than APEX, and the manufacturer’s Tungsten/S3 Blend is ridiculously lethal. My go-to is the 3-inch, 1-5/16-ounce mixture of Tungsten Super Shot #7.5s mixed with S3 Steel. The TSS #7.5s crumble close-range geese, and the premium steel cleans up those birds hanging on the decoys’ fringe. Muzzle velocity, at 1,400 fps, is solid, and these loads don’t cripple geese; they put them down for good. This means more shooting and less chasing geese around the field or watching your trusty lab take a beating from heavy wings. These shooters will run you $49.99 for a box of 25.

It may be too late to make gun and ammo changes for 2023. Most Canada goose season will wrap up in a month or so, but that gives you the offseason to find your next goose-killing kingpin combo and be ready to dominate the skies in 2024.