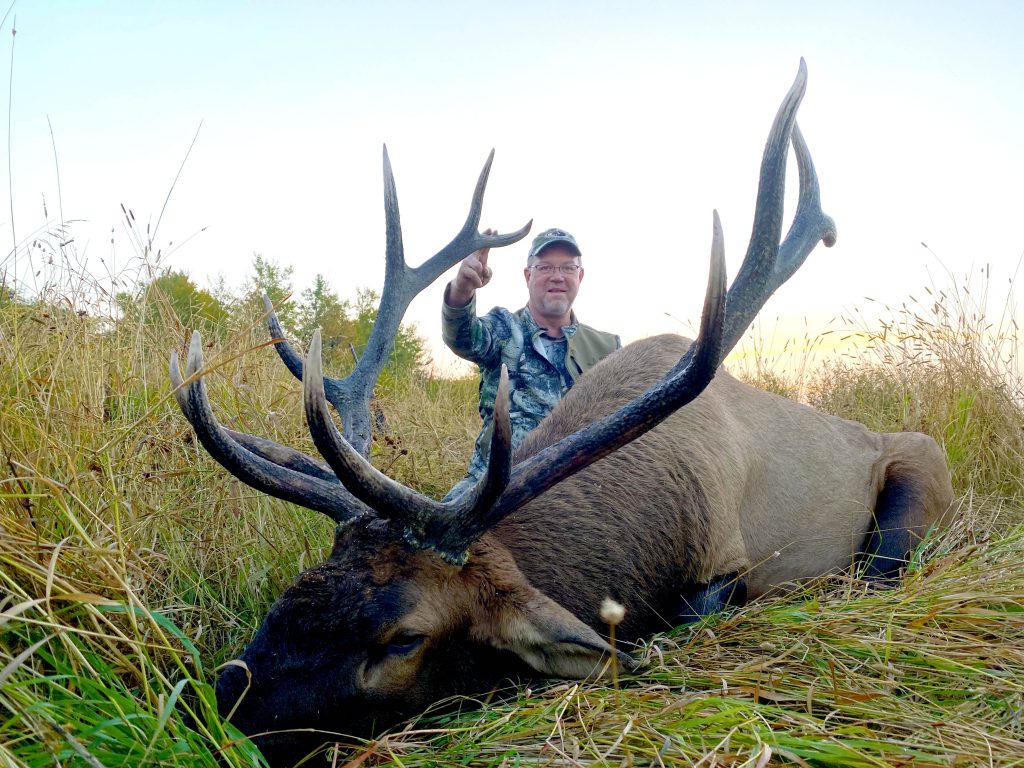 We started down an overgrown cutline right at legal light. My hunting partner, Jason Frank, is no stranger to elk and spends most of his fall in hot pursuit of wapiti. Jason grew up in the Peace Country of Alberta and shot his first bull before he started shaving. He has been hooked ever since and has mastered calling and deciphering where elk live.

Our cutline had a hole weaved through the dense alders, and we trudged through just like the elk and moose who carved out the path. We eventually turned onto a well-defined game trail. However, the surrounding jungle of shrubs and trees made it difficult to see more than 10 yards in any direction. Jason motioned to stop and raised his elk call. The deep, guttural bugle resonated through the mature forest like a trumpet in a symphony theater. Seconds later, a distant bull screamed back, which lit up another bull beyond it. It was game time.

Jason turned with that telltale smile, and I knew it would be a scramble to keep up with his long legs. Winding trails, sliding over deadfall, and slinking through small grassy meadows eventually put us downwind of our quarry. Another bugle broke the silence as Jason challenged the resident bulls. The response was deeper into the timber, and without hesitation, we were off on another gallop through the boreal.

We played cat and mouse with the bulls all morning and never did lay eyes on them. Elk are masters of their home woods and know precisely where to avoid competition and hunters. By the amount of elk sign that we saw, one would have to guess that the competition for cows was steep. If a bull were fortunate to be courting a few ladies, it would be in his best interest to avoid other bulls. 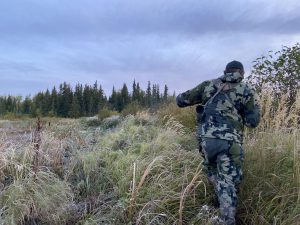 We ran about eight miles on game trails before deciding to have lunch and getting back after the elk. The warm September day had pushed the elk into the mature timber where the long shadows kept them cool and comfortable. The woods stayed quiet for the longest time. We slowly meandered through game trails and cutlines, looking at the fresh sign and trying to get close enough to a bull to make it uncomfortable and force a response to the calls. When the sun started to set, it was as though the elk flipped a switch and everything went into high gear. Cows were mewing, bulls were screaming, and it didn’t take long for us to target a deep, snarly bugle of an old bull. We pushed in tight and were not alone—several satellite bulls screamed beside us, and we giggled with excitement.

We pushed towards the big bull and kept calling. The herd was on the move, and we ventured farther into the abyss of elk country. The sun had set, and we were within 50 yards of the bull. The snorts, deep breathing, and raspy screams seemed as though they were right in our faces. Jason got down on his hands and knees to see if elk legs were moving in the dark timber. We had run out of legal shooting light and looked at each other wide-eyed with huge smiles stretching across our faces. The sweat dripped off my brow and stung my eyes from the steady march through the absolute shin tangle the elk call home.

As darkness started to descend, the elk lit up. We could hear ten different bulls, and all were worked into a frenzy as we found an open line that would take us back to the truck. A bull bugled within spitting distance. We stopped and listened as the bull walked through the timber within bow range, snapping and breaking branches along the way. We stood silent and let the bull head towards the rutting action.

The next morning was filled with excitement and anticipation. We were standing in the dark, discussing our approach, when a distant bugle broke the silence. Jason and I looked at each other with a surprising reaction. We thought the elk would be deep in the timber, but they had worked several miles northeast. By the sounds of the chatter, the big bull had a harem assembled and was protecting it from the competition. We were off on another foot race.

We dropped into the timber to get the wind advantage and started to make our way towards the steady screams of rival bulls. The energy was beyond description, with cows mewing and chirping as though encouraging the bad behaviour of the local bulls. A long meadow was brightening quickly and could be made out through the timber. We closed the distance carefully and listened to the ruckus.

When we caught our first glimpse of elk, it was magical. The ground fog was hovering over the meadow, and the elk emerged like apparitions as they ran back and forth. We were still too far for a shot and slowly worked our way towards the elk, staying in the confines of the forest. We slipped to the edge to get a better look at the bull. Five or six cows stood alert in the background as other fed contentedly. The bull had its head and neck stretched out as he ran through his harem, bugling as loud as possible. Smaller bulls were scattered in the distance, not wanting to provoke a fight.

Jason and I discussed options to get within shooting range when I spotted another bull less than 100 yards away. I told Jason not to move as the mature bull strutted out of the trees and stomped towards the bull tending his cows. I could see six long points on the rack’s left side, and when the bull was heading into the meadow, Jason turned to get a good look. The two big six-point elk were about to get down to business. Jason knew it was our opportunity to make a move, and we scrambled down the forest edge to cut the distance. 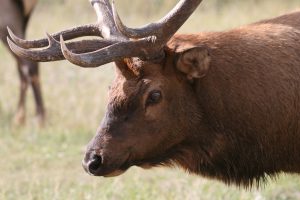 I positioned my shooting sticks and watched the elk as the challenger trotted straight at the competition and bugled in his face. The fight was on. The bulls smashed antlers together and fought as though they wanted to kill one another. The cows stood watching, and the bulls pushed with all their strength, sending grass and mud flying in every direction. The scrap didn’t last long, and the challenger found out he had bitten off more than he could chew.

The dominant bull put a chase on the challenger, and they sounded like a D-8 caterpillar plowing through the alders. The trees shook violently as the bulls raced through the tangle of limbs. The dominant bull growled and moaned as he tried desperately to get one more antler gouge into the bull that dares contend.

Jason was busy trying to judge the bulls, as both were outstanding. The herd bull returned to his ladies while the loser started back across the meadow towards us. Jason finally agreed that the dominant bull was the best, and as I tried to settle my crosshair, the other bull closed to within 70 yards and caught our wind. The jig was up.

The bull had just lost a major fight, but when he stopped on a dime and lifted his head, the entire herd took note. The cows started to mingle, and within seconds the entire herd took off in a charge for the distant timber. I followed the bull in the scope as he ran away at 250 yards. When he turned direction slightly, it provided my opportunity. I squeezed the trigger on my Browning X-Bolt. The resounding whack of the bullet finding its mark was unmistakable, but the bull kept running.

We sat down and decided to give the bull some time. It had made it to the far side, but the shot looked good. I was sick with anticipation, and when we finally started our walk, I was busy trying to find a blood trail. Jason, however, spotted the antlers sticking up out of the grass through a snarl of alders.

The elk hunt only lasted a couple of days but was an outstanding adventure and experience. The elk put on a show that will leave me dreaming about the chase until next fall.

Browning developed “semi-custom rifles” with exceptional finishes, custom-grade triggers, and carbon stock with a noise-dampening foam. The X-Bolt Pro Long Range Burnt Bronze was deadly accurate on the elk hunt, providing the performance and confidence to harvest a big bull with a single shot. The fit and feel of the rifle make it intuitive for shouldering and finding the target fast. Browning.com 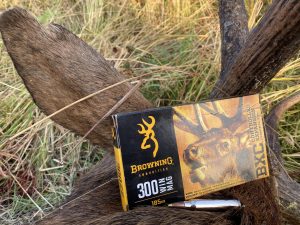 The Leupold optics with HD glass are exceptionally clear, providing more detail than what I was used to seeing. The VX-6HD with 3-18X44 brings the accuracy of a good rifle to light. The illuminated reticle draws your eye to the target and pinpoints an aiming spot. The custom turret (CDS) was a natural fit for the long-range rifle used on the hunt. The BX-5 SANTIAM HD binoculars were outstanding, even in low light conditions. Leupold.com 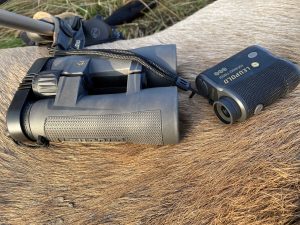 What’s in your elk hunting pack? I like to keep it simple when on the move and carry extra ammunition, a knife, water bottle, Scent Killer Wipes, rubber gloves, and my license and tag. When dealing with challenging weather, a rainjacket and vest might are packed. When running on game trails, the Alps Covert pack is ideal, as it clips at the waist and rides on your lumbar. For longer days in the field, and when anticipating packing meat and antlers, the Hybrid X is the only choice. The Bino Harness X keeps binoculars safely stowed. The silent retrieval is perfect when hunting in tight quarters to elk. Alpsbrands.com

It is next to impossible to beat the nose of an elk. To make things worse, they are generally in herds, meaning there are dozens of noses to get past. Playing the wind is crucial to success, and we continually sprayed down with Scent Killer Gold. When running trails, perspiring, and cutting through areas with elk around us, it is just as important not to be seen, heard, or smelled. www.wildlife.com 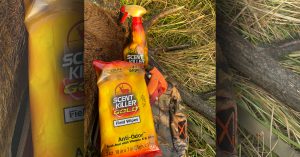 For an adventurous, Alberta elk hunt, contact outfitters Jason Frank 780-500-114 or Braden Frank 780-864-6446. They offer archery hunts, and firearm opportunities during the September rut through the end of November.