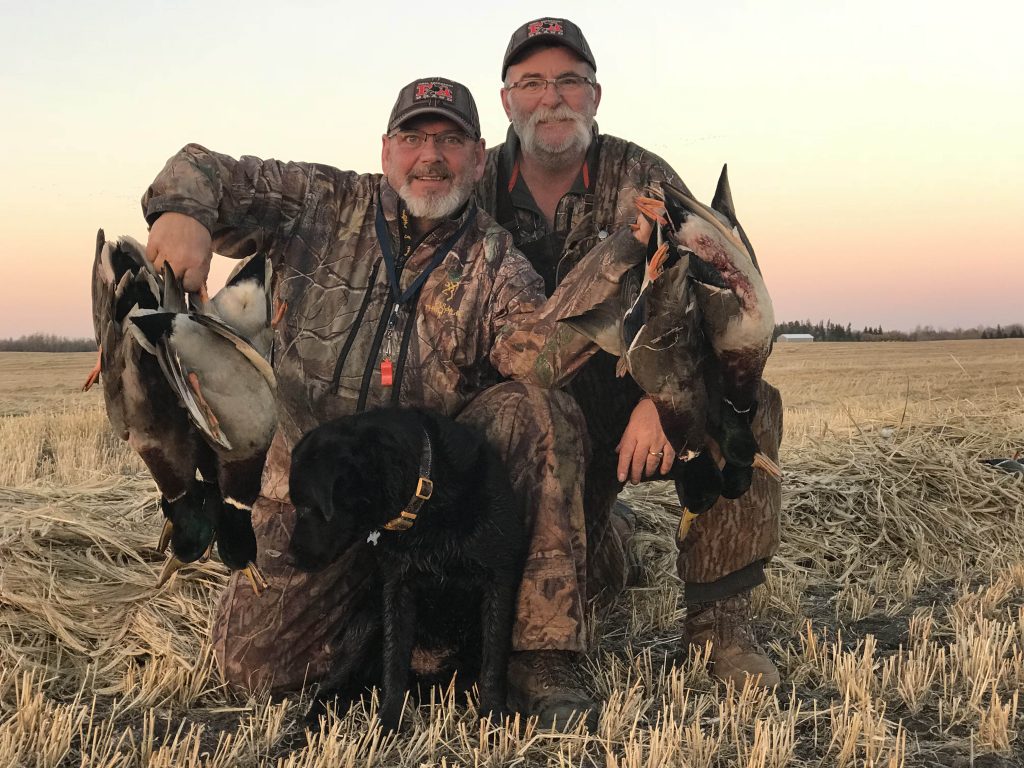 It’s nice to have friends as fanatical about waterfowl as yourself. It was October 22nd, and with a full moon burning a hole in the nighttime sky, the waterfowl hunting was tough. Ducks were not coming out early in the morning and often showed up in fields as hunters were packing up hours later. There wasn’t any rhyme or reason to their erratic feeding behaviour, but it was noticeable.

Spotting was frustrating, with thousands of birds filling the sky as legal light expired in the evening. I don’t know if it was their way of avoiding hunting, or if they preferred a late feed under the moonlight? The way they were acting, I think the moonlight was extremely attractive for them.

Josh Luedtke called to discuss some ducks he had been watching, and we both agreed that we should set up early afternoon and hope for the best. Lots of birds hit the fields at 10:30 or 11:00 in the morning, followed by a constant trickle until late afternoon. The mallards and pintails were feeding in small groups, and if we were reading them correctly, they were taking turns instead of dining in large flocks.

Josh’s dad, Ralph, was up for the hunt and friends Cam Morrison and Kevin King were more than eager to knock the dust off their smoothbores to get into the field. Kevin hadn’t hunted ducks in over two decades, and Cam had a young lab named Jake that he was itching to get more field time and training. 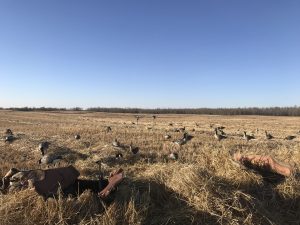 The five of us packed decoys and blinds into our trucks and headed for the field early in the afternoon. We opted to take a smaller spread to keep setup and takedown easy. There were still barley swaths in the field, so hiding blinds wasgoing to be simple. And, to top things off, the landowner was anxious for us to get back out to shoot more of the ducks that were chowing through the grain at an alarming rate.

As we drove into the field, we kicked up about 250 mallards that were sitting right where we intended to set up. We drove around the swaths in a long route to the hill where the birds wanted to be. It looked like the perfect duck magnet, with full swaths of grain on the ridge, where they could oversee the entire field. To top things off, there were several small wetlands close by that the ducks bounced in and out of to get a drink of fresh water.

We unloaded our gear, and while some of our party drove trucks out of the field, the rest of us went to work stuffing blinds and setting out decoys. We hadn’t been in the field for five minutes when small groups of ducks started to dive bomb our location. We ignored the birds, knowing the sooner we got set up properly, the better off we would be for the hunt.

Besides having a full moon, the temperatures were unseasonably warm. Being able to hunt in a shirt in late October was a treat. With bluebird skies, hardly a breath of wind would normally be considered a challenging day to hunt ducks.

We got tucked into our blinds, and Cam tried to work out a way for Jake to see the action while staying hidden. There was still some adjusting going on in the blind when the first flight of ducks centered up on our decoys. Five mallards came in like they hadn’t eaten for days. There wasn’t any hesitation or circling, they just cupped their wings and soared in at breakneck speed. When I called the shot, shotguns roared, and Kevin giggled with excitement. I knew at that moment it wouldn’t be 20 years before he hunted waterfowl again. 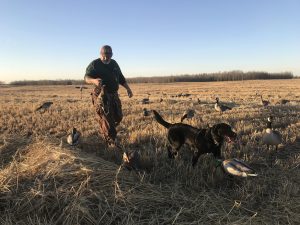 Minutes later another flock of pintails headed out the far side of the field. A little calling and the birds swung around for a look, and once they pinpointed the decoys, they made immediate dinner plans. The drakes in the flock were easy to identify with dark chest and head feathers, and the start of a sprig growing from their tail. With visual indicators, we picked on the boys in the flock and let the hens head for safer ground.

It was mid-afternoon, and the ducks should’ve been content to sit on a day roost pond and soak up the warm rays of the autumn sun. The activity was a strange push of birds that could only be described as something like ocean tides. The moon does strange things to wildlife activity and the times they have major movement. But, if hunting ducks in the afternoon was the productive way to hunt a full moon, we were all for it.

The sun was still high in the sky when some larger flights of 15 to 20 ducks started to take to the wing. Most of the birds would come off a large wetland to the north, and swing past the far end of our field. If we called, or the birds saw our decoys, they would come in. When we weren’t paying close enough attention, some birds continued to head south, and away from us altogether. There was continual movement, but no large groups of ducks.

Some of the drake mallards looked spectacular, with chestnut-coloured breasts and brilliant green heads. Whenever a flock of mallards decoyed, the drakes would certainly get hit first. There were several times I watched the greenheads drop, making it difficult to find a bird to shoot before it was already falling.

Everyone seemed to be shooting extremely well, and the birds were piling up fast. There was so much action, most of us would pick one duck out of a flock and stop shooting. It was obvious the birds were going to keep coming and stretching out the hunt wasn’t much of a risk. A hen mallard tried to land several times, and we just watched her. There was a definite affinity for green, and with grain-fattened drakes coming in, we were starting to hold out. 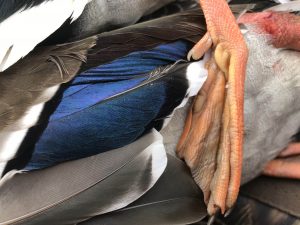 Jake was getting lots of retrieves, and we collected birds after each volley so that we wouldn’t lose any under the swaths. Cam worked Jake downwind of birds we saw fall, hoping to nose train the young dog to smell for ducks. We did have a couple of longer retrieves but managed to pick up the birds and add them to our bag.

Near the time when the ducks should typically start to fly, we almost had our limits. Ralph had been holding out for some mallards and shot two out of a flock on his end of the spread. Without much wind, it was difficult to center up every group, but it didn’t matter, as we all got plenty of opportunities. Josh and Ralph were on the far end of the firing line and called birds off that side, while I was on the far south calling the shots for birds that centered or slid more my way. Cam and Kevin were in the middle laughing and chuckling like kids in a candy store.

As the western horizon started to change to the warm pastel orange hues indicating a setting sun, we had 40 ducks on the ground. We gathered birds and took pictures. Jake looked at us like we were crazy to be packing things up. We had all the decoys back in the truck, blinds cleaned of barley straw, and sat back to watch birds continue to work the sky.

It is strange to have an evening hunt where you pick up decoys long before the sun sets. We drove out of the field and passed the combines racing to get the grain in before old man winter would steal the opportunity. We all mentioned we would be watching the moon phase a lot closer next fall, as the afternoon shoot was quite enjoyable. It made for a special day with good friends, which is what makes waterfowl hunting so special.