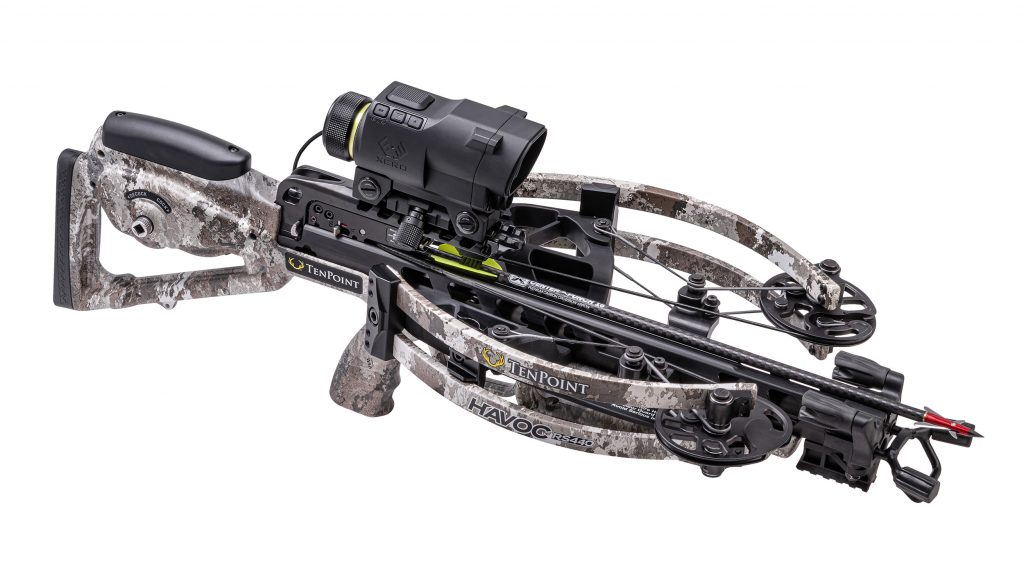 As the name implies, the TenPoint Havoc RS440 will wreak chaos, destruction, and disorder in the local deer woods. The RS portion of the name represents the reverse-system limb design with an honest speed rating of 440 fps. The speed ratings are usually calculated under standards not typical of a hunting situation. There are many ways to influence a speed rating. However, TenPoint is stepping up to let bowhunters know what can honestly be expected with a standard hunting arrow and broadhead.

Testing was done at temperatures well above freezing and in the extreme cold that some hunters in North American might encounter. The results were consistent at any temperature.

The chronograph has shown most crossbows with a higher speed rating do not shoot with the same “hunting speed” as the Havoc. Part of the Havoc’s speed comes from a new arrow design. The 16-inch carbon arrows are 400 grains with a balanced 17.5% FOC and .001-inch straightness. A complete pass-through on my buck last fall answered the energy questions surrounding the short arrow. 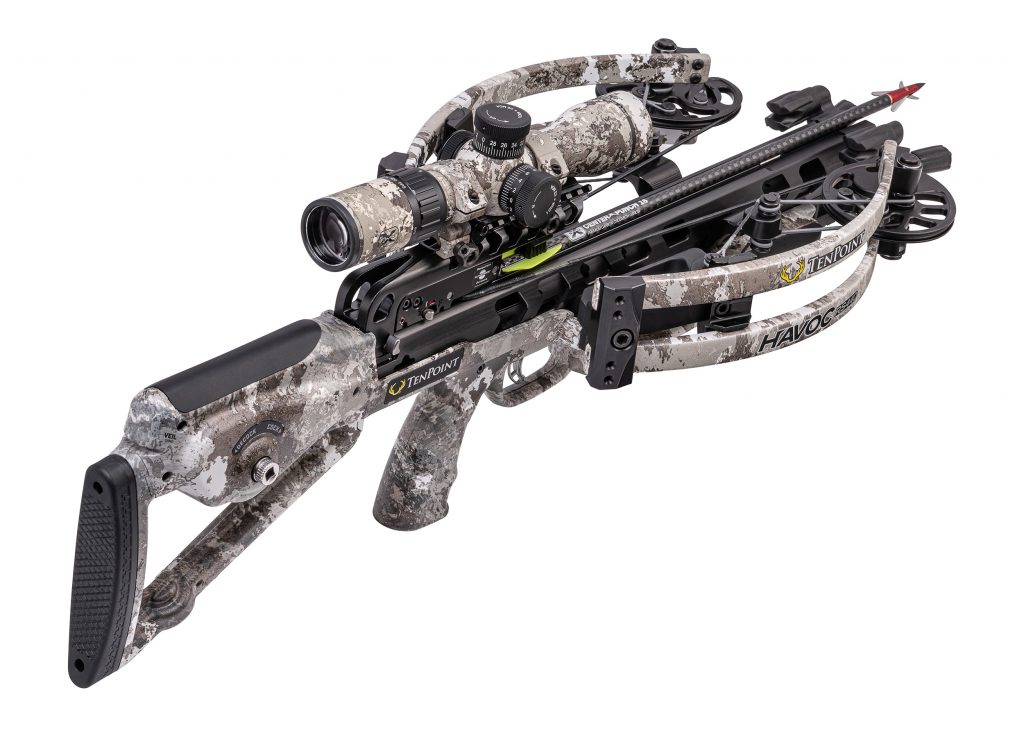 The Havoc RS440 is in TenPoint’s premium line of ACUslide-series crossbows introduced in early 2020. The ACUslide system was ground-breaking technology, allowing the crossbow to be cocked and de-cocked with a charging handle under a mere seven pounds of pressure. The ACUslide system measures a super-short 26.5 inches long and can be operated silently. The charging handle is stored in the crossbow’s buttstock to ensure it is always close at hand. The ACUslide allows the user to stop cranking at any point during the cocking or de-cocking process without having the handle fly out of control or have the string release. The safety feature prevents dry firing and adds an extra level of protection for users.

The ACUslide is more than a cocking mechanism and includes a Trigger Lock-Latch that locks the trigger box in place each time the string is cocked. The device removes tension from the cocking strap, ensuring the trigger box is locked in the same position before each shot. Consistent cocking and pressure translate to consistency and a proven 48% tighter down-field arrow group. The ACUslide cocking unit was well thought out and fits inside the TEC-TACTICAL stock body, providing a straightforward and streamlined design.

Reduced overall length and weight of the Havoc’s stock means the bow can be held in position for a more extended period, a real advantage for a crossbow hunter. TenPoint engineers reduced the weight and length wherever possible, without compromising integrity, to produce the TEC-TACTICAL stock.

The glass-filled polypropylene stock is strong, durable, and lightweight, making it comfortable to shoot and still provide the strength as a platform for one of the fastest crossbows on the market. When you shoulder the Havoc, it feels balanced and light, making it a true advantage for hunting. The length-of-pull measures 13.5 inches at its shortest position, meaning it is easy to control and operate without movement. The length-of-pull is easily adjusted with spacers for a custom fit and feel. The grip is ergonomically designed, adding to the stability and intuitive finding and operation of the trigger.

The accuracy is improved with the new trigger featuring a two-stage, zero-creep design. The trigger uses a roller sear system that sets a new standard in high-performance crossbow accuracy. Not moving the crossbow while pulling the trigger fundamentally increases accuracy.

Reduced weight and friction are achieved with a short and slender, fluted aluminum flight rail referred to as a MICRO-TRAC. A lower overall weight and improved crossbow balance are but two advantages. However, the ultimate advantage is a 50% reduction in flight deck surface compared to conventional crossbows. The MICRO-TRAC rail’s radiused profile means less surface area for the string to pass over than a flat surface track. The profile reduces energy-robbing friction during arrow launch while increasing string life to over 1,000 shots, an industry high mark.

Why a Short, Compact Crossbow?

The Havoc is 26.5 inches in length and 7.5 inches wide axle-to-axle when cocked, sporting a 13.5-inch power stroke. The benefits of a short, compact bow include stability and ease of movement. There is less forward pitch and left/right roll than with longer and wider crossbows. Hunters will enjoy the benefit of holding the crossbow for extended periods while waiting for an animal to provide a shot opportunity. Gone are the days of holding a front-heavy crossbow that leaves your arms shaking and weak after a short hold.

Using the short bow in a blind or tight quarters is where it shines. The reverse-draw limbs reduce the chances of making contact with other objects when shot.

The Havoc delivers a correct and honest launch speed of 440 fps and 172 ft/lbs of energy. When tested in an extreme -40°F, the bow was consistent and as fast as the rating.

The 13.5-inch powerstroke works with a lower draw weight for maximized energy transfer to the arrow while minimizing noise and vibration. The dual string dampeners work to reduce vibration further.

The Havoc shoots the new 16-inch EVO-X CenterPunch arrows. The short arrows with 100-grain broadheads will weigh in at 400 grains, ensuring maximum kinetic energy and penetration. I used the Havoc to shoot a white-tailed buck, and at 32 yards, the arrow made a clean pass through.

TenPoint introduced the new EVO-X Marksman Elite scope as an option on the Havoc RS440. The scope’s speed adjustment was extended to 500 and features a new reticle design. The Marksman Elite uses alternating crosshair and circle aim points to reference distance quickly and easily, without counting hash marks. The system is intuitive and cleans up the optic for shooters to concentrate on the animal.

TenPoint has also partnered with Garmin to package the Havoc RS440 with a Xero X1i crossbow scope. The rangefinding scope is intuitive to set up and provides a single aiming point adjusted for angle and distance. An activation button is mounted on the crossbow. The new optic technology takes the guesswork out of shooting at a target or moving to use a handheld rangefinder.

The TenPoint Havoc RS440 comes complete and ready to hunt, with six EVO-X CenterPunch 16 (16-inch) carbon arrows featuring straightness of .001 inches, a 6-arrow bow-mounted quiver, and a string stop dampening system. The stock and limbs are dipped in either Veil Alpine camo or Graphite Gray. The ACUslide cocking system adds to the safety and convenience. The only real decision is to get the Xero X1i rangefinding scope or the EVO-X Marksman Elite scope?