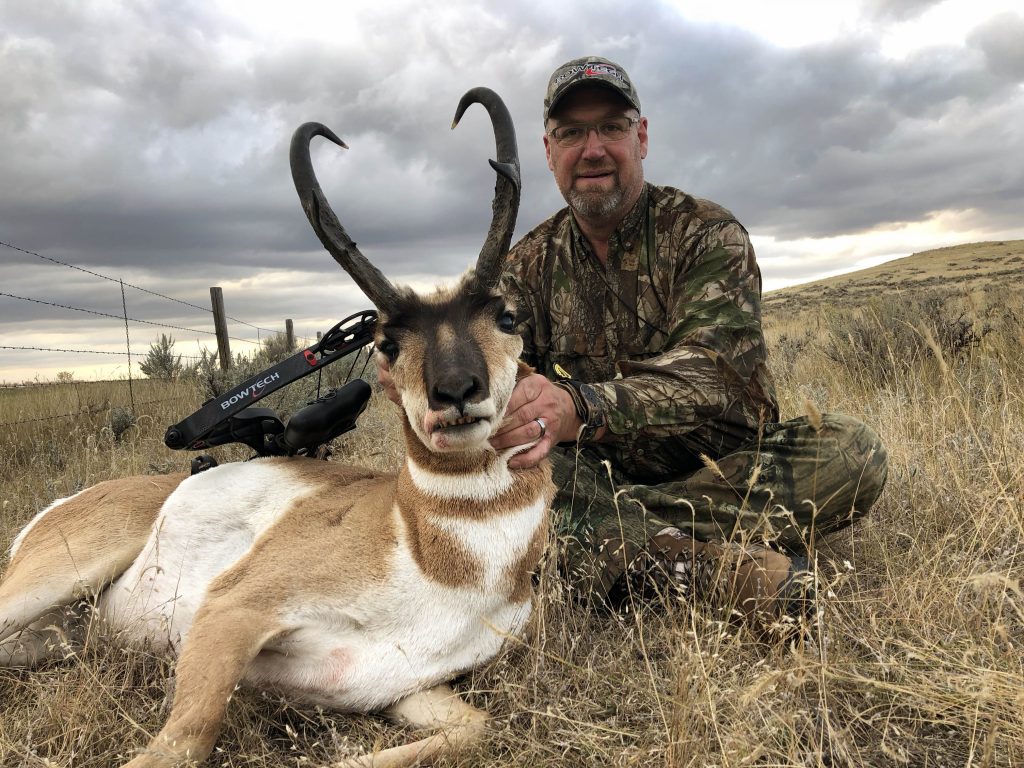 An antelope buck suddenly appeared on the rise in front of me and headed to the water’s edge to get a drink. Facing me, the buck didn’t look that impressive, and I didn’t even lift my bow. The buck drank for a couple of minutes before turning broadside to exit. The side profile was shocking, to say the least—the buck sported extremely heavy horns and had a split prong and several abnormal growths that couldn’t be seen head-on.

My heart rate quickened immediately, and I raised my TenPoint Stealth crossbow and found the buck in my scope. With the rut in full swing, the buck stopped at the rise and raked his horns through some sagebrush to mark his territory. It was my moment of opportunity, so I squeezed the trigger gently and launched my arrow down the rail.

The buck spun and whirled over the ridge in a split second. The shot felt good, and after waiting 15 minutes, I tiptoed up to the spot where the buck had been standing. There was no sign. No blood. No arrow. And, just when I started to get that sinking feeling, I saw a white belly about 35 metres away in the sage. The buck had made such a quick retreat that there wasn’t any time for him to leave a blood trail, and my arrow passed clear through the animal and was neverfound.

To say it was a good start to our antelope hunt would be an understatement. With significant waits to draw a trophy antelope licence in Alberta, we had applied for licences in Wyoming, where there are still more speed goats than people, with close to 400,000 antelope in the state. With liberal hunting options for non-residents, it is a good option to consider while waiting for a draw in Alberta.

My brother Dave was along for his first ever antelope hunt with Trophy Ridge Outfitters. He has hunted elk and bear with me in Alberta but was still looking for his first bow kill. Dave set up a new Bowtech a couple of years ago and has practiced diligently, with the hopes of arrowing a big game animal.

Dave also had a great first day, with several antelope coming to his watering hole. The weather was warm, and the rut was keeping animals on the move, which meant they had to drink. Several bucks teased Dave but never came within a comfortable shooting distance. Late in the afternoon, his luck changed. The biggest buck of the day wandered in and lingered around the far end of the water. The buck eventually came within Dave’s set shooting distance, and it was game time. Where Dave was sitting in the blind, the buck was difficult to see out of the shooting window. Dave drew his arrow and slouched to see the buck through the opening. When he released his arrow, it sailed straight but hit the buck in the lower front leg. Slouching forward had changed his aiming point, and the antelope with a broken leg headed for safer ground.

That evening, Dave was sick over the mistake he had made. I could tell he was beating himself up and frustrated for not keeping proper shooting form in the heat of the moment. I reminded him to keep his head in the game. The buck was still out there, and with two days of hunting left there was still plenty of opportunities to get the job done. At first, Dave questioned, “do you really think so?”

“Of course, I do, chances are good it will return to the watering hole, or bed in a place where you can make a stalk—just stick with it.”

The next morning Dave was up before the sun and had his gear ready to go. Our friend Joe was along, and our brother-in-law Ken. The three of them headed for their blinds well before the sun came up.

Mid-morning Joe texted that Dave’s buck had come into the water hole he was sitting. The buck bedded just 20 yards from Joe’s blind. However, the buck didn’t stay long enough for Dave to get there and try a stalk, but at least they were able to keep tabs on it.

Dave made it through day two and was still positive heading out on his last morning. His positive thinking must have come into play, as his buck was spotted headed toward his blind. The buck wasn’t moving fast and would travel a short distance before bedding. Minutes turned to hours, and Dave eventually had his buck standing within bow range. Making sure to keep his shoulders up, and maintain good form, he drew his arrow, settled his sight pin on the prized buck and slowly squeezed the trigger on his release. A horrible “smack” echoed through the blind, and he watched his arrow skip three times across the surface of the water before disappearing into the far bank. The antelope wasn’t sticking around to find out what would happen next and headed for safer ground.

Dave’s arrow had caught the edge of the blind window, causing it to get pulled off course and mess up his chances of shooting the buck. It was the last day for his hunt, and instead of sitting and waiting, he decided to go after the antelope. The buck hadn’t traveled far and was bedded on the edge of a large hill.

Dave used the relief in the land to slowly cut the distance while making sure the wind stayed in his face. Inching to the break of the hill, Dave spotted the buck’s horns ahead. Crawling a little closer the buck slowly came into view. A quick look through the rangefinder confirmed the buck was within shooting distance, but the extra movement was enough to send the buck running before an arrow could be drawn.

Dave was feeling dejected but watched the buck run a couple of hundred yards before bedding against a largesagebrush. The buck was again approachable, and Dave got closer. However, before he could get near the buck a herd of antelope just beyond Dave’s wounded buck wandered closer. The dominant buck in the herd had watched Dave’s buck come closer and took exception to having competition in the neighbourhood. The rival buck left the herd and raced towards the one bedded under the sage.

Dave’s buck didn’t even have time to get out of its bed before the other buck slammed into it with horns held low. White fur flew in the air as the weak buck got to his feet only to be nailed by the horns of his rival. The weary buck tried to make a retreat, but the aggressive nature of the other buck didn’t allow it. The rival buck continued to sink the cutters on his horns deep into the rear and flank of the buck trying to escape. The two jostled and battled until they were on the edge of the pasture, along the barbed-wire fence. Dave’s buck tried to exit under the bottom strand, but his competition wasn’t going to have any part of it. The aggressor relentlessly hammered the buck until the wounded buck’s horns were tangled in the barbed wire and it was unable to move.

Dave made a mad dash towards his buck, stopped at 30 metres and shot an arrow into the vitals. This whirlwind of unbelievable events was a first-bow-kill story to rival all others. Lessons were learned in a short period. All archers are taught lessons by being in the field, but Dave suffered through repeated torture seeing his buck keep getting away. Was it fate, or just the archery gods looking down on my brother that allowed a feisty rutting buck to provide a technical assist in harvesting the antelope?

Whatever the reason, Dave was thrilled to get his first antelope and openly shares the story with anyone that will hear it. It often takes several minutes to tell, between the laughter and disbelief with each segment of events, delivered in a play-by-play narrative that others think must be fiction. Strange things happen in the hunting world. If you don’t believe me, just ask my brother.

Alberta residents can apply to hunt antelope in Wyoming annually. The state has a great website to help you plan your hunt and decide where to apply. Go to https://wgfd.wyo.gov/Hunting/Hunt-Planner/Antelope-Hunting.