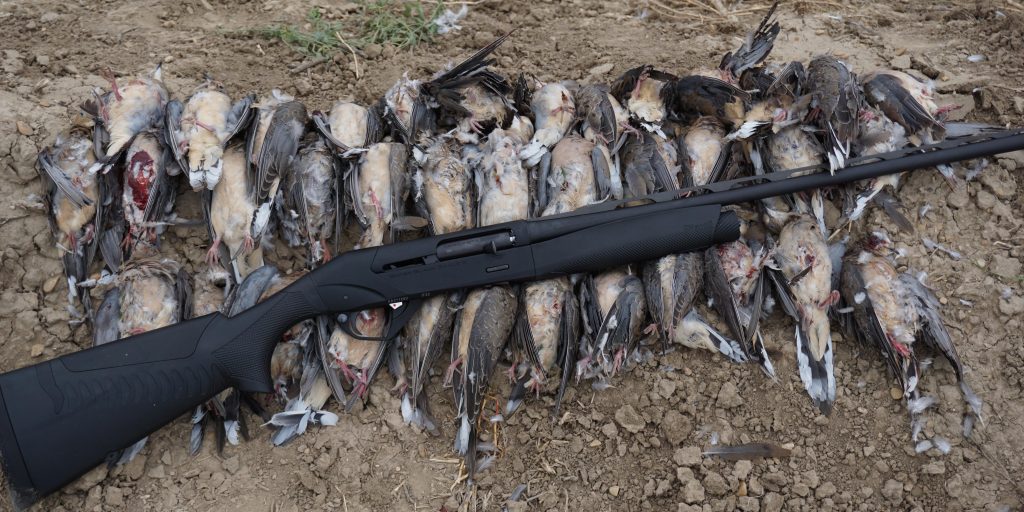 If you’re in the market for a light, reliable, and deadly shotgun that packs a punch but is light on the shoulder, Benelli’s new-for-2022 Super Black Eagle 3 28-Gauge should be on your wish list.

I wasn’t thrilled about heading to the dove woods with a 28-gauge. It’s not that I’m not a sub-gauge fan; I’ve puffed more than a few feathers with my 16 and 20 gauges. Still, I like my 12. I love its fit and feel, and because we’ve been an item for so long, I shoot it well and can reach out and touch fast-flying morning doves at a distance. Not to mention, I like all those pellets going out into space.

The Benelli Super Black Eagle 3 28-Gauge was a beauty, and I felt a little better because the 26-inch barrel had the manufacturer’s legendary stamp engraved into it. Benelli is renowned for producing gritty, reliable shotguns that promise the highest levels of engineering and performance. This one was cloaked in Black Synthetic, but many camo stock-finish options are available. 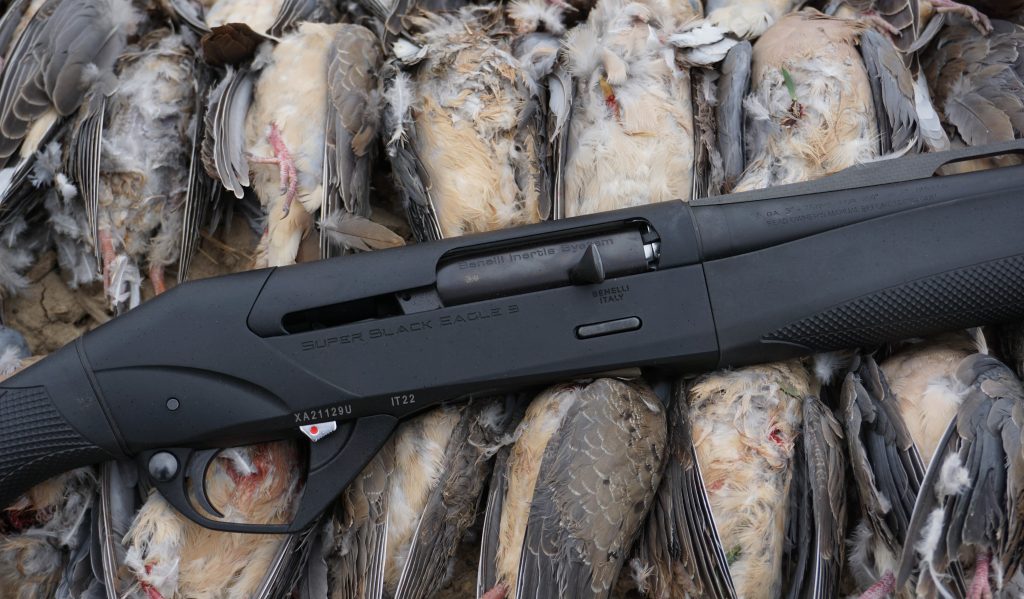 I’m not going to dive deeply into the SBE 3’s aesthetics or build; however, there are some things you need to know — things I appreciated — things that make this sub-gauge a worthy in-the-field companion.

This shotgun heeds the light and airy call from its carbon-fiber barrel rib to its slim and narrow nature to its Combtech synthetic stock. It throws down smoothly and, once shouldered, swings left, right, up, and down with a silky smooth balance any wing shooter will appreciate.

I love the Oversized Bolt Handle & Saftey. I hate fumbling with a lesser bolt that makes the action difficult to work, and when I want the gun to go from hot to cold, I want a sizeable rounded safety near the trigger guard I can manipulate even when wearing heavy gloves. Benelli put these two features at a premium, boosting this shotgun’s functionality.

The barrel screams Benelli. Crio System Technology has been a Benelli win for years, and the gun builder has no reason to drift from it. Long story short, the Crio System creates a slicker surface, which means wads face less resistance as they scream down the barrel. This smooth discharge leads to astonishing patterns and keeps the barrel cleaner for a more extended time. You won’t believe the patterns you’ll get with this sub-gauge.

Of course, you can’t beat Benelli’s Combtech & Comfort Tech 3 stock, either. This thing feels excellent against the shoulder, and recoil is significantly reduced when the shotgun booms. 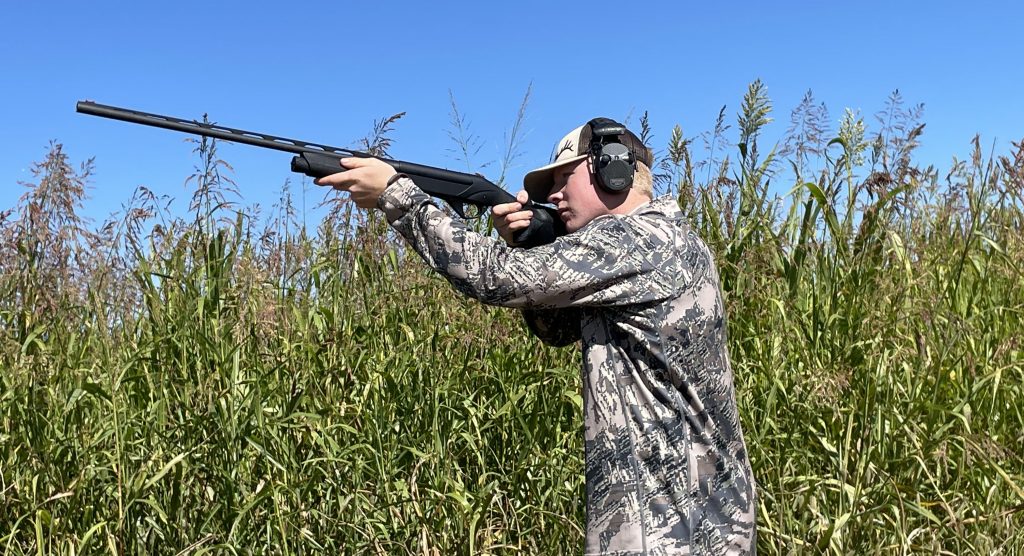 A shotgun can look like a dream come true, but my stamp of approval never comes out until a field test is complete.

Yes, I realize the SBE 3 28-gauge was created to be more of a waterfowl wrecker, but because the Inertia-Drive System never requires adjusting, the shotgun cycles light and heavy loads effectively, and this particular model will handle 2-3/4 and 3-inch shotshells.

I hit a favorite dove flyway with a couple of boxes of Fiocchi’s Golden Pheasant 3-inch #7 1/2s, loaded in my MTM Case-gard.

I’d love to tell you the first time the SBE 3 28 went boom in the field, feathers flew, and a dove died, but that would be a lie. Though I’d tested the shotgun extensively, patterning it with various Crio Chokes at different ranges with an array of shotshell brands, it was a swing and a miss for me.

The next flock of seeking-wheat fliers glided toward our MOJO Voodoo Dove decoy, and I pulled a clean triple. That last bird was out there — beyond 40 — and the Benelli 28 paired with Fiocchi Gold Pheasant crushed him.

I took quick note of how fast the gun shouldered, how well it swung through the air, the speed of the action, and how because the recoil was zero, I was able to acquire target after target. As the hunt went on, I also noted that the shotgun forced me to be more accurate, and I knew I wasn’t sending the same amount of pellets into the air that I had with my 12 gauge, which in the end, actually made me more accurate due to my increased focus.

The Red-bar front fiber optic sight was bright and easy to see, but there was no halo effect, and the end of the bead didn’t look like a marble on the barrel’s end.

We shot — my son, his friends, and me — for over two hours. Sure, my accuracy was a constant ebb and flow, but I loved the shotgun’s functionality and how fun it was to shoot. I get it; wing shooting is serious business, but at the end of the day, you have to enjoy and have maximum confidence in your weapon. I found both in Benelli’s new make. 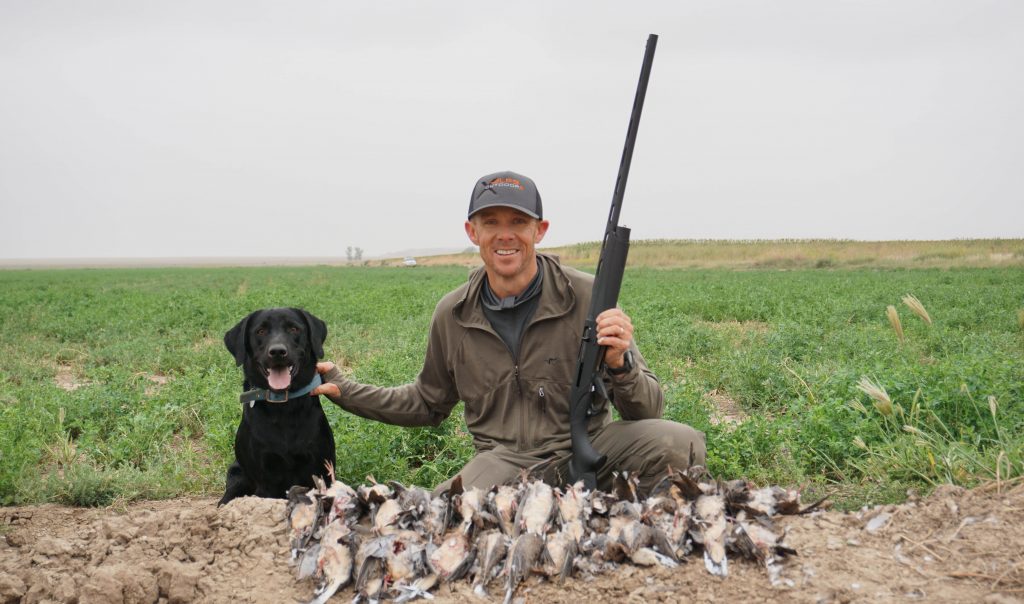 The boys and I shot doves for two days, which is one thing that makes dove hunting tremendous and something you should keep in mind. If you can locate an excellent flyway, which will typically be between roost trees and a food source, you can be in for hours of non-stop action. Small ponds where doves can slake their thirst also make for excellent dove shoots. Plus, doves are plentiful in many states, and the limits are liberal. For instance, the one-person dove limit in Colorado is 15 birds. The boys and I shot 40 between four of us that first day, and then that night, we made dove poppers (two dove breasts, cream cheese, jalapeno peppers, bacon, grill). With the meat consumed, we could return the second day, shoot several more, and not be over our legal possession limit.

Dove hunting is a great way to get youngsters involved and excited about hunting. Not only is the action usually fast, but because dove hunting is so action-packed and ever-changing, you get a chance to mentor young shooters about firearms and proper in-the-field safety.

The best part was that second day; I hunted with my camera. The boys became 28-gauge fans, and I smiled and watched as they took turns with the Benelli. Some of the quotes from that day, and I have them because of the video I took, included:

Those are but a few. If you’re looking for a new sub-gauge partner, pick one designed around excellent ergonomics and top-tier functionality. Pick Benelli’s Super Black Eagle 3 28-Gauge. 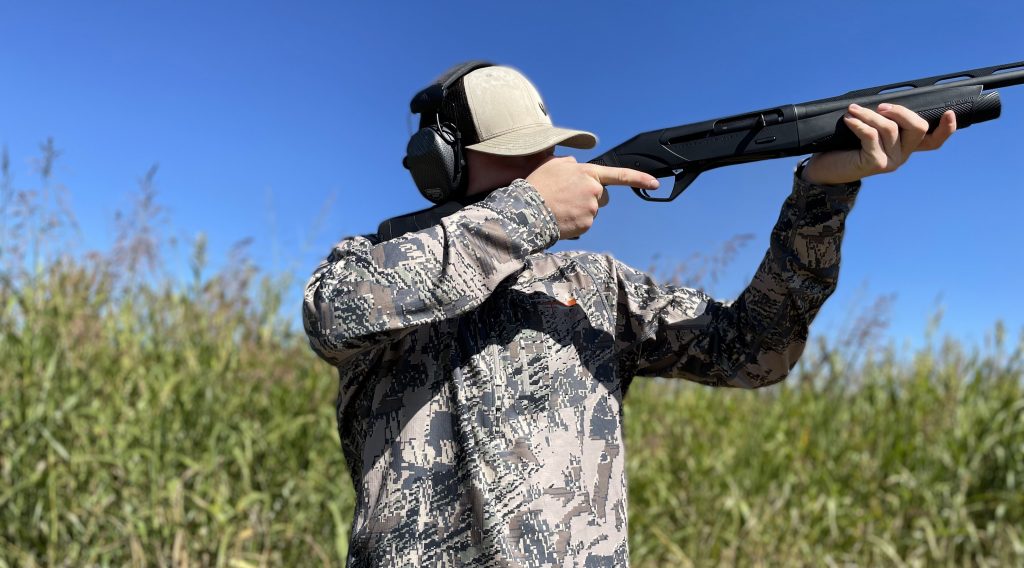