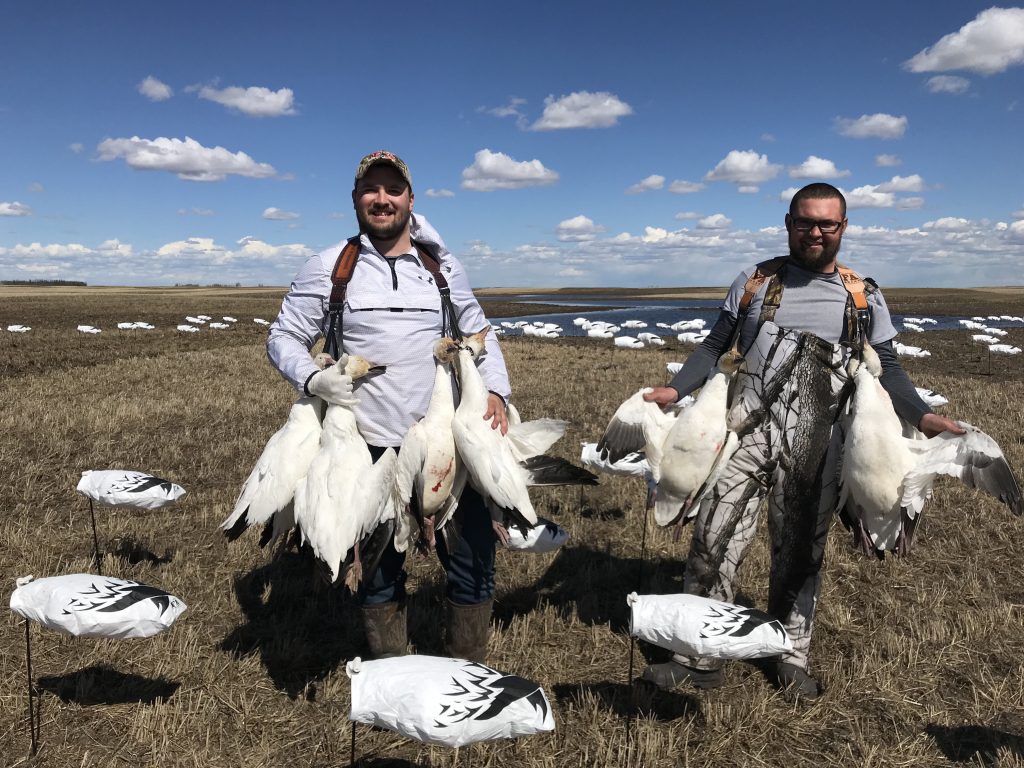 The sun was high in the southern sky, burning like a signal flare across our decoys. The white socks waddled in the wind, like snow geese trying to outwalk each other to the next morsel of grain. I could feel my face turning red, as the wind and sun began to take a toll on my white winter skin. We had been watching several large flights of birds working back to the south in their daily routine of bouncing between fields. A flight of close to 300 birds winged across the section south of us, and I turned up the volume on the electronic caller in the hopes of drawing their attention. It worked.

The mass of birds swung back north, and I barked like a sergeant major at my hunting buddies to get their heads down and stay low. The geese were swinging over the top of us in no time, and you could see the adult birds working their necks back and forth with scrutiny to check out their compadres on the ground. I held my breath that they would give us another look, and after the flock was a couple of hundred metres past us, they swirled back to the south. The flock lined up on our decoys and dropped in elevation as they winged closer. The sound of 300 excited geese was deafening, and as they passed over at about 50 metres, I was tempted to call the shot, but didn’t. The birds made another big swing to the south and centred on our spread of 1,000 Final Approach snow goose socks once again. This time, the birds quickly whiffled and dropped in elevation. You could sense the excitement amongst the birds, and I could feel my heart rate sore. The leading edge of the flock was soon dropping out of the sky with backpedaling wings, as several birds landed around us. When the largest mass of birds was less than 20 metres off the ground and directly in front of us, I yelled: “take them”!

Shotguns roared and nine geese fell from the flock as the rest flew for safer air space in a matter of seconds. It was one of those magical moments any avid waterfowler waits for all season. To make things even more perfect, it was a spring hunt this April, and almost all the birds were adults, after poor recruitment in the central arctic last year.

We shot 36 white geese that morning and considered the event to be a huge success. I was hunting with good friends Mario Frendy, Josh Luedtke, and Tim Despins. To shoot more than eight birds each on a spring hunt was awesome. Lots of people judge success with limits, but with a 50-bird allowance, and no possession quota, limits are not always the best measuring tool.

We are extremely lucky to enjoy spring seasons for any waterfowl. My dad never grew up or experienced a time when he could exercise his favourite smoothbore in the spring. Snow geese regularly get little respect from some hunters who use derogatory terms, like “white devil”, “sky carp”, “tundra munchers” or cuss even worse words. To make matters worse, hunters are often heard saying snow geese are inedible or taste terrible. Nothing could be farther from the truth.

Unless we skip back to the time when market hunting was legal, there has never been a more liberal opportunity to harvest geese in North America. We should be singing praises for our white arctic friends, who bless us with an opportunity like never before.

We are endowed with high limits, and a fall and spring season for white geese, to conserve the bird and the habitat they require. Some hunters take the conservation season a little too far, and once again denigrate the bird that is providing the opportunity and an excellent source of protein.

When I think of speckle-bellied geese, I equate hunter attitudes and comments to positive things, like “best eating bird ever”, or “ribeye of the sky”, or “ultimate trophy goose”. People refer to specks with love, respect, and honour. It is ironic that specks are limited on how many a hunter can harvest yet garner more respect. Both species are arctic nesting birds that feed on similar vegetation. A blindfold test at the table has revealed, on many occasions, that hunters cannot distinguish the difference between snow geese and specklebellies when prepared the same way, and properly. Now, don’t take this the wrong way, as specks deserve the love and admiration they receive, but how is it that their white cousins are scorned and cursed when they have so much to offer?

We had started our spring snow goose hunt setting our decoys an hour before legal light. We wore white and hid in the spread, to be at one with the decoys. Shortly after legal light, we had several pairs and small groups decoy extremely well. We shot birds consistently all morning until we had the big mob of 300 work like we were living in a dream. By early afternoon the wind had picked up, and the decoys were making noise and moving erratically, so we decided to call it a day. Birds were still passing over the field when we left, but we already had plans to be out again in two days.

Our next outing was very similar to the first, and we had 32 birds to take home at the end of the hunt. One of the most spectacular parts of the morning was watching thousands of geese take flight shortly after the sun came up. They came from three different directions and filled the sky. We never fired a shot, and I would have likely blown a gasket if one of my buddies had disrupted the event by shooting. The goal was to let the birds go out peacefully, and hopefully, have some return over the day as we continued our hunt. The strategy did work, and we had singles, pairs, and groups of four to ten birds come back to work our decoys. If we had shot at the mass of birds early, chances are we would have seen few, if any, return for a second look.

We planned another outing the following morning, as it was easy to track where the mobs of snow geese were feeding around us. Hunting spring birds can be frustrating, but by paying attention to what the birds are telling you, consistent shooting can be the norm.

Snow geese will bounce between many fields in one day. The fields with good feed, like residual barley, will get hit daily. We spotted many fields but picked the ones the birds were likely to return to enjoy good eats. Our plan worked, and although we didn’t shoot our limit of 200 birds, we had an unbelievable adventure and enjoyed the virtues of waterfowl hunting with friends.

The last morning, we set up with decoys running to two wetlands created by melting snow. The sheet water is a favourite hangout for white geese during the day, and it often works to help decoy birds. We had birds work our decoys early and shot several geese at less than 20 metres. We saw the mobs and enjoyed another morning of the sun on our faces. This fantastic ending to a week of spring snow goose hunting left me wanting to do more and was a reminder of how snow geese are underrated by some hunters.

Take pride in the fact you’re a waterfowl hunter. Rejoice in the fact that we have snow geese in such abundance that we can hunt them for six months a year and never be concerned with how many we legally have in our freezer. Take pride in the fact you can hunt and call it conservation. The sad truth is, snow goose numbers could decline drastically, and hunters would then be forced to limit seasons and harvest. I say we hold our glasses high and toast the beauty and outstanding opportunities the white arctic geese provide to hunters. Cheers to snow geese!