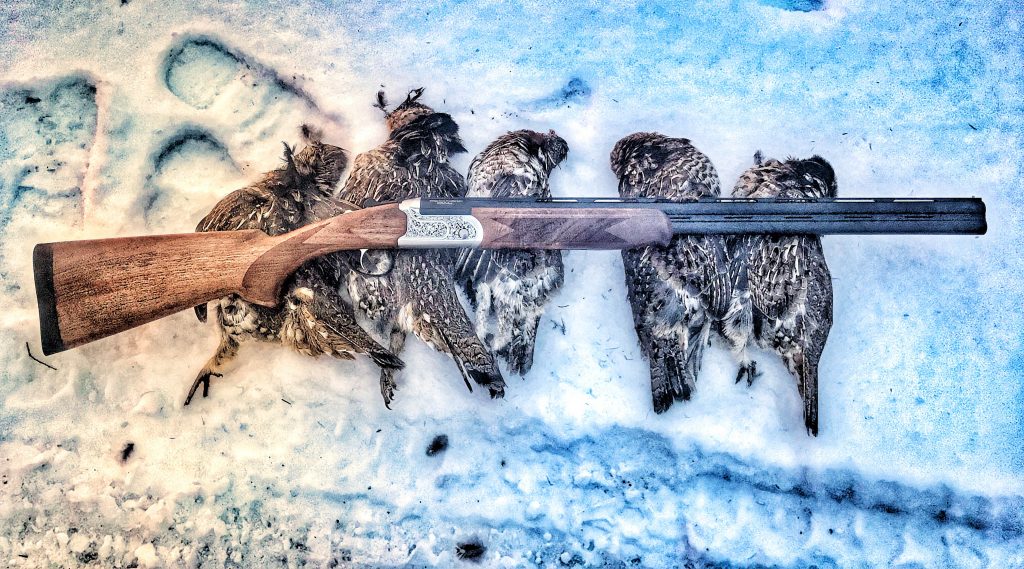 I started my hunting career with ruffed grouse and fondly remember my dad passing me his trusty double-barreled shotgun to collect my first bird. I was hooked from the first blast.

Ruffed grouse have always stood out as a family favourite, and many a Saturday was spent searching the boreal forest for our feather-footed friends. It shouldn’t come as a surprise that grouse have always been a priority, as many old black-and-white photographs are of my grandpa and dad with a string of grouse presented between aspen trees.

Ever since I can remember, Partridge Pie has been a coveted dish, measured with the number of bush partridge, or ruffed grouse that could be brought home over the season. It takes a minimum of three ruffies to make a good batch of this chicken-like stew. If we were fortunate to bag a dozen birds, dad would exclaim, “we have four partridge pies for this winter”.

The simple math of harvesting birds was brought up on a recent ruffed grouse hunt as we headed for big timber country. My grandma was the creator of Partridge Pie, and it has been a family favourite passed down now through four generations. Dad looked at me as we headed down the highway and said, “I sure hope we get enough birds today for a couple of partridge pies”.

I just grinned and told him we would have fun no matter how many birds we brought home. It is always a pleasure to get into ruffed grouse habitat, as you never know what you’ll see or experience.

It was late morning when we finally pulled off the hardtop and headed down some ice-covered gravel roads. A blanket of snow covered the forest floor, making it tougher to find birds. One would think the white background would make the birds stick out like a sore thumb, but the truth of it is that the grouse head for heavy thermal cover for the winter, making them a challenge to locate. 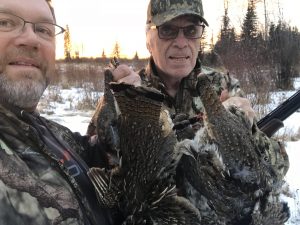 I hedged our bets and headed to some areas with dense spruce forest. I’ve found that ruffies prefer the small, dense stands of white spruce, close to alder and aspen. Often these forests are impenetrable walls of cover but with a little luck a few birds can usually be sorted out. I also wanted to target areas with south facing exposures, where grouse could still get their feet on patches of dry ground. My strategies have worked well for late-season birds in the past.

We were driving into the heart of grouse country when I hit the brakes, backed up, and pointed to a ruffed grouse perched high in an alder tree eating buds. It was likely dumb luck that I even spotted the bird, but dad was out and stalking to within shotgun distance before I knew it. Unfortunately, when the 20-gauge barked the bird took off flying without a single feather being touched.

I had bought a new Savage Model 555 over and under in 20 gauge and had promised dad he could help break it in on some birds. We stopped in an opening and patterned the shotgun to ensure any future grouse sightings would result in birds for the game bag. Dad had used an old Stevens 20-gauge side-by-side shotgun for years and was used to taking a fine bead to shoot a pattern on the target; the new gun required looking at the whole bead on the shotgun to be on target. Our efforts to get out early and not pattern the gun helped educate birds for future production, but it was now time to get serious.

Checking out a south facing ridge, I spotted a single grouse standing in a patch of grass where the snow was burned off. As we closed the distance, the bird ran for cover, joined by a companion we hadn’t seen. Stalking into the forest, bobbing heads drew a bead and when the shotgun barked you could hear the thunder of the last wingbeats. Seconds later another shot echoed through the trees and we were officially on the scoreboard with two dandy ruffed grouse.

The next bird we found was also on a patch of dry grass, perched at the bottom of a birch tree. The sun had melted the snow, making a perfect day roost to soak up some winter sun. When dad fired the shotgun, the grouse didn’t stand a chance, as a third bird meant partridge pie. However, at the report of the 555, a second grouse headed for heavy cover like a roadrunner on steroids. The shotgun barked again, and two of our fine-feathered friends were carried back to the truck.

We spotted another bird sitting between small spruce trees trying to stay warm. It was puffed up with feathers making it look about twice the normal size. Dad had shotshells in the gun and worked within range to add a fifth bird to the bag for the day.

Overall, we enjoyed a productive afternoon of grouse hunting. We even had a few more birds tease us by flying across the road to find a perch for the night. At the end of the day, we had one limit of birds, which is just shy of the requirements for two pies.

The usual definition of pi is the ratio of the circumference of a circle to its diameter so that the circumference of a circle is pi times the diameter and the area of a circle is pi times the radius squared. In the Fenson family, pi stands for pie and RG for ruffed grouse, and in the case of our last hunt, we bagged enough birds for two pies. In geometric terms, our harvest was π RG², or enough grouse to make two partridge pies, or two square meals.

We may have been a bird short for two pies, but I salvaged all the legs and thighs off the birds to ensure we’d have enough grouse to complete two family meals. It may be a twist on a family tradition, but where there’s a will there’s a way, and I was going to make sure we had enough birds to make grandma’s old recipe at least twice over the winter. With any luck, we’ll get out one more time to put a few more birds in the freezer for an increased π count. 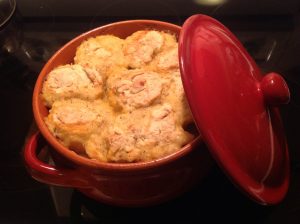 Place above ingredients in a stock pot and cover with water. Bring to a boil and allow to simmer for 45 minutes.

Pull out grouse breasts, remove the meat from the breastbone and cube it. Use a colander or strainer to remove vegetables and spice from the prepared stock. Discard vegetables and put clear stock into a pot.

3 to 4 potatoes, peeled and cubed 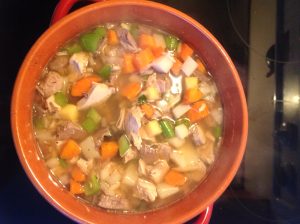 Take 1 cup of stock and set aside for thickening stew with cornstarch.

Bring remaining stock to a boil and add the onion, celery, carrots, potatoes, and frozen peas. Simmer for 5 minutes with a lid on the pot. Vegetables will still be firm. Add cubed grouse meat and blend into the existing stew. Bring contents back to a boil and thicken the entire mixture with cornstarch and the cup of stock set aside earlier (blend starch and stock by whisking with a fork then slowly add to the stew). Continue to stir until mixture thickens then remove from heat.

Pour the contents of the stew into a casserole dish. Top the stew with baking powder biscuits cut about a ¾-inch thick. Place in oven and bake at 375°F for 20-25 minutes or until biscuits are golden brown.

If you choose not to add the baking powder biscuits, you can simply put a lid on the dish and bake for 20 minutes.