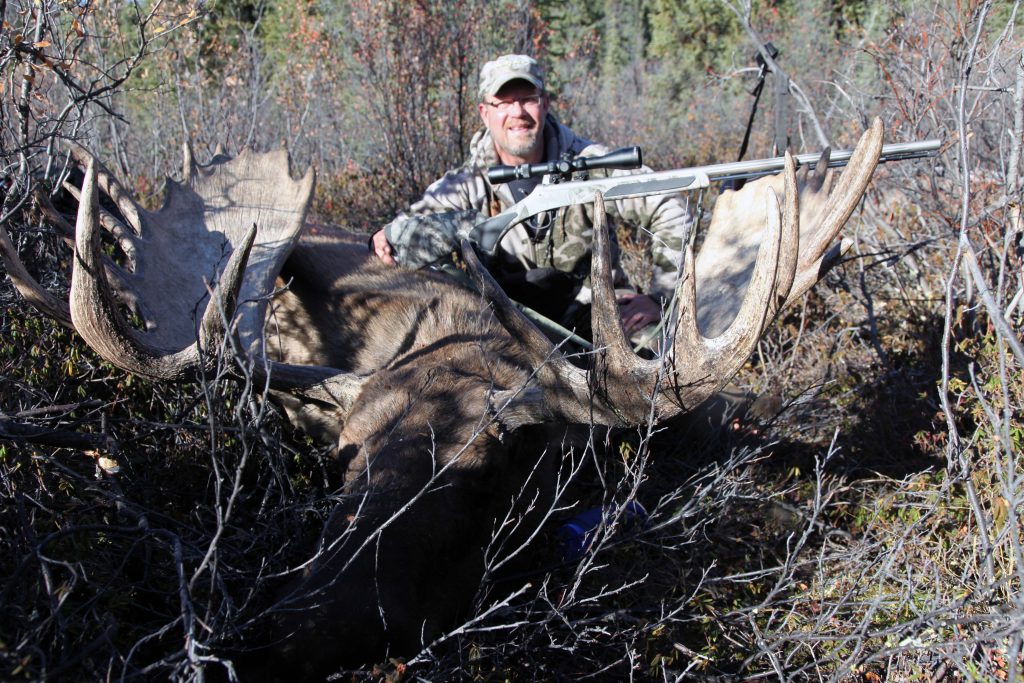 The thundering beats of the spinning propeller on our Beaver aircraft echoed inside my head as we motored across the lake for takeoff. I watched the wake from the floats turn into a spray that slowly dissipated until we were airborne and headed for a week long adventure in the Yukon wilderness.

I had been planning the trip for over a year with my good Yukon buddies Larry, Tami and Lloyd. We would require two flights to get all of our camping equipment, inflatable boat, and food to our destination. We had planned carefully and after talking to several people knowledgeable about the area we picked a secluded, high alpine lake to hunt for moose and mountain caribou.

The flight in was breathtaking and as we flew down the river valley, I spotted a herd of Stone sheep on a steep break. I knew we were headed into some truly wild country. It would be a half hour flight to the lake, taking us over several mountains and through river valleys strewn with game trails. Our pilot eventually pointed out a lake nestled between two mountains in the distance and let us know we’d have to pick a drop off point to set up our camp. We circled the shoreline trying to determine if we had flat ground for the tents and spot the long shoreline for animals. I tried to take mental notes of the habitat below and the willow choked draws running through the valleys along the lake. Minutes later the floats of the plane broke the calm surface of the lake and we motored up on a sandy shoreline to unload our gear.

Larry and I went to work setting up camp and organizing gear before our hunting partners arrived with the remainder of supplies. I couldn’t help but look up and check the shorelines for activity and spotted four caribou walking along the lake directly across from camp. It was a good sign we’d picked the right spot to hunt. It was unseasonably warm but we enjoyed the heat of the sun while preparing for the week ahead. We weren’t the first hunters to set up on the point of land and took advantage of a shelter built in the trees to set up our kitchen and cook stove.

We woke early the next morning, and after a quick breakfast headed to a hill overlooking a long valley to start our hunt. We pulled our inflatable boat into the quiet bay and gently made our way up to get a view of the creek and valley winding its way down the mountain. Larry wasted little time calling like a lovesick cow moose looking for a bull, while I found a flat piece of ground to sit and watch, getting comfortable and waiting for a response.

I had trekked to the Yukon in search of a big Alaska/Yukon moose. Yukon residents can obtain a special permit to guide a resident of Canada once every three years. Larry and I have been taking advantage of the unique opportunity for the last two decades and although I’d taken moose, I still hadn’t set my sights on one of those large-antlered northern bulls that most hunters dream of. From the intelligence we had acquired for the trip, we were on a lake known for big bulls.

We watched the clock carefully and called every 20 minutes hoping to hear a bull announce his intentions with deep guttural grunts. The hours ticked by and we sat focused knowing a bull could show up at any minute. The sun made its way across the sky and when it started to fall on the western horizon, we decided it was time to head back to camp. We called for a solid 10 hours, leaving Larry a little hoarse, but heard no reply.

Moose hunting can often be the most boring thing a hunter could do. I picked blueberries and cranberries to help pass the time. Our second full day of hunting was a repeat of the first and although the bulls weren’t responding we knew the rut would kick in any day.

Tami and Lloyd were hunting the far end of the lake and although there was lots of fresh sign, they hadn’t laid eyes on a moose either.  With two boats we could head to different parts of the lake and try our luck at calling.

Day three was another uneventful attempt at calling in a bull. My backside was getting sore from sitting on the ridge but I knew if I was going to get a moose I had to grin and bear it. We got to the shore early on the fourth morning and wasted little time calling in hopes of getting an immediate response. High on the mountain, we could hear a bull grunt his disapproval of our presence. The bull was far up the ridge and every time we called he came a little closer. It took about an hour for the bull to close the distance and eventually held up in the thick conifer cover a couple hundred meters away. Larry loves calling moose and found a heavy diameter stick to thrash the trees like a rival bull protecting his turf. He pounded and scraped the buck brush, while grunting to challenge the bull to a fight. The woods fell silent and we didn’t know if the bull was trying to sneak in on us or just hold his ground.  We decided to walk up on a ridge to keep the wind in our favor and get a better view of the valley. We couldn’t help but make noise hiking through the brush and before we reached our destination the bull grunted again stopping us in our tracks. He sounded close and we turned to look across the valley, spotting a huge set of antlers glowing amidst the conifers in the morning sun.

The bull obviously heard us walking in the thick cover and came to investigate. We crouched to use the cover of the stunted brush and Larry went to work thrashing the trees again. I pulled my range finder out of my pocket and zeroed the bull at 202 meters, but before I could even lift my rifle, he started making his way towards us. He disappeared into the steep valley and I motioned to Larry to move back down the ridge to keep the wind from taking our scent to the approaching bull.

The bull grunted with each advancing step letting us know exactly where he was. Four days of complete boredom had turned into an adrenaline rush of excitement. I brought my Traditions Vortek LDR muzzleloader on the hunt and although I could have made the shot when the bull was across the valley I was happy he was closing in.

The bull’s antlers appeared above the brush as he advanced up the hill towards us. He was grunting and drooling, and his eyes were bulged, looking like he was going to lose his temper. Larry’s eyes looked similar to the bull’s as he watched the immense antlers come closer with each passing second. The bull was coming straight for us and I was hoping he’d turn broadside to offer a better shot.  Larry wanted me to move over to take the shot before the bull got down wind of us so I slowly stood from behind the cover of a fir tree to obtain a full view of the massive black body under the towering antlers. The bull was just 60 meters away and I swore I could feel the vibrations from his deep grunts every time he opened his mouth. The bull stared at us with discontent, licking the snot from his nose with bristled anger. The bull got very rigid and took a few short steps making him look like his knees were locked.  He was quartering towards me and finally took a step so I could see his vitals. My crosshair was locked just behind the shoulder and I slowly tightened up on the trigger until I felt the recoil of the gun. A thick cloud of grey smoke belched from my barrel followed by the resounding smack of the bullet finding its mark. The bull tip-toed behind some small fir trees and I preformed the quickest reload I’ve ever done. I wasn’t taking any chances and placed a second shot into the bull that sent him crashing to the ground.

Larry and I whooped and hollered while jumping up and down with excitement. Two decades of hunting for my big Alaska/Yukon moose was now a dream come true.

Sticking to our plan of calling and showing patience had paid off with the biggest set of moose antlers I’d ever taken. The bull was gargantuan with a hulking body that left me staring at the downed monster in disbelief.  We were about 350 meters from the lakeshore and although it didn’t seem far, it was still going to be a significant amount of work to get the huge moose back to the boat. I checked my watch and had downed eh bull at 11:30 a.m. and with the warm temperatures we’d have to work fast to bone out the meat and get our prized possession back to camp.

We worked together to skin and disassemble the first half of the moose before I went to work packing our winter larder back to the lake. I started filling the backpack and taking trips to the shoreline where I could keep it in the shade to cool. Larry continued to work on boning the bull and in a little over five hours we finally had the job done. Yukon law dictates you can’t take the antlers out until all the meat is retrieved so the last pack of the day was the head and antlers, weighing close to 150 pounds. I struggled to get the pack balanced for the hike down the ridge and Larry and I made our way down to the boat one last time. Our freezers would be full for the coming winter and our brains permanently etched with the excitement and fast-paced action of a fulfilling hunt for a monster Alaska/Yukon moose.