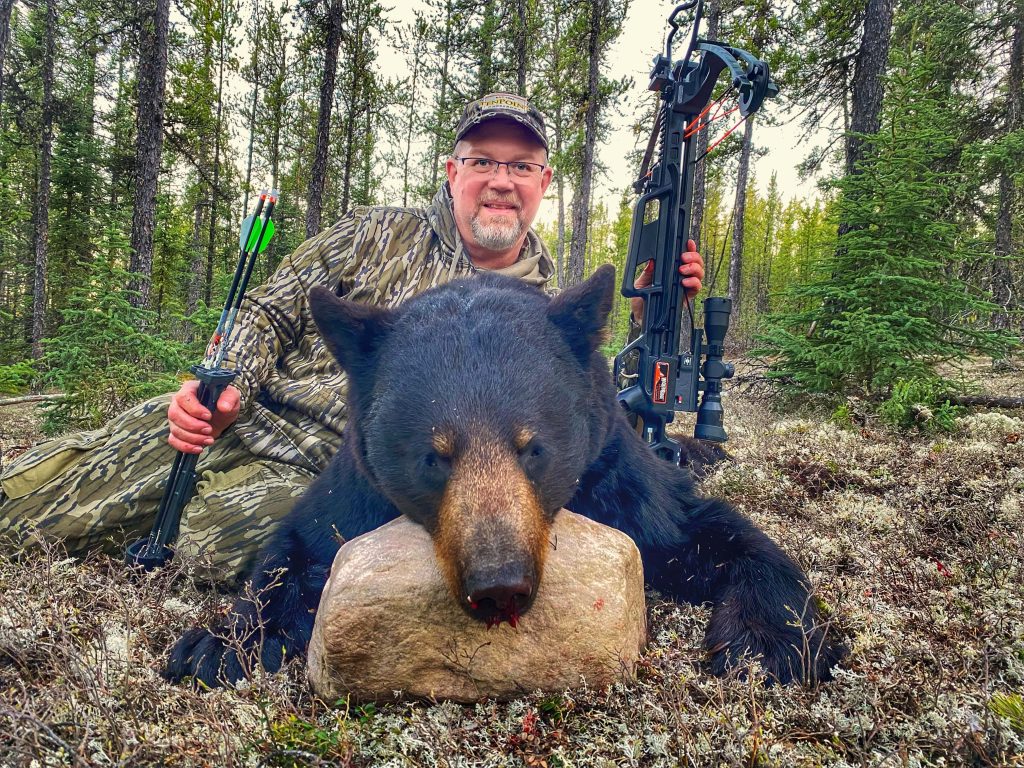 The deep, rhythmic thumping of the propeller on the floatplane kept perfect time with the rapid heart rate in my chest generated by a remote adventure. The northern reaches of Saskatchewan are a playground for hunters and anglers, and heading to Theriau Lake with Big Spruce Outfitters was the definition of adventure. The multiple plane rides crescendo was water cascading off the plane’s floats as we turned to idle to the dock in front of the lodge. We were met by Mark Belchamber and guide Mike Ma to start a week of black bear hunting and fishing for northern pike and lake trout. 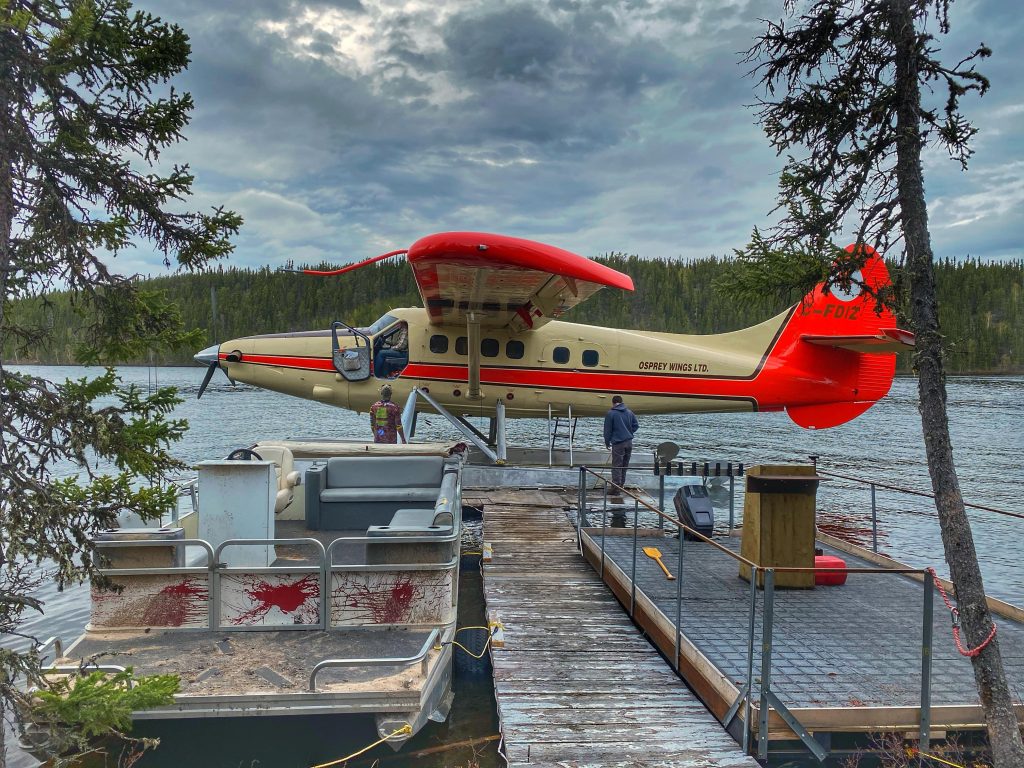 The last couple of years has been strange in many ways. Ours was one of the first flights into the lake in two years. Spring was much later than expected, and we were not sure if the ice would be off the lake in time to fly. With luck on our side, the ice went out the day before our flight. 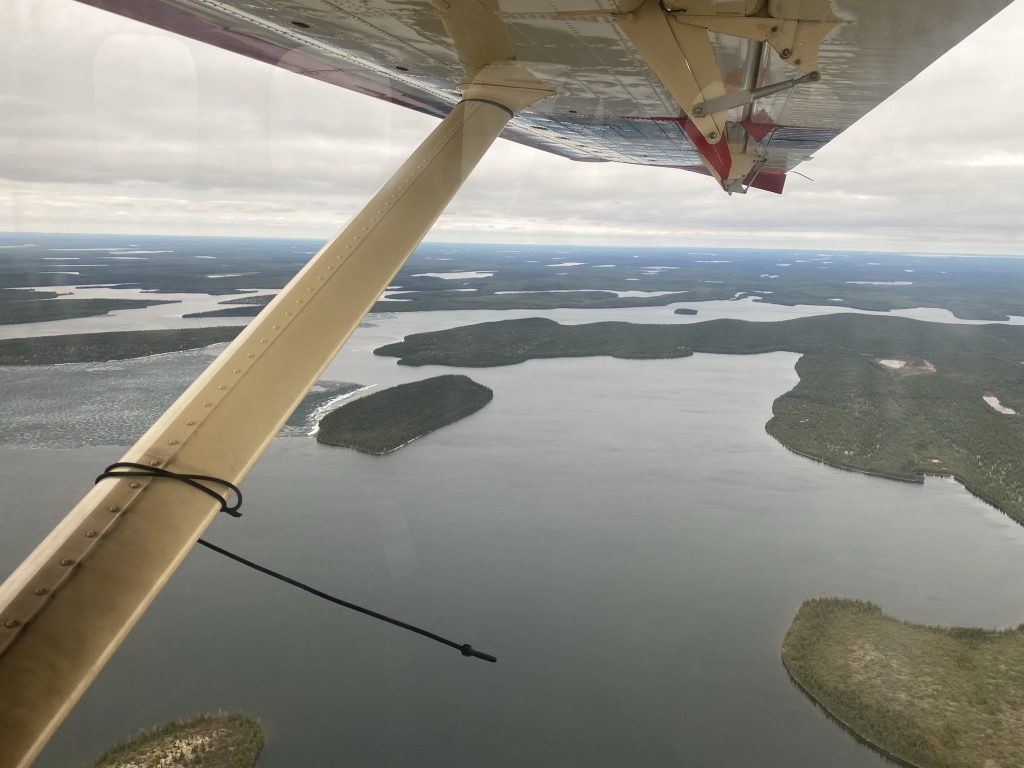 We headed to Theriau the second week of June, a prime black bear rut. The bruins had only been out for a few weeks and some only days. Everything lined up to have the perfect storm for fishing and hunting.

Early June in northern Saskatchewan means long days and incredible scenery. The sun shines for over 21 hours a day, providing plenty of hours to play outdoors. The lodge is situated on an island far from any civilization. We walked into the lodge to the wafting smells of fresh bread. Mark had just baked six new loaves lined up on the counter to cool. It didn’t take us long to find a room, unpack our gear, and head for the lake to wet a line. The lake trout were scattered throughout the lake with the cold temperatures, and the northern pike were starting to warm up and get more aggressive.

I shot my Blackhawk 360 crossbow to confirm it was dialed in for the evening hunt. Others in camp shot guns and bows to prepare for their adventures. Mark had used a quad and then walked across the lake the previous week and had hunting sites ready to go. 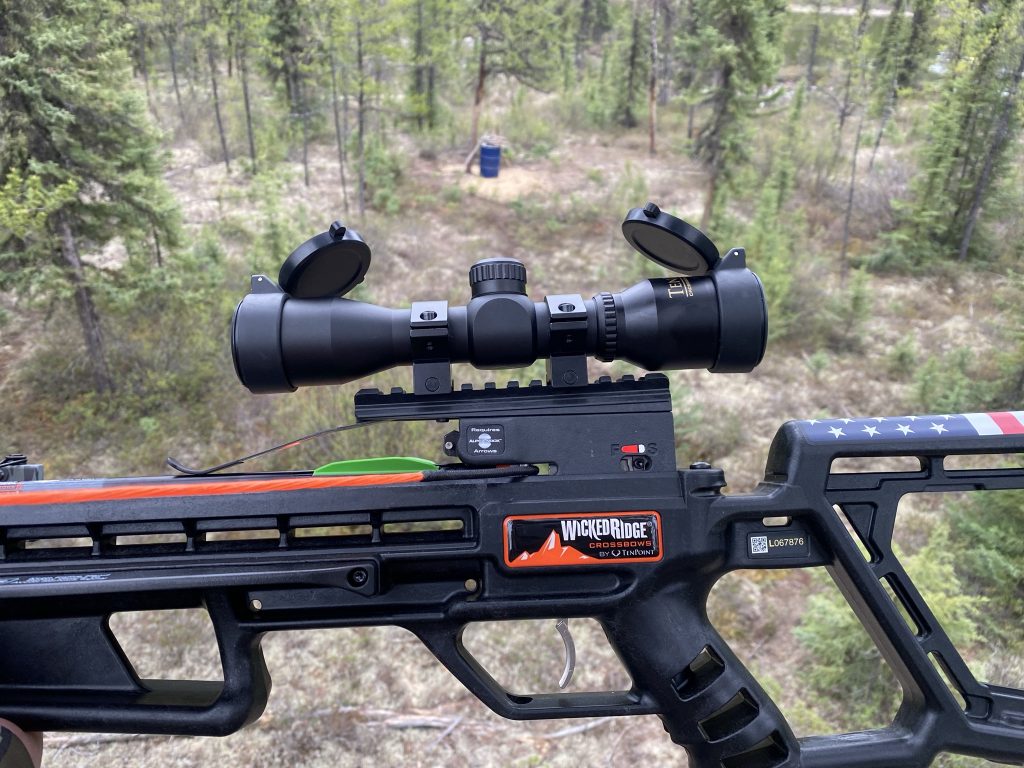 We hunted that evening, and boating across the lake and up one of the long arms was refreshing. Cold temperatures off the water were transmitted through the aluminum boat and in the breeze that came off the surface. It felt like spring.

We edged the boat to shore, and I clambered up the trail to a tree stand with a magnificent view. Boreal forest, migrating birds, grouse drumming, and fishing rising on the lake’s surface were inspiring. I hung a wick with some Wildlife Research Center Ultimate Bear Lure and fired up a Thermacell to keep the mosquitoes at bay. Getting up in my stand, I cocked my bow as the boat pulled away to leave me lost in a moment in time. I could feel my soul recharging from the wilderness and fresh air experience. There were no bears the first night, but there was plenty of sign to let me know that the week had lots of excitement ahead. 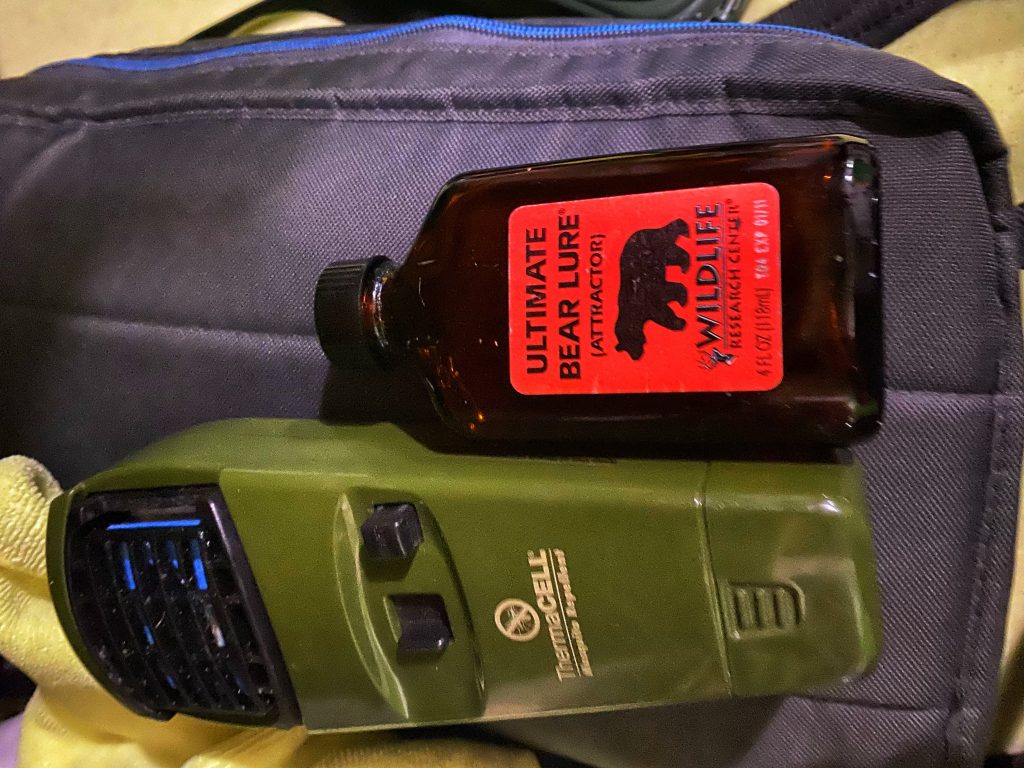 The following day, we were up early and out fishing. Mark took out a pontoon boat to accommodate four anglers at a time. We trolled down the shore and boated dozens of lake trout and pike. It was a great way to start the day, followed by a hot and delicious shore lunch and another evening in the stand.

I was headed back to Red Rock bait, which had trail camera photos of a giant boar courting a mature sow. It was the perfect scenario for an action-packed evening. Bear sign was everywhere, and I got an eerie feeling that the bears were close. Mike dropped me off, and I enjoyed my view and surroundings in solitude.

I prepared my gear for the tree, including backup. Black bears are unpredictable, and carrying a firearm is smart. Loading the right cartridges is even more critical. The Fiocchi Hyperformance line works well from up close to long-range. The selection of high coefficient, flat-trajectory bullets carefully engineered for controlled expansion and maximum weight retention across a broad range of velocities provides hunters the confidence and terminal performance when needed. Let’s face it when staring down a mad or wounded bear, nobody wants to take any chances.

I had sat for less than an hour when I could hear bears running towards me. A sow came less than 10 feet from the stand, followed by a rotund boar. The sow ambled directly to the bait while the boar got a nose full of my scent. He stopped cold, doubled back, and laid down about 20 yards behind my stand. After 20 minutes, I slowly got out my cell phone and reversed the camera to look over my shoulder. I did not move. The boar was bedded and watching his lady friend where he could also keep tabs on me.

After an hour, the sow got up and wandered into the trees. The boar sensed the urgency to get down there to prevent the sow from wandering away. Competition is fierce, and another boar could show up anytime. However, the sow doubled back to the bait, and the boar had a tough decision. Should he start courting his lady friend? Should he sneak around in the cover of the dense forest? Was it safe to make a move into the open?

After pacing back and forth for 15 minutes, the bear finally poked his nose out of the cover. He took a few steps forward and was broadside at 22 yards. I had a close look at the bear at 12 yards and knew it was a shooter. The large boar had a thick hide that glistened in the sun. The black fur had highlights of blue as if the bear had transformed his fall diet of blueberries into highlights on his hair. I wasted no time leveling the crosshair of the Wicked Ridge Blackhawk on the vitals and slowly engaged the trigger. The aluminum XX75 arrow slammed through the bear, and the SEVR broadhead cut clean through the bruin and a 55-gallon steel drum holding grain. The bear kicked all four feet into high gear and ran up the hill parallel to my stand, and disappeared over the ridge. I heard the bear roll over and snap some dry limbs before everything fell silent. The SEVR Robusto made sure the bruin did not go far. 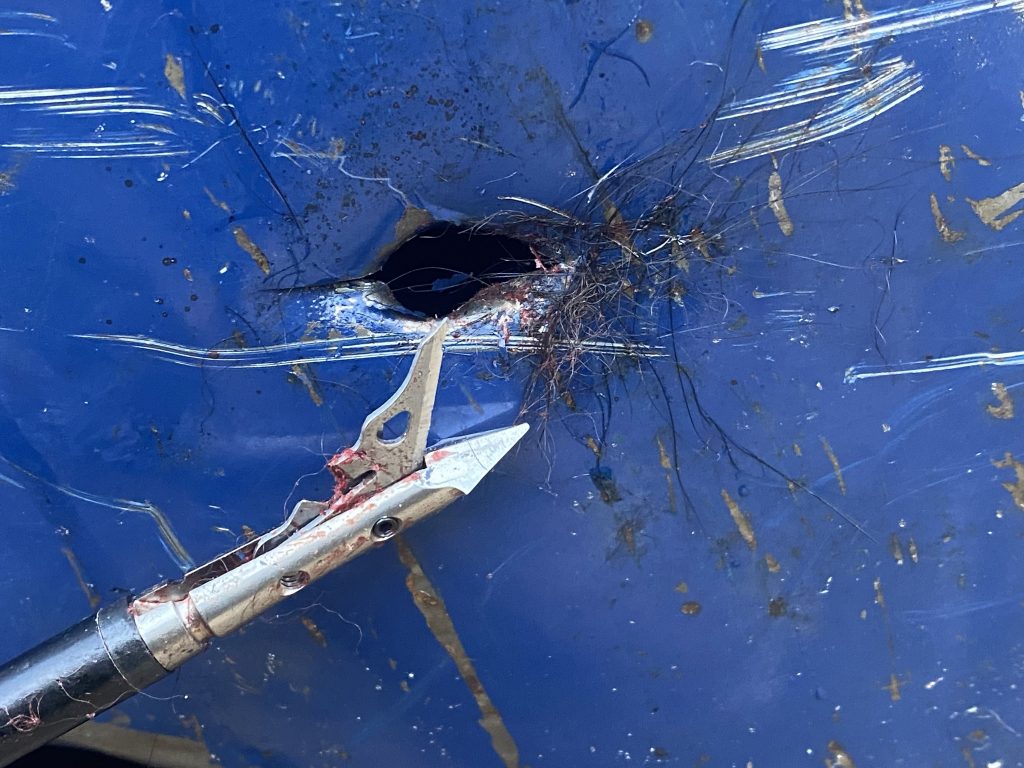 I stayed in the stand and waited for Mike to come at the end of the day. When he edged around the corner of the bay and checked me with binoculars, I gave him a thumbs-up, and he motored over. We followed the blood trail up the ridge and found the boar about 50 yards behind my stand. It was too heavy to move, so we skinned it and backed everything down to the boat. 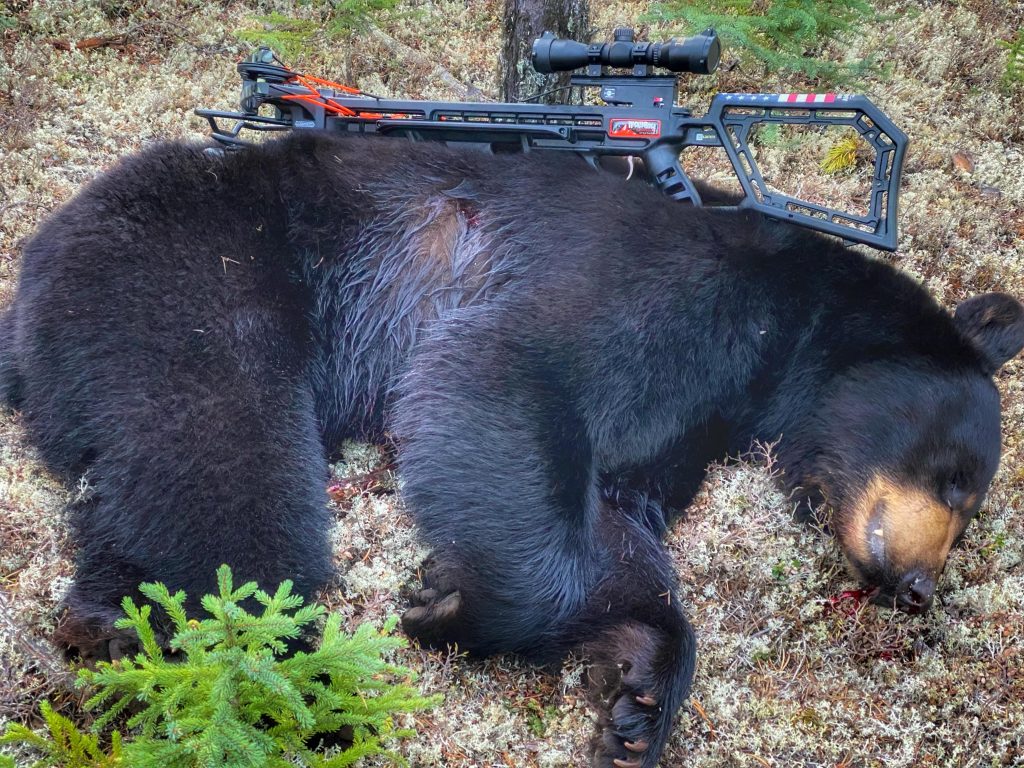 Heading back to camp with a setting sun to our right and the mist of cold water spraying off the boat’s bow was refreshing. We cleaned everything up and got it into the freezer before having a late dinner and drifting off.

We spent the rest of the week fishing off the dock and in different areas of the lake. The weather was outstanding, and catching lunch every day was easy to get used to for shore lunch. It was an extremely successful week with trophy-class bears and a seemingly endless supply of fish. The same floatplane picked us up on the last morning and returned us to civilization. Leaving was bittersweet. Getting home is always nice but leaving the wilderness paradise was difficult. A few more days might have scratched the itch to stay, but I doubt it.

Big Spruce Outfitting and Theriau Lake Lodge offer incredible spring black bear hunts during the rut. Theriau lake is part of an extensive river system with outstanding lake trout, northern pike, and arctic grayling. The rivers are natural travel corridors for bears, and a hunter never knows when the trophy of a lifetime will show up. Please call (306) 813 -7770 or email Mark at bigspruceoutfitting@hotmail.com or check out bigspruceoutfitting.com.

ALPS OutdoorZ specializes in outdoor gear designed and tested by hunters and anglers. The quality is outstanding and will ensure your clothing and gear are always taken care of for those memorable adventures. The little details explain why the company can cover the needs of outdoor enthusiasts looking for packs, duffels, dry bags, and even suitcases. 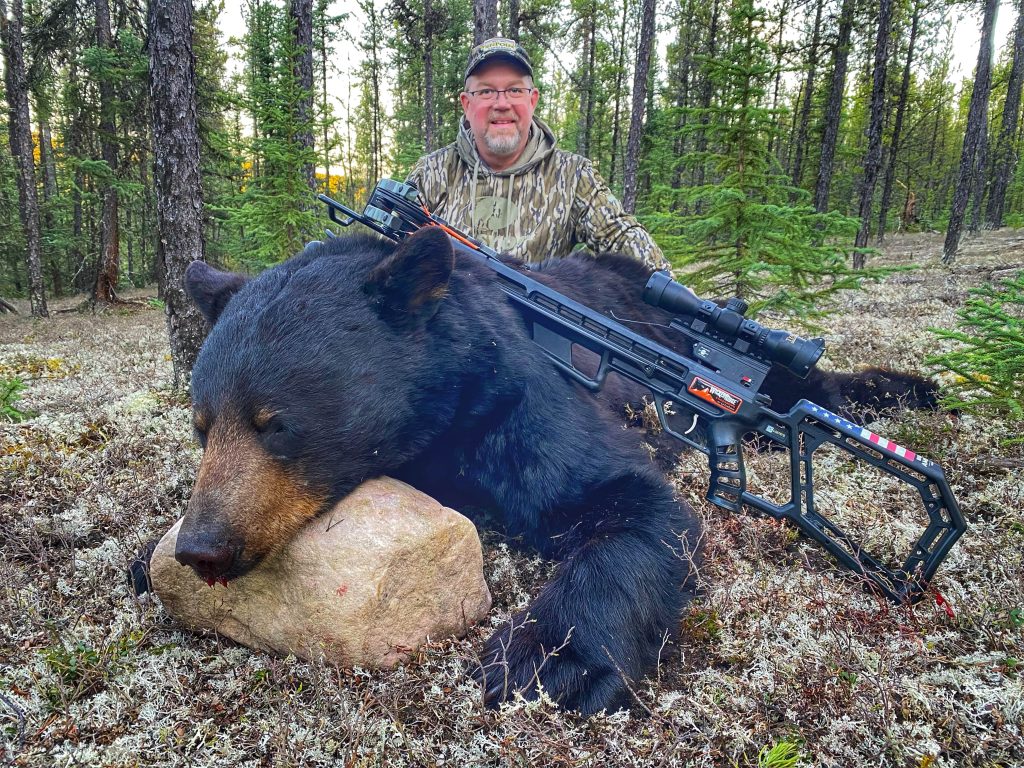 Extreme value with new technology is the best way to describe the Wicked Ridge Blackhawk 360. The forward-draw limbs are 15 inches wide when cocked, and the bow’s total length is 35.5 inches. The bow is lightweight at an even 6 pounds. A power stroke of 13.5 inches generates 350 fps/109 FP KE with a carbon arrow. The bow is skeletonized but features modern components, ready to hunt, including being sighted in at 20 yards. MSRP: $399.099

Tourism Saskatchewan has an excellent online resource for planning a trip, finding an outfitter, knowing the rules and regulations, and providing maps for travel. Go to huntfishsask.com to get started.