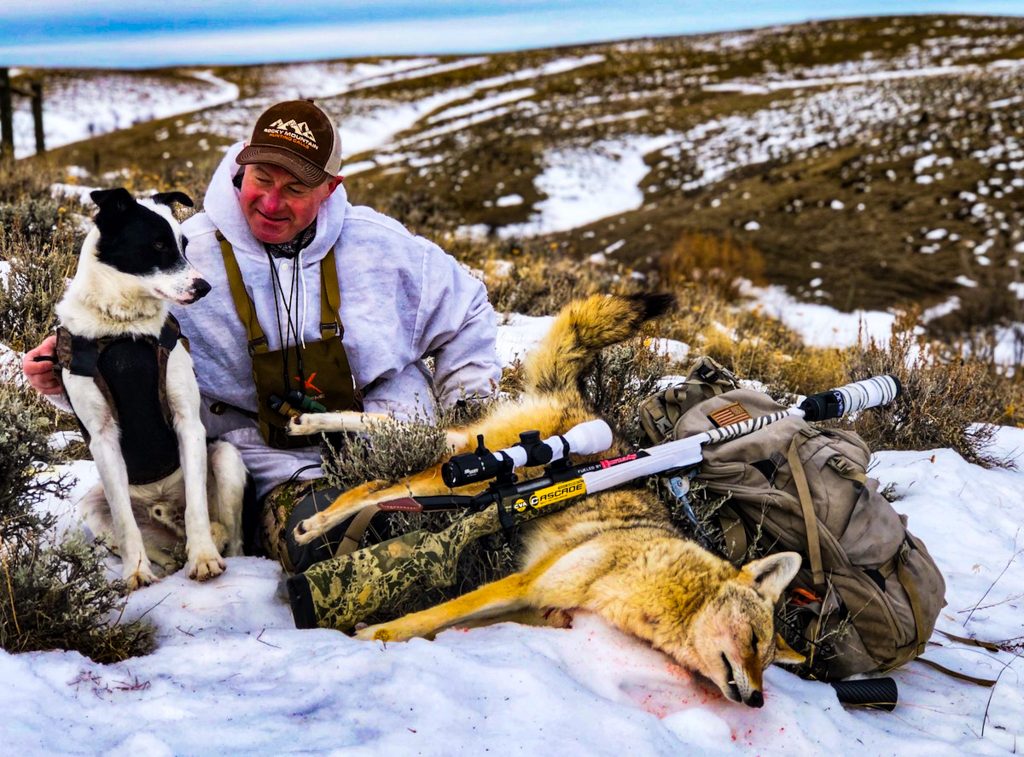 Gear Up For Coyote Breeding Season

If you’re a predator junkie, there’s no better time of year to call coyotes close. As days lengthen and the coyote rut rolls on, male and female dogs are looking for love, and if you heed the tips to come, you’re likely to bring some looking-for-love song dogs on a string.

Every whitetail hunter waits anxiously for the rut, and coyote hunters should follow suit. If you don’t have that Christmas morning anticipation the whitetail crowd does when it comes time for boy yotes to chase the girls, you should. Coyotes rut in a similar fashion as whitetails. Although coyotes pair up and whitetails play the field, the rush to find a mate, cover ground, and defend territory combine to make coyotes more vulnerable late in the winter. Put these coyote rut factors to your advantage.

Coyotes begin their pre-rut transformation in January, transitioning from sibling gangs and packs to pairs. Most coyotes across North America breed in February, making Valentine’s Day a reality for coyotes and humans. As January days lengthen toward February, a change of coyote calling tactics and gear should be your focus. This change is the saving grace you require as pressured coyotes grow suspicious of the standard calling approach used by the masses.

Call of the Coyote Wild

Prey in distress sounds dominate the calling scene, but as the breeding season nears, you should set those aside and consider coyote vocalizations. Coyotes have a wide range of conversations, but if you only master one sound, work on the lone howl. Yips, whines, and the occasional bark also have merit, but a lone howl or the sounds of a pair proclaiming their existence is enough to get a lone coyote or pair to investigate. A lone coyote would approach looking for a mate, and a pair would arrive to investigate trespassers. How do you reproduce those coyote icebreakers? Your predator hunting gear kit likely already includes an electronic caller. Which model you stash in your pack has a lot to do with your budget. Models (www.cabelas.com) starting at $100 and going well above $500 typically have coyote vocalizations in the library. The critical factor to consider in an electronic caller is having a clear speaker transmit the sounds. Various research confirms coyotes can distinguish between individuals.

I still use an older Primos Alpha Dogg when strategy calls for it, but Foxpro, Western Rivers, and ICOtech, to name a few, all offer quality callers. Most include a library of coyote vocalizations. Look for the lone howl, female invitation howl, challenge howl, estrus whines, and playful yips. Another sound to add, mainly as breeding heats up, is the occasional sound of coyotes fighting. This represents a female not ready to breed or coyotes fighting over mating rights. 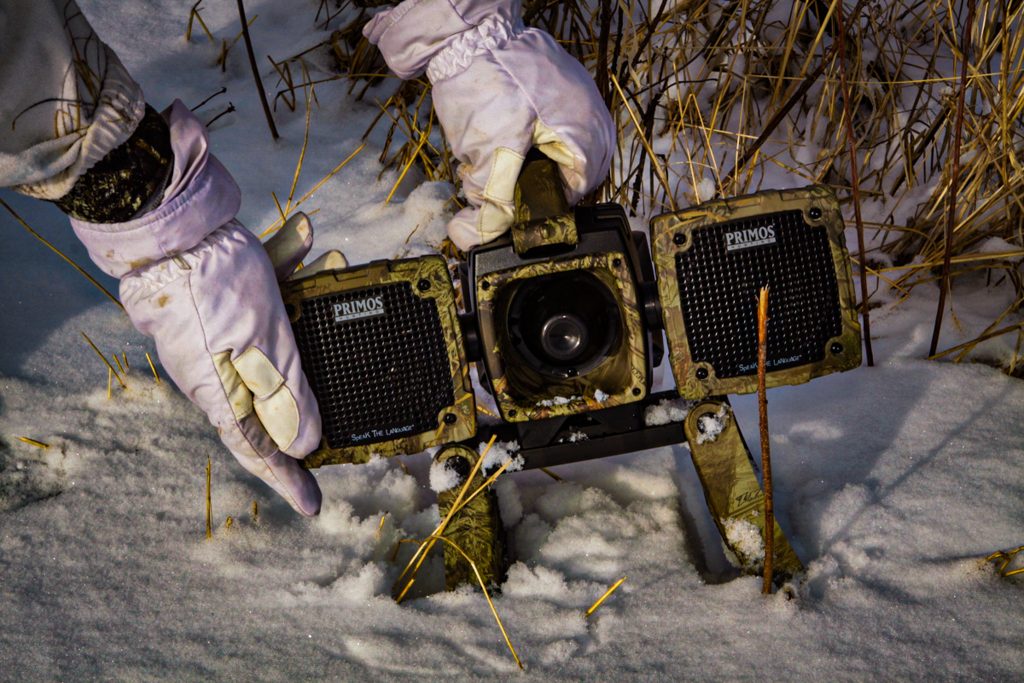 Today, I do most of my howling with my mouth. Rocky Mountain Calls Stealth Yote Howler is a mainstay in my predator pack year-round. This call includes the ingenious coiled spring V.E.T.T. system, situated in the mouth opening, which has been perfected in their elk bugle tubes. It authenticates the bugle tone and also rings accurate notes of a coyote. Instead of using the diaphragm included, I prefer the Black Magic elk diaphragm. It sounds excellent for bugling elk or howl work. If diaphragms gag you, get over it. Or you can use any Rocky Mountain Hunting Calls’ howlers that work with an open-reed format. Look at all the companies to find a howler that appeals to your preference because a howl ripped with lung power sounds more realistic than most electronic versions.

As for howling instruction, I generally wait anywhere from 30 to 60 minutes per setup and if nothing has shown after your initial howls and playful whines, wind up your stand with a short series of lone howls. Wait another 15 minutes, and then move on. Remember, coyotes have a large territory that expands in late winter as they roam for mates, and food becomes harder to find, so it can take longer for a wandering coyote to arrive. 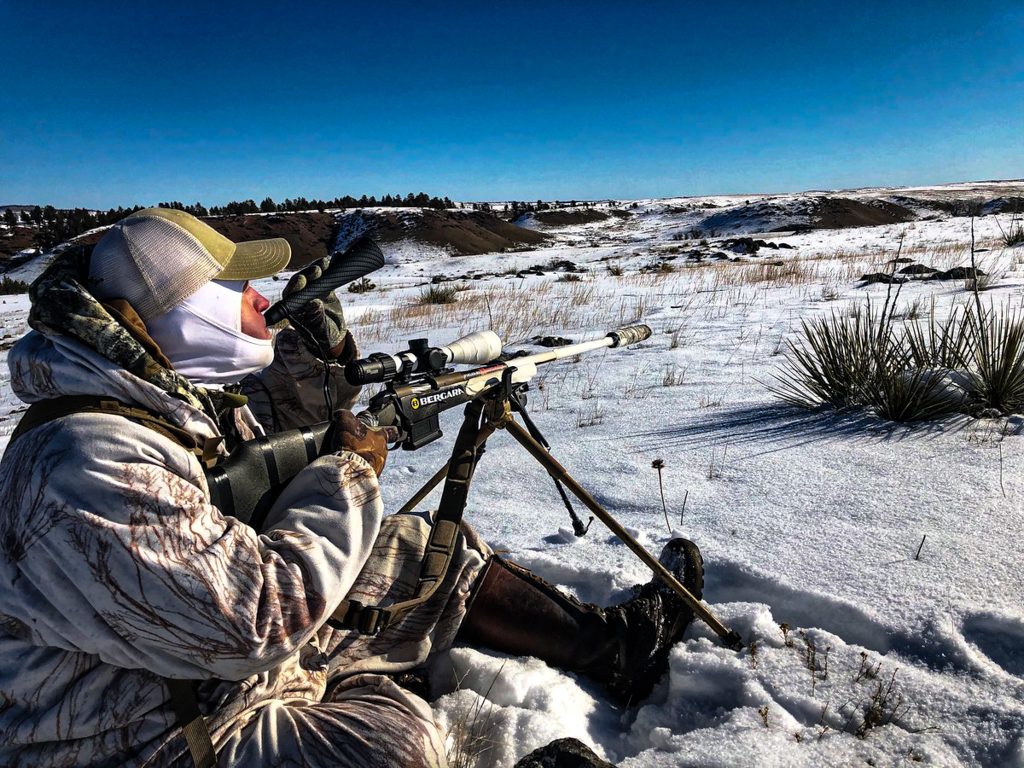 Coyotes have incredible olfactory senses. A review of known olfactory research reveals that humans have approximately 5 million olfactory receptors in their nose, domestic canines have 220 million, and bloodhounds rank higher with around 300 million. Your favorite big game animal, the whitetail deer, also hosts nearly 300 million receptors. Although coyote data evades my research, you can bet a coyote has a whiffer similar to that of a bloodhound.

In addition to the proper scent elimination of you and your hunting gear, utilizing a quality scent could be another rut ploy to consider. Coyotes notoriously circle downwind to confirm the situation with those miraculous receptors. Depending on your calling terrain, a dose of scent could boost coyote confidence further into your setup trap.

The scent advantage is more critical when calling in terrain that restricts vision. First, you can use scent while incorporating an electronic caller. Coyote urine works well as both a cover on your boots and a stop sign placed where you want the shot to take place. Find an opening with an upwind window and set the caller at least 100 yards, probably farther, upwind of where you plan to post up. Place some scent on a bush near the caller and in a straight downwind line back to you. When the coyote circles into the caller, hopefully, it will circle between you and the caller and stop to investigate both scent and sound. Its attention will be directed away from you for an unsuspecting shot. 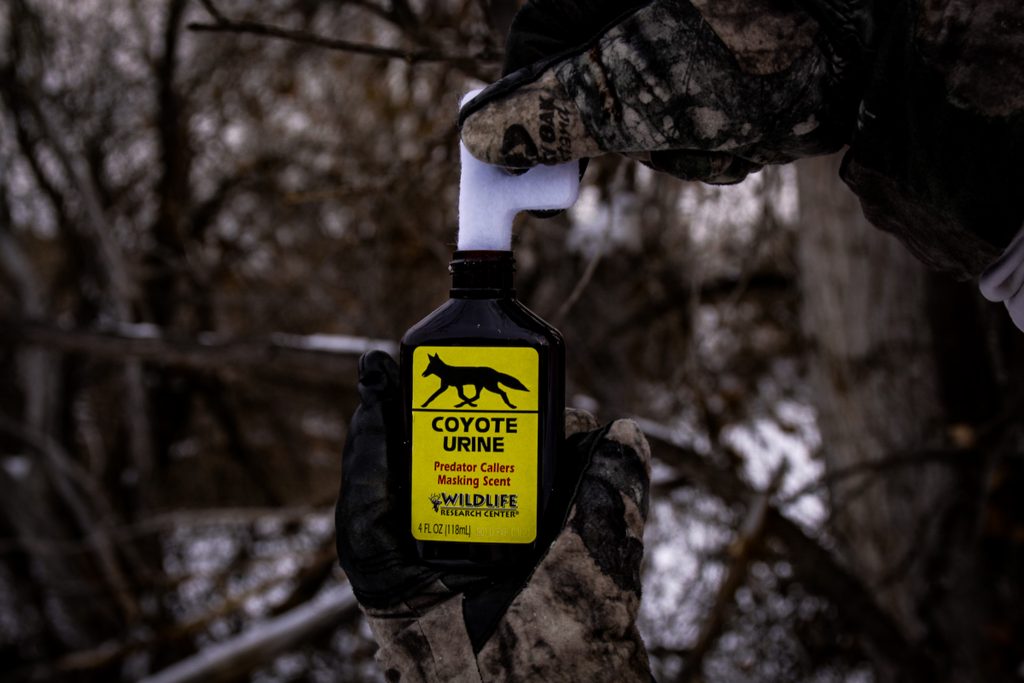 Second, if you prefer to post upwind of your shooting lanes, confirm the wind and look for openings on either side of the wind alley. Place scent there about 100 yards from your position. If a coyote swings downwind from either side, the scent will stop the coyote before it reaches your scent cone, thus giving you a shot at a coyote trying to decipher the maker of the urine.
Using the HuntStand HuntZone wind graphic on my hunting app, it is simple to decipher wind angles for scent placement, either up or downwind. Like deer, coyotes utilize urine as a territorial calling card during the breeding season, so a spritz here and there have pausing powers. My go-to for coyote urine is Wildlife Research Center’s Coyote Juice.

Your final coyote rut ruse includes visual deception. My experience in any calling situation, from elk to turkeys, is that when an animal arrives, it expects to see the maker of the sound. Coyotes similarly look for the loudmouth trespassing yapper. My go-to decoys have been my border collies over the past decade. Depending on the season and situation, sometimes I allow them to engage the coyotes, while other times they sit and look pretty. That sitting posture, especially in dim light, resembles a coyote and most incoming coyotes curiously circle for one last look.

My dogs have spent hours in coyote country with numerous encounters. This experience sinks in, and they understand the nature of the game. Your Corgi or Shih Tzu may need help understanding the danger involved. Instead of risking a veterinarian or pet cemetery visit, consider using a decoy.

Coyote decoys range from taxidermy mounts to full-sized 3D models requiring some sweat equity to take to the field. To avoid toting bulky, clumsy, and noisy decoys, consider folding models like those from Montana Decoy Company. These lightweight, compact, realistic decoys can be easily packed into calling sites near and far and deployed with simplicity. The Song Dog decoy is constructed using a high-definition image of a coyote, and it folds into a small package and unfolds instantly. Stakes maintain the shape of the animal and keep it grounded even in a stiff wind. 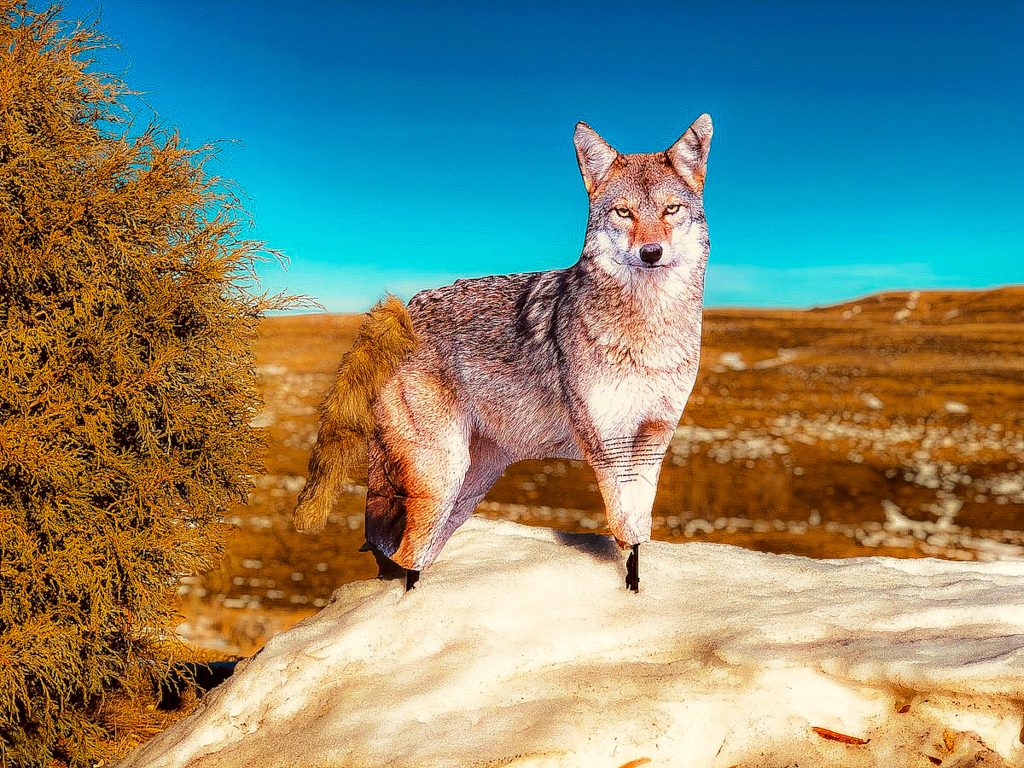 Recently, one of my most memorable rut hunts included my current decoy dog Sully and a pair of coyotes investigating howls. The team disappeared in a coulee, allowing me to reposition for their downwind approach. Sully sat diligently beside me, and when the first coyote appeared, I whispered, “stay.” Sully did not need to engage as the coyote was eyeing him angrily. I yipped, and the coyote hit the brakes for a Hornady happy ending. As Sully delivered the coup, I scanned for the second coyote, but it used the big coulee as an escape tunnel. No worries. The rut is just starting, and a howl later in the month could deliver that single into another coyote rut trap. 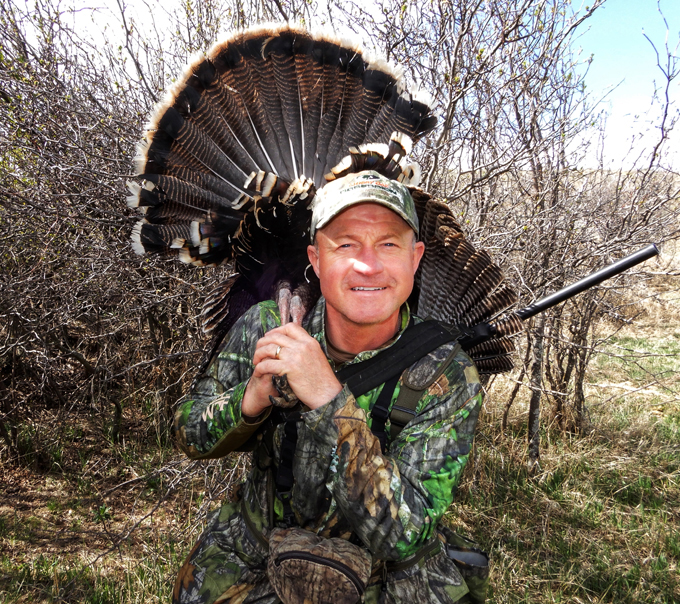