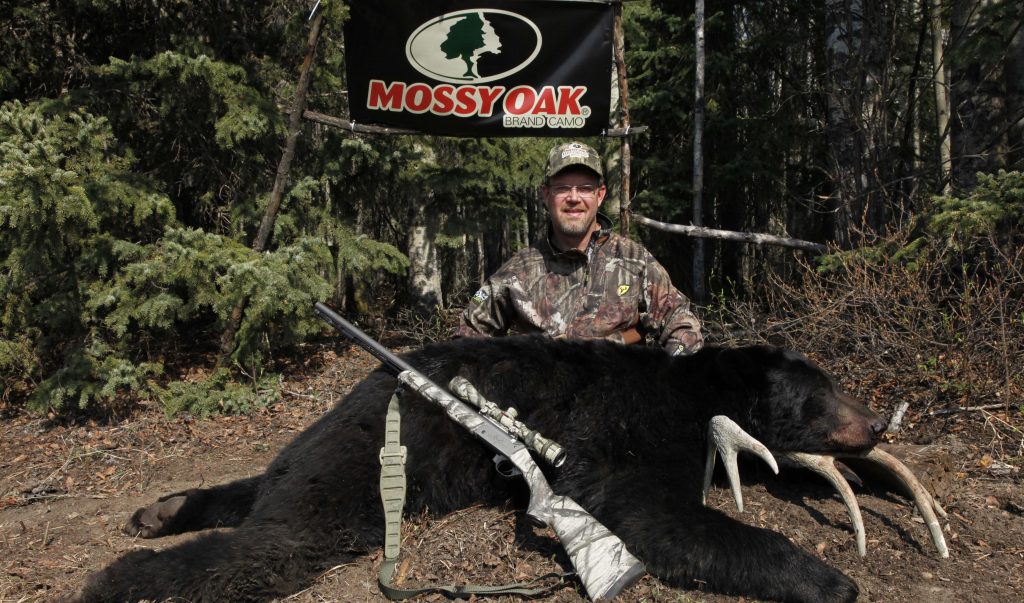 A set of black ears poked over the edge of the hill, and I could feel a surge of adrenaline course through my body. The slight movement caught my eye, and although the bruin was silent, his blocky, black body quickly filled the skyline. I had been sitting in my ground blind, checking out the shooting angles to ensure I could draw my bow if given the opportunity. However, I never expected to see a bear that early in the afternoon, eye-to-eye.

The bear sauntered towards me, and I tried to hold every muscle in my body perfectly still. I could see the bear’s eyes scanning the horizon and, with him facing my blind, the slightest movement would alert him to my presence. It was a nice mature bear with a thick hide, and as he passed directly upwind of me at less than 10 yards, I could see the muscle tone in his legs and jawline. 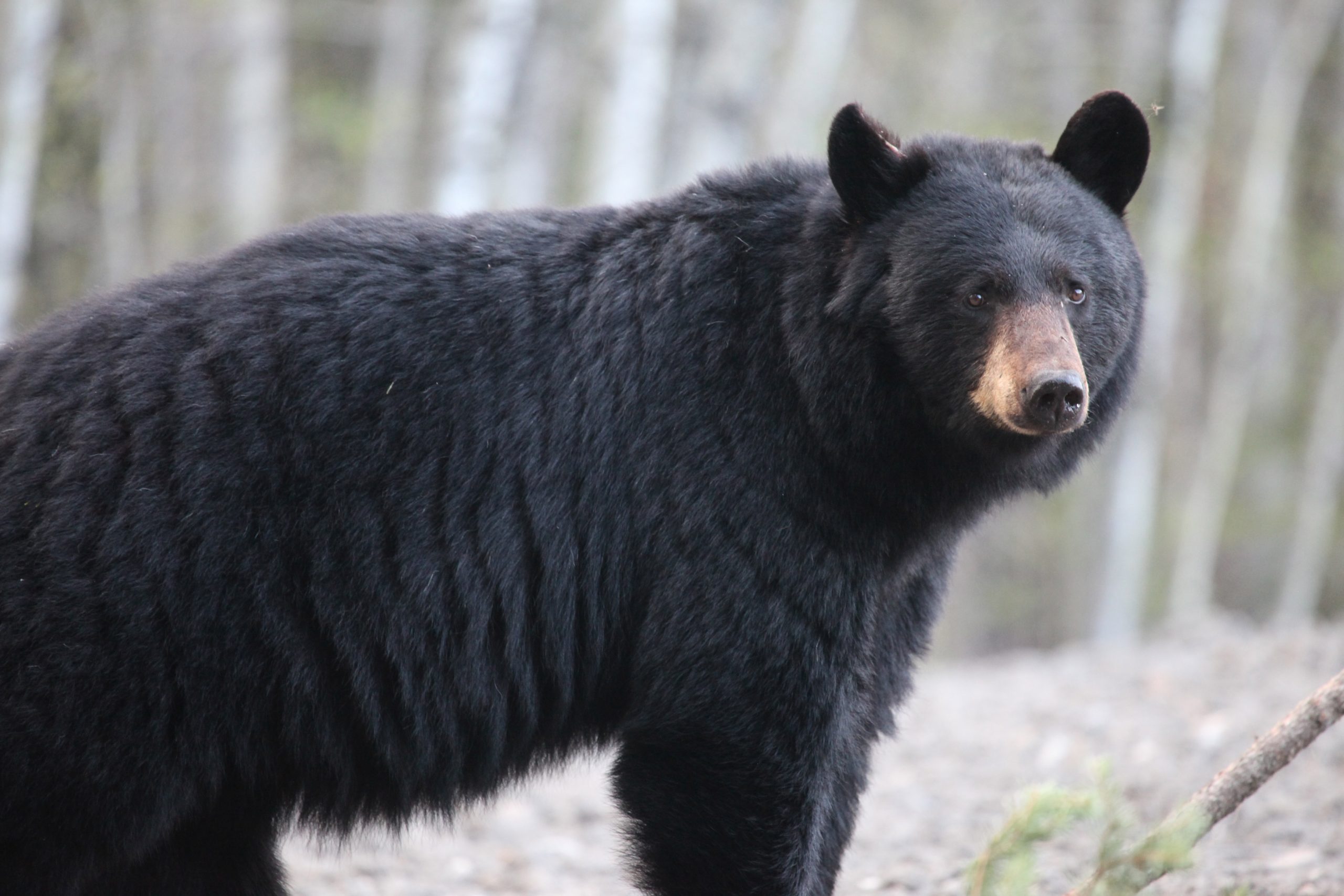 I have hunted bears for years but have always opted to sit in a treestand. This was the first time I used a blind and set up an archery shot on the ground at less than 15 yards. It was pretty exhilarating, and I watched the bear feed contentedly, being close enough to hear every slurp and swallow.

I was hunting in a remote area of Alberta. My outfitter was a big believer in hunting the bears from the ground and offering level shot opportunities with clean kills. With no angled shots to compensate for, like in treestands, there is seldom a bear that needs much tracking, providing eye-to-eye action with your quarry.

I understood a real good bear was coming into the site that would be easy for me to misjudge or be tempted to shoot. However, the real big bear usually didn’t show up till just before dark. I could hear the advice and warning in the back of my mind as I watched the nice bear feed in front of me. I thought I had a front-row seat to a National Geographic special on the behavior of black bears when the show came to a quick stop. The wind swirled, and the bear’s nose picked up on my presence immediately. He walked to the edge of the trees and crashed off through the brush, disappearing a short distance into cover.

I was pretty wired by the activity, and with senses, on high alert, I couldn’t miss the slight rustle of dry leaves on a game trail behind me. I slowly turned and watched through the trees as the outline of the same bear came sneaking back directly downwind of me. As the bear got close, I opted to set down my bow and pick up my Traditions muzzleloader, just in case things got even more nerve-racking. 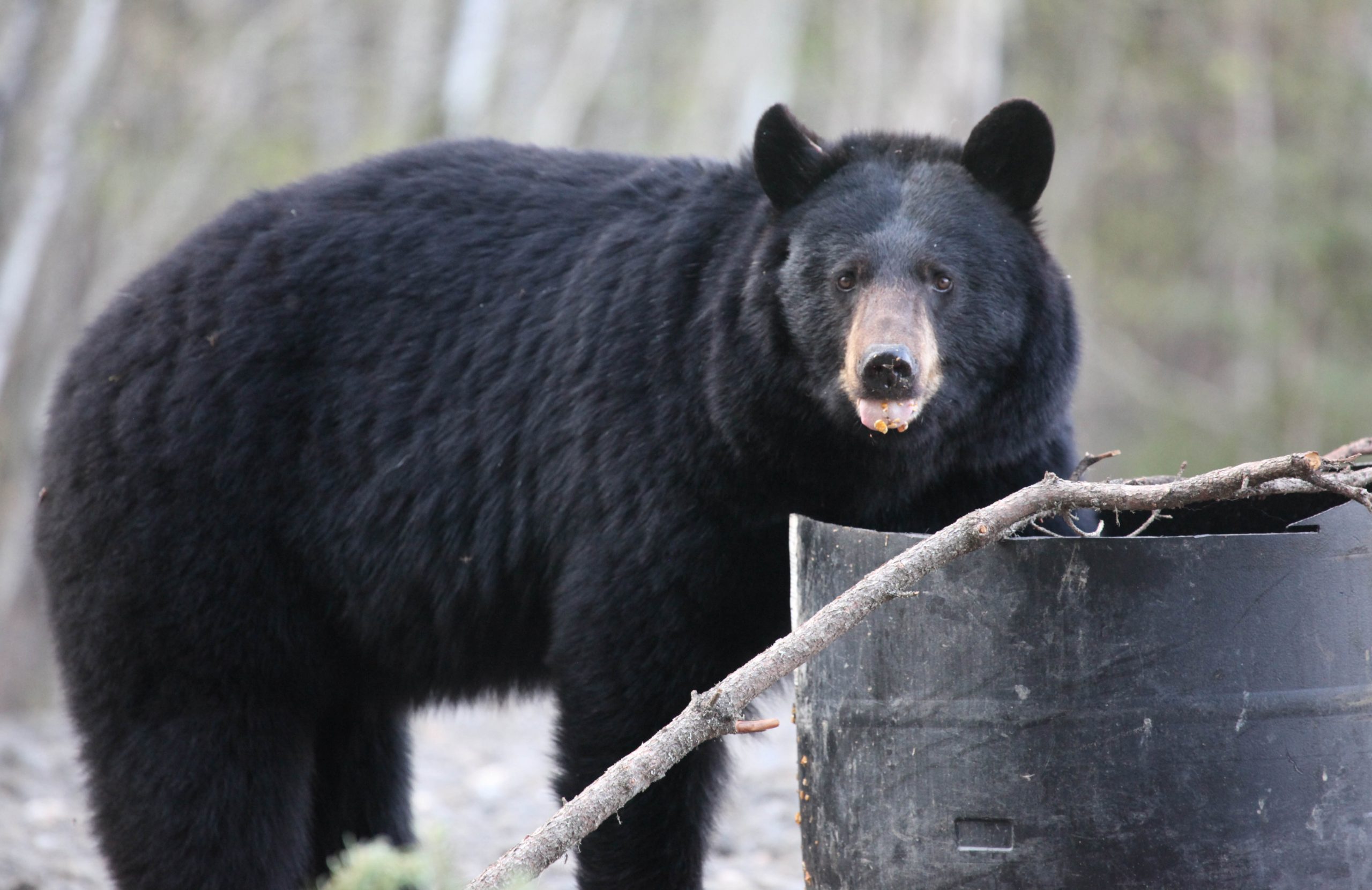 The bear walked within three yards of me and stretched out his nose towards me to get a good whiff. My camouflaged outline blended in so well I could see his eyes scanning my blind to try and find what he could smell. The bear seemed peaceful, but out of the blue, he lifted a paw and slapped the ground in front of him as hard as he could. It scared the heck out of me, and I could feel my heart rate increase to the rhythm of a fast-set metronome. We stared at each other for several minutes before the bear’s stomach drew his attention away from me.  I had several visits from the bear that night, and sitting until dark, I never did see the real big one I was after.

The guys at the camp were disappointed that the big bruin hadn’t made an appearance and told me they had a new spot for me to try where a huge bear track just turned up. It didn’t take much to convince me, and the next afternoon I was seated on a quad headed deep into the untouched forest. Dropped off in the middle of nowhere, I heard the quad fade into the distance.

I quickly assessed the area and decided I couldn’t set up for a bow shot with the wind and cover. I backed off about 75 yards, set up a ground blind, and used my Traditions Pursuit UltraLight muzzleloader. I was busy putting the final touches on my blind and situating my pack when I heard heavy footsteps coming through the forest. The bear had heard the quad come and leave and took it as a cue to come to check for new food options. I knew the bear had to be big the way he stomped towards the site with confidence and without fear. I was glad I had backed down the line to set up my blind as the bear approached from my side and stopped for a second on the edge of the line just 30 yards in front of me. When he poked his head out of the trees, I knew beyond a doubt that it was a bruiser.

I took a deep breath and waited for the bear to expose himself and offer a broadside shot. I slowly cocked my gun and watched as the bear walked into the open. The boar’s belly hung low, and his hide rippled with each step he took. I found the bear in my scope, settled the crosshair behind his front shoulder, and slowly squeezed the trigger. Boom! A cloud of gray smoke obscured my view, but I heard the bear spin and ran back down the trail from where he had approached. The bear splashed through the water, creating an audible trail that was easy for me to track. The woods fell silent.

I reloaded and slowly made my way to where the bear entered the trees to pick up the trail. I followed the huge tracks and mud-stained water about 60 yards before finding the beautiful boar. 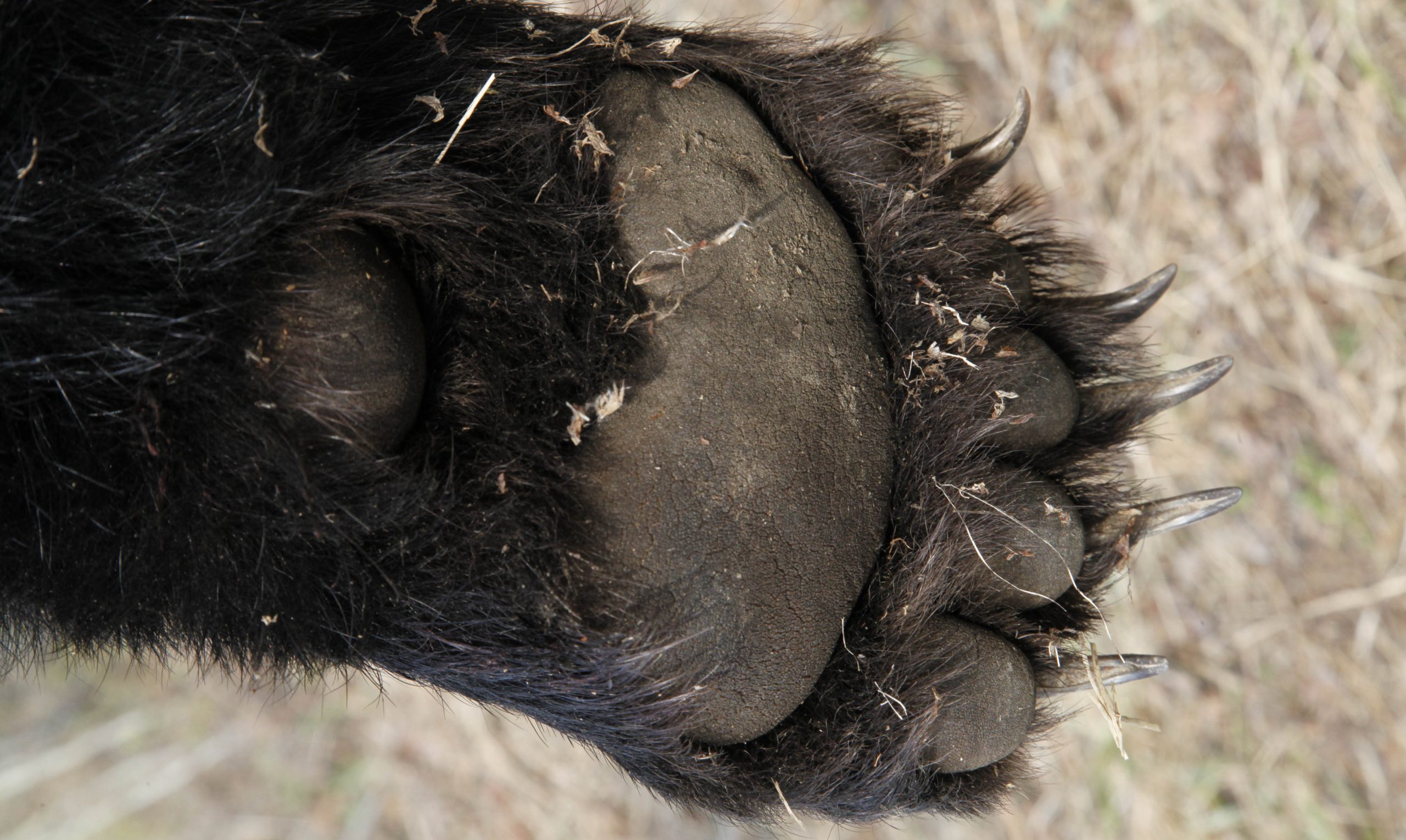 The bear was too big to handle on my own, so I flagged the trail, and when my ride arrived shortly after dark, we both strained to load the big bruin onto the quad. It was a slow and weighted ride on the way out, and I couldn’t help but stare at the big bruin that had almost walked out on top of me. 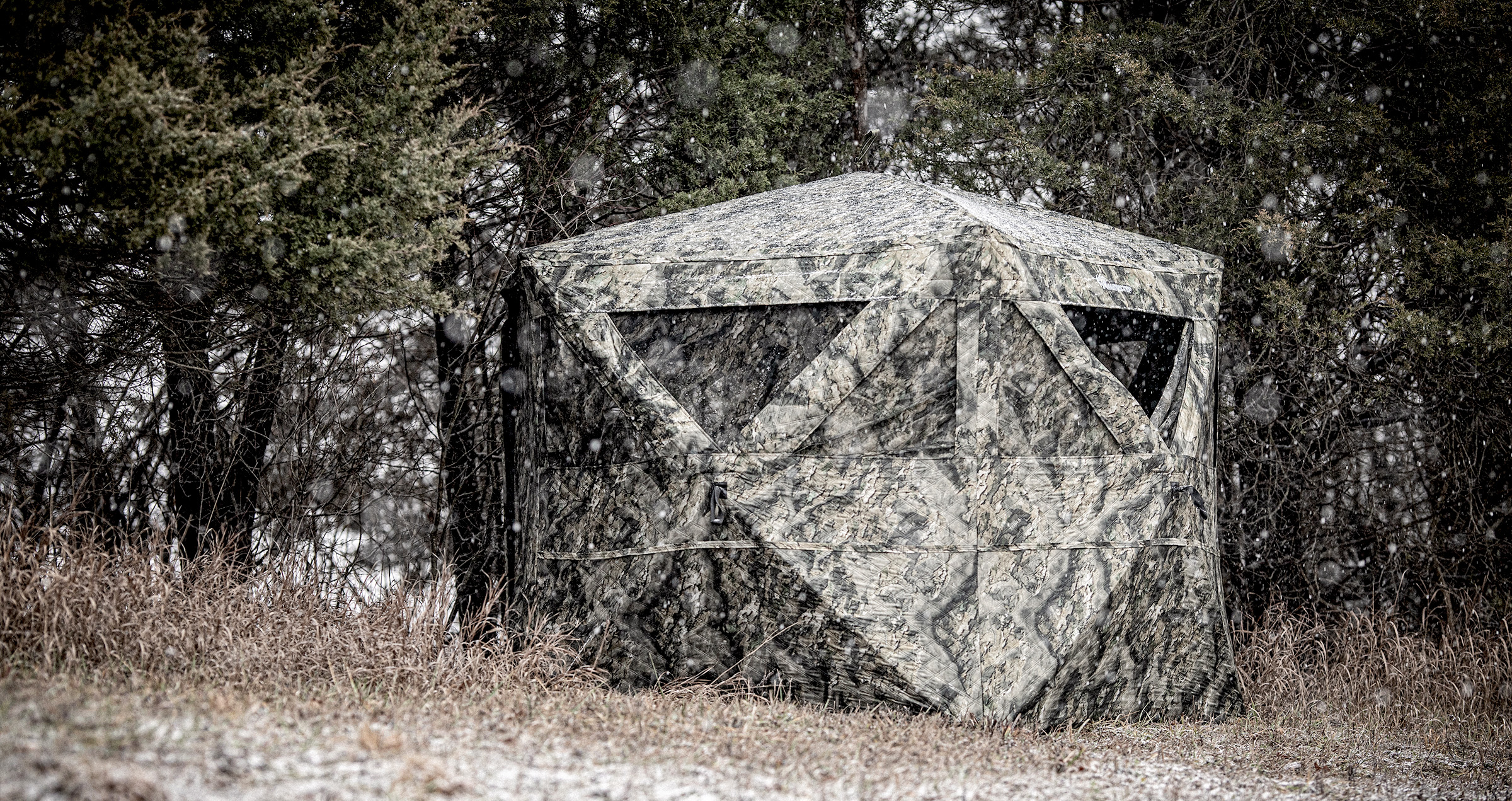 The Pro Series Thermal Blind provides visual concealment, wards off the elements and cold, and helps contain human scent. The five-hub design creates an asymmetrical shape that can hold up to four people. It is wrapped in warmth, with heavy-duty welded fabric adding insulated protection on the roof, walls, and windows. Silent-slide windows/mesh allow you to stay quiet and stealthy until it is time to shoot. The ShadowGuard coating eliminates shadows and silhouettes, allowing movement in the blind, even when game is close. With 12 large windows, eight triangular, four verticals, every angle is covered. The blind comes with a carry bag with backpack straps, cam buckle tie-downs, carabiner, and ground stakes. If you plan on hunting the cold-weather seasons, this blind will keep you in the game all day. For more information, go to www.ameristep.com. 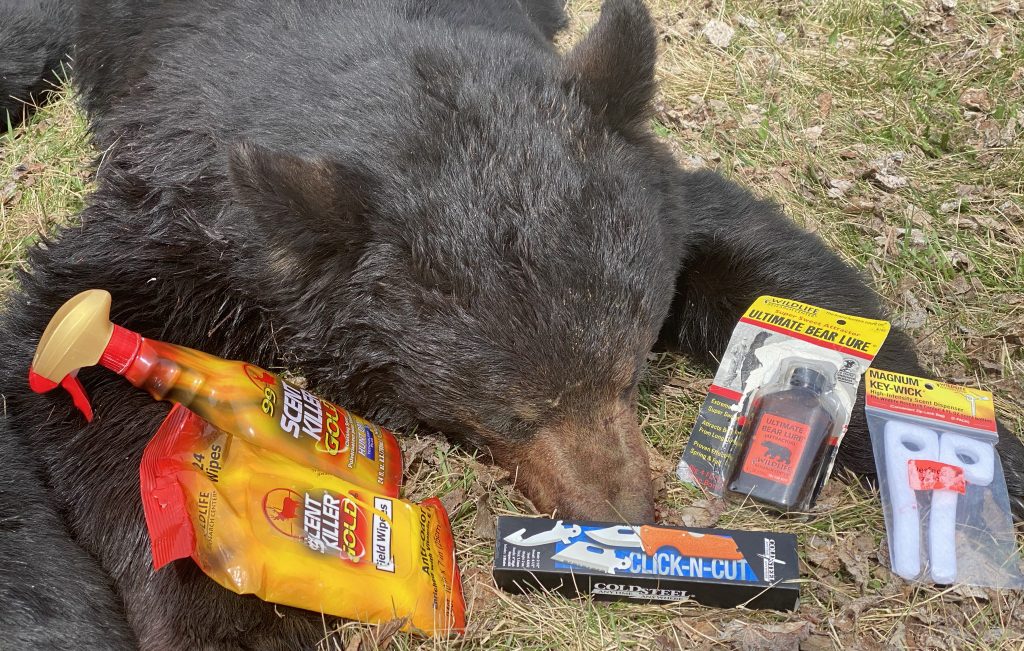 Wildlife Research Center Ultimate Bear Lure is a great way to attract bears. When set up strategically, it can produce the perfect shot opportunity. It is made with a powerful, extremely intense, burning, sweet-smelling attractant with hints of fruit, anise, and other aromatics that force you to keep sniffing the bottle. Besides hunters, bears cannot resist it and often come straight in when deployed on a wick.

Made with a special synthetic felt, a Pro-Wick will not alter or change the smell of your lure but does suck it up and hold it like a sponge. Designed to hang in a tree, it will disperse scent and draw game from a wide area. The wicks come in a four-pack and resealable zip lock bag.

For more information, go to wildlife.com