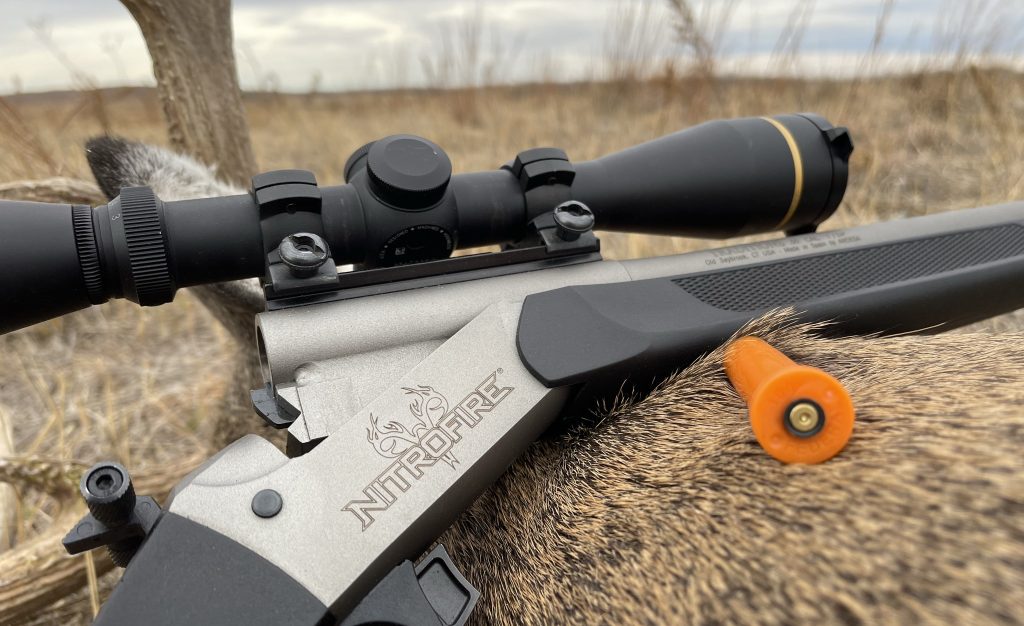 Spending three days in the basement of the Federal Premium ammunition production facility was special. I tested the new Federal FireStick, a self-contained powder charge in a polymer casing, ready to load into a Traditions NitroFire muzzleloader. Time at the facility allowed me to test the accuracy and velocity and the rifle and propellant with different bullets.

The results were impressive, and with industry standards, a chronograph was set up 10 feet from the barrel to record the velocity of five shots for each of two bullets. The ignition source was Federal Premium Muzzleloader 209 primers. 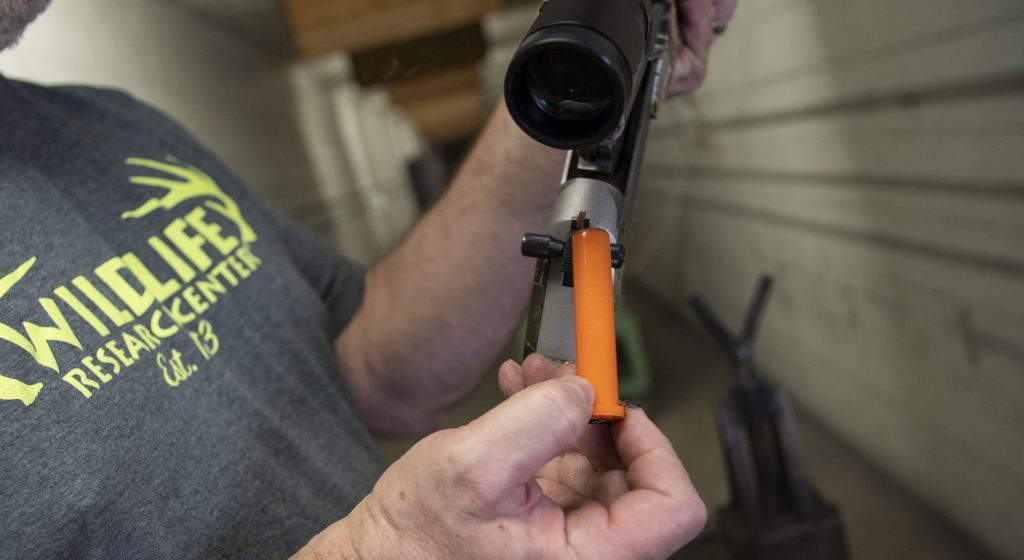 The NitroFire and FireStick system exceeded the acceptable industry tolerance of 75 fps variance by close to 42 percent. The velocities were in the same range as other propellants, like Pyrodex, Blackhorn 209, and Triple Seven. The convenience, consistency, and protection against the elements made the FireStick a natural choice for hunting. 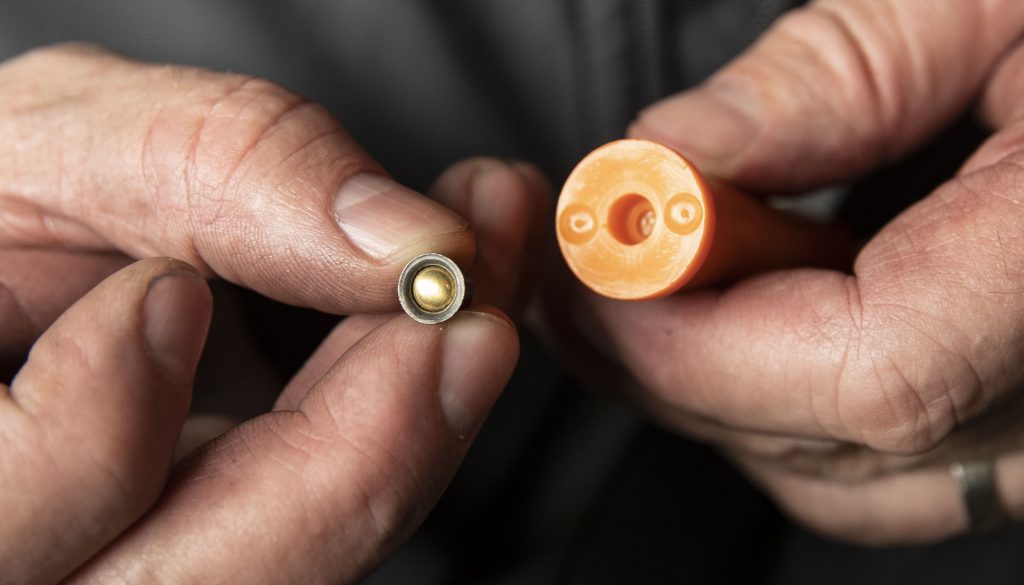 The Nebraska Sandhills was the perfect place to put the NitroFire and FireStick to the hunting test. The rolling hills of grass flow to the horizon, offering diverse habitats that support mule and white-tailed deer.

The Sandhill region offers mule and white-tailed deer for harvest under the same license. Goose Creek Outfitters with Scott and LaCaylla Fink has become an annual destination. They have become great friends over the years, and deer quality improves every time I return. I learned years ago never to decide my priority on a hunt, as the deer would dictate direction.

The trip was the first to hunt with the new Traditions NitroFire .50-caliber muzzleloader. The new technology in the inline rifle is ground-breaking—no more breech plug, measuring powder, or fumbling to pour the propellant down the barrel. The Federal Premium FireStick is inserted directly into the barrel where there would characteristically be a breech plug. A 209 muzzleloader primer inserts into the FireStick, making it ready to load and fire. The bullet is still loaded down the barrel and sits on a ledge to guarantee the FireStick sits directly under it for consistent energy. It has simplified muzzleloading without increasing the performance compared to other black powder substitutes. It allows the hunter to embrace the challenge of muzzleloading with fewer accessories and more safety.

The FireSticks are charged with a new propellant from Hodgdon Powers called Triple 8. It burns cleaner than other Pyrodex or Triple 7 powders, significantly reducing fouling and cleaning. The premeasured FireStick loads come in 100 or 120-grain options.

Hunting a large ranch with agricultural pivots and pastures of native grass provided the best of both worlds for the deer. The tall sandhills are ideal for lookouts and spotting deer. The first evening out produced many sightings, with white-tailed deer running shelterbelts and through standing corn. However, a huge mule buck grabbed my attention and stood out like an elk compared to his does. Scott and I watched for an opportunity to make a stalk and played cat and mouse with the deer for several hours but never closed the distance. There were too many eyes, and the deer worked harmoniously to ensure one was always watching behind. 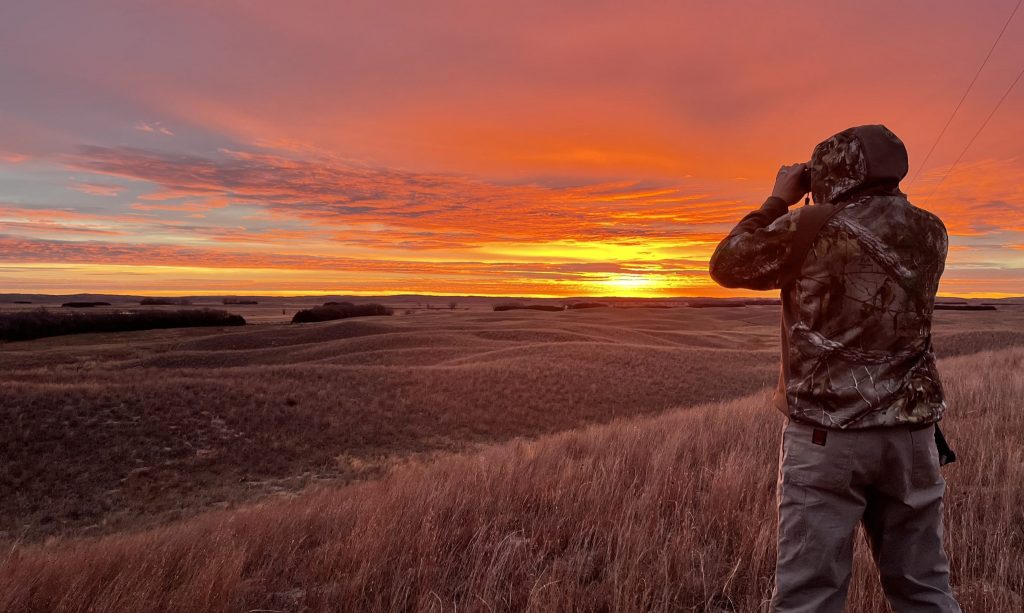 The tall-antlered mule buck consumed my thoughts and plans. My clothes were prepared with a wash in Scent Killer Gold and then sprayed with Scent Killer when headed afield. We accidentally bumped the deer, and the last we saw of the buck and his harem, they were heading over a ridge several miles away. The deer were secretive the next day, and when we finally found them, they headed for safer ground.

It was day three of a four-day hunt, and I was anxious to return to the field. The November rut and the moon phase made it a special morning to be a deer hunter. The eastern horizon cracked with lava-like volcanic light. We encountered wildlife at every turn. Scott focused on the road for deer, and when we neared our hunting area, the truck’s headlights caught a buck running down the road in front of us. The tall, wide antlers left little doubt that it was a mature buck.

Stopping the truck, we watched the deer trot down the road and through the shallow ditch, following the fresh scent. The deer was focused and kept a steady stride before cutting across a pasture and disappearing over the hill. I knew we had to make a stalk, even though the deer showed no intentions of slowing down. With daylight breaking the horizon, we parked where we last saw the buck, loaded the NitroFire, and headed up the hill.

We hiked as fast as possible, hoping to get to a vantage point, but before we got to the crest, Scott threw up his hand to stop. Three deer across the draw came into view, and we quickly got binoculars on them. The buck had caught up with the doe leaving scent. However, a smaller buck was already courting her, causing the deer to mill. As the deer tried to sort things out, we got the shooting sticks positioned and ready for a shot, and I settled in behind my rifle. Scott ranged the bigger buck at 152 yards. The doe watched us, but the bucks stayed focused on the rut and a potential fight. The crosshair followed the buck until he stopped broadside. I cocked the hammer on the NitroFire and slowly squeezed the trigger. The Carnivore bullet hit the deer right behind the shoulder, and it dropped its head and ran hard uphill. The buck only made it a short distance before falling and sliding back down the steep hill. The third day was a charm.

The Traditions NitroFire shot as accurately as when tested in a controlled environment, proving its value on a hunt. The Federal FireStick made for easy loading and clean up at the end of the day. 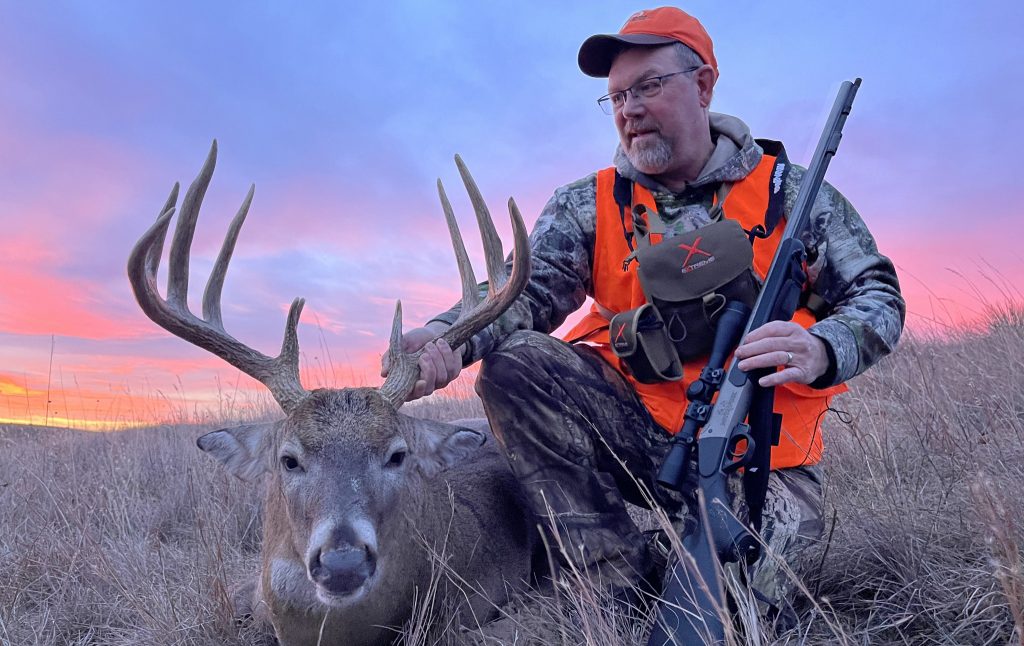 The NitroFire muzzleloader is a break-action, .50 caliber inline rifle with a 26-inch ultralight Chromoly steel fluted and tapered barrel with VAPR 1:24-inch twist rifling. The faster twist stabilizes bullet flight and extends range. The rifle includes components like the Dual Safety System and Traditions’ new Elite XT trigger system. The trigger system has a rebounding hammer, a captive half-cock, and manual cross-block trigger safety. The Elite XT trigger allows the action to be broken open with the cross-bolt safety engaged. You can load or unload the muzzleloader and view the chamber. The NitroFire is available in ten configurations of finishes and optics options. Traditionsfirearms.com

Traditions Smackdown Carnivore bullets are for the hunter that wants to use one projectile for everything. Its design is for whitetail and medium to large game. Available in various weights, the Carnivore bullet also uses the Ridgeback Sabot.